By Yang Sung-jin
Published : Sept 8, 2021 - 18:23       Updated : Sept 8, 2021 - 18:23
On Saturday, photos of a Jeju Air airplane featuring BTS’ Jimin on its exterior circulated on Weibo as part of a BTS fan club’s campaign to celebrate the K-pop star’s 26th birthday. K-pop fan clubs often celebrate the birthdays of their stars by buying advertisements in newspapers, on public transport or on subway billboards.

But the photos sparked serious backlash in China, and Weibo banned the fan club-run social media account with over 1.1 million followers from posting for two months over what it called “illegal fundraising.” Weibo imposed the ban not only on the BTS fan club but also on other fan accounts devoted to well-known K-pop stars, including NCT, EXO, Blackpink and IU, pledging to stop “irrational star-chasing behavior.”

The sudden clampdown on South Korean pop culture came after Chinese President Xi Jinping led a campaign to strengthen control over a range of sectors, including online gaming, private education and cultural content, including K-pop music.

It was not the first time Chinese authorities put restrictions on the distribution of Korean content, but the latest move, given its scale and nature, appears worrying enough to prompt Korean media and brokerages to analyze the repercussions.

Major Korean newspapers and TV stations reported Weibo’s ban on the K-pop fan accounts, saying the crackdown followed an announcement from the Chinese authorities last month about tougher measures to control the so-called “fandom culture.” Under the new guidelines, Chinese regulators are preventing youngsters from spending money to support their idols while banning online lists that rank celebrities’ popularity -- part of a drive to “clean up” fandom culture.

A number of critical comments were posted on Korea’s major portal news sites criticizing China’s “excessive” control of the entertainment industry. “It is time for local entertainment agencies to forget about the Chinese market,” a user on Naver News said. Another user commented that the fan club operators should not be blamed as BTS fans were celebrating voluntarily. 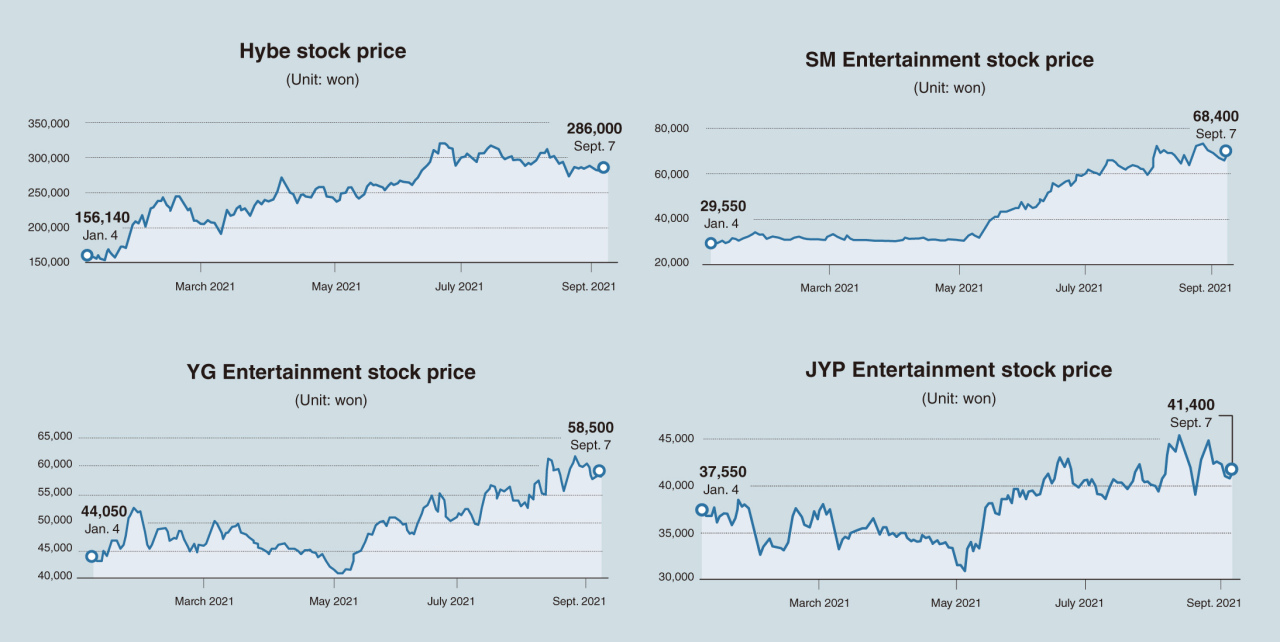 A Korean brokerage said in a report on Tuesday that China’s latest crackdown on Korean celebrities and fandom culture was unlikely to have a critical impact on the domestic K-pop industry in the long term.

China has been keeping tight control of imports of Korean cultural content and other products ranging from cosmetics to water purifiers since 2016 over the deployment of the THAAD missile defense system.

Mirae Asset Securities in Seoul said the related shares dropped by 9 percent from their recent highs, but the impact is likely to be limited, largely because Korean entertainment companies have already cut down on their dependence on and trust in the Chinese market, which is fraught with complex regulations.

Since the beginning of this year, the four major entertainment agencies have witnessed a rise in share prices, following an uptrend in the broader market. In the year to date, shares of Hybe, the company behind BTS, rose 95 percent and S.M. Entertainment shares climbed 124.1 percent. During the same period, shares of YG Entertainment and JYP Entertainment went up 30.7 percent and 8.3 percent, respectively.

“Profits of entertainment agencies are unlikely to be seriously affected by the Chinese clampdown on K-pop fandom,” said Jay Park, an analyst at Mirae Asset Securities. “The revenue of album sales in China account for 0.6 percent to 2.0 percent for Korea’s four major agencies.”

The sharp rise of K-pop album sales outside of Korea is largely led by the US and other countries across the world, with China lagging far behind.

One of the reasons for downplaying the Chinese impact is that Korean agencies are diversifying their business models to include merchandise sales, online concerts and digital music releases, especially after the COVID-19 pandemic reshaped the entertainment industry in general.

In addition, top-ranked stars and groups with the four agencies -- Lisa of Blackpink, aespa, Twice, Stray Kids and others -- are scheduled to release new music starting in September.

New, next-generation groups are also readying to foray into the competition, which is expected to nurture their own fan groups in a way that bolsters the artist portfolios of the agencies going forward.

Since 2000, Korea’s K-pop industry has undergone a series of dramatic transformations. S.M. Entertainment and YG Entertainment spearheaded entry into the Japanese market and proved the value of their marketing strategy by focusing on Japan’s unique idol fandom culture.

In the years that followed, agencies rode the YouTube bandwagon and digital music platforms to reach out to fans across the globe. As demonstrated by the success of BTS, Blackpink and Twice, agencies with artists supported by global fandoms came to solidify their market positions, and share prices reflected this.

Last year, entertainment agencies hit a major challenge with the coronavirus, which made it impossible to run offline concerts and other events such as fan meetings, disrupting the conventional marketing strategy and business model.

Hybe, which rapidly drew talent from diverse sectors, built its own digital subscription platform for BTS, while entering new business categories such as gaming tailored for BTS fans and strengthening the merchandise business.

Due to the proliferation of contactless culture, Hybe organized online concerts on a large scale. It is estimated that online concerts during the COVID-19 period sold 200,000 to 800,000 tickets. Since there is no limit to the number of online viewers and agencies have also linked the events to merchandise sales, their profits tend to stay at a high level. Other agencies are following suit by developing their own platforms, and by diversifying income structures and target markets.

As far as global platforms are concerned, the agencies continue to use YouTube and Spotify to publicize their artists and distribute digital content for the global market.

In the process, for Korean entertainment firms, China has been put on the back burner in terms of marketing and sales, as the neighboring country has kept tight control over the distribution of Korean content in recent years.

The Chinese government’s crackdown on fandom culture is not limited to Korean stars. Popular Chinese celebrities such as Fan Bingbing, Zheng Shuang and Zhao Wei have also suffered setbacks after being dealt heavy fines or having their film credits removed, reflecting the deepening anti-celebrity policies in China.