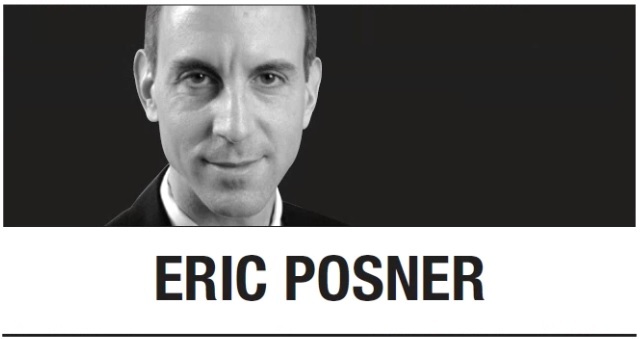 US President Joe Biden’s speech defending the withdrawal from Afghanistan announced a decisive break with a tradition of foreign-policy idealism that began with Woodrow Wilson and reached its apex in the 1990s. While that tradition has often been called “liberal internationalism,” it also was the dominant view on the right by the end of the Cold War. The United States, according to liberal internationalists, should use military force as well as its economic power to compel other countries to embrace liberal democracy and uphold human rights.

Both in conception and in practice, American idealism rejected the Westphalian international system, in which states are forbidden to intervene in others’ internal affairs, and peace results from maintaining a balance of power. Wilson sought to replace this system with universal principles of justice.

During World War II, Franklin D. Roosevelt revived these ideals in the Atlantic Charter of 1941, which declared self-determination, democracy, and human rights to be war goals.

But during the Cold War, the US pursued a resolutely “realist” foreign policy that focused on national interest and propped up or tolerated dictatorships as long as they opposed the Soviet Union.

America’s commitment to human rights began at a moment of weakness. In the wake of the military and moral disaster of Vietnam, President Jimmy Carter and the US Congress sought to infuse American foreign policy with a moral center and reached for the language of human rights. President Ronald Reagan saw human rights as a convenient rhetorical cudgel for clobbering the Soviet Union. But both presidents continued to support dictatorships that served US security interests, and neither used military force to advance humanitarian ideals.

As the sole global hegemon, the US embarked on a large number of wars, big and small, involving a confusing melange of hard-nosed security interests and idealistic rhetoric. In Panama, Somalia, Yugoslavia (twice), Iraq (twice), Libya, Afghanistan, and elsewhere, the US launched military interventions on both national-security and humanitarian grounds.

The nonintervention in the Rwandan genocide of 1994 may have been the most consequential (non) event of this period, because it was reinterpreted with the benefit of hindsight as a missed opportunity to use military force to save hundreds of thousands of lives. The debacle was used to justify the wars in Afghanistan and Iraq, and to urge US military intervention in Sudan in the early 2000s, despite mass killings that amounted to another genocide.

All of this led to an extraordinary burst of interest in international law and legal institutions. Multiple international tribunals were created, leading to the establishment of a permanent International Criminal Court. Human rights treaties and institutions were revived and strengthened. Principles of humanitarian intervention were advanced.

It was already clear that President Donald Trump repudiated this tradition of humanitarian or quasi-humanitarian military intervention, but Biden’s forceful renunciation of it is somewhat surprising. In his speech, he repeatedly emphasized the importance of identifying and defending America’s “vital national interest.” The word “national” is key, and Biden wasn’t subtle:

“If we had been attacked on Sept. 11, 2001, from Yemen instead of Afghanistan, would we have ever gone to war in Afghanistan? Even though the Taliban controlled Afghanistan in the year 2001? I believe the honest answer is no. That’s because we had no vital interest in Afghanistan other than to prevent an attack on America’s homeland and our friends. And that’s true today.“

His decision to withdraw from Afghanistan was “about ending an era of major military operations to remake other countries. We saw a mission of counterterrorism in Afghanistan, getting the terrorists to stop the attacks, morph into a counterinsurgency, nation-building, trying to create a democratic, cohesive, and united Afghanistan. Something that has never been done over many centuries of Afghan’s (sic) history. Moving on from that mindset and those kinds of large-scale troop deployments will make us stronger and more effective and safer at home.”

Biden also did say that human rights will remain “the center of our foreign policy,” and that economic tools and moral suasion can be used to advance them. This claim is in tension with his declaration that “vital national interests” should determine military intervention.

Clearly, the role of human rights and other moral ideals in US foreign policy has been downgraded.

Of course, it was never very clear that US governments were actually motivated by humanitarian considerations. Critics often found more nefarious motives. Future historians may well argue that US foreign policy in the 1990s and 2000s was simply advancing a very ambitious vision of the national interest: America required all countries to adopt American ideals and institutions so that none would want to act against America.

In any case, idealism is not actually so idealistic when a country has enough power, and the only thing that is clear now is that America doesn’t. Resistance to its post-Cold War nation-building goals took the form of international terrorism. China and Russia did not obediently embrace democracy. And much of the rest of the world has reverted to various forms of nationalism and authoritarianism.

Many people, and not just the leaders of hostile powers, will celebrate America’s comeuppance. But it is doubtful that the moral superstructure of human rights will survive without any country willing to use military force to support it.


Eric Posner
Eric Posner, a professor at the University of Chicago Law School, is the author of the forthcoming “How Antitrust Failed Workers.” -- Ed.