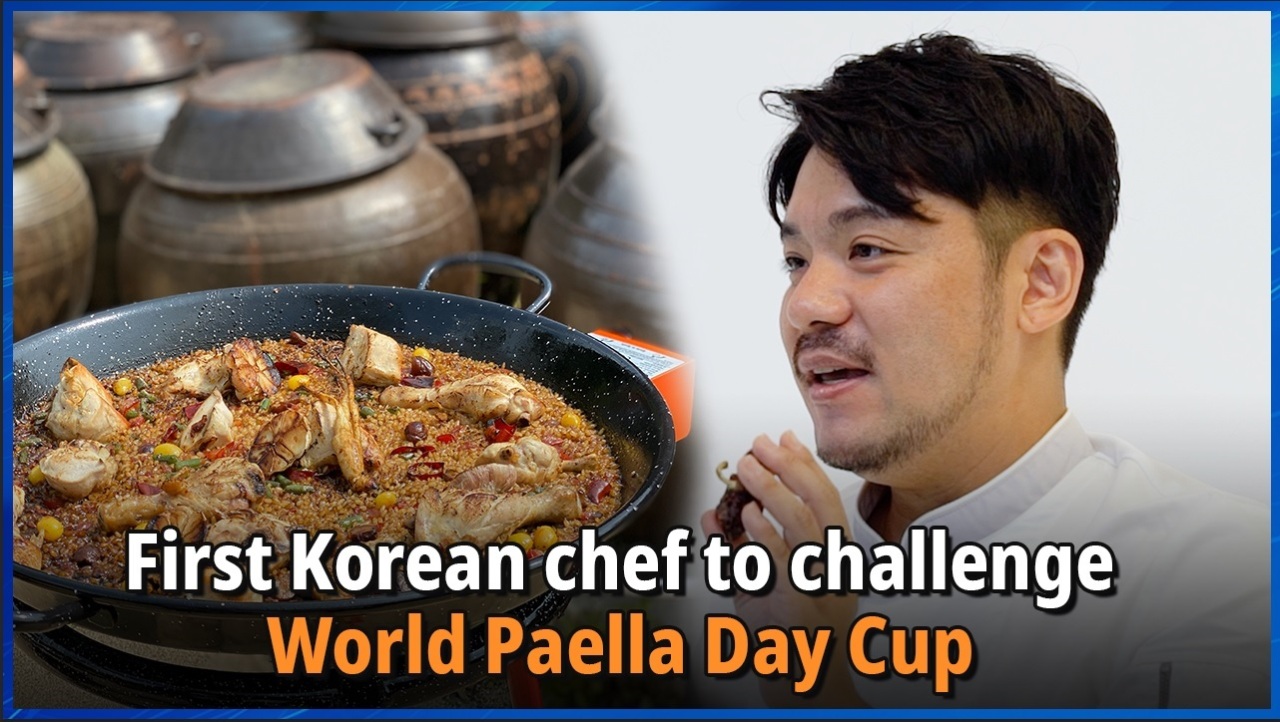 A nation’s renowned traditional dish does not always have to be cooked and served by the locals to be the best-tasting version.

Chefs from around the world today often discover their own mix of recipes, adding unique flavors while still maintaining the essence of the original.

An online preliminary round of the 2021 World Paella Day Cup hosted by the Tourist Office of Spain is currently under way to decide on the eight chefs who will compete in the final round on Sept. 20, to be held in Valencia, the home of paella.

Some 36 chefs from 20 different countries who competed in the preliminary round are waiting for the selection of the eight finalists, expected by the end of August.

A jury of professionals nominated by the World Paella Day Organization will conduct a comprehensive evaluation, based on the contestants’ professional careers, self-made paella cooking videos, total number of online votes and feedbacks and encouragements posted by viewers.

Lee Sang-hoon, 39, a South Korean chef and food lecturer, is among those awaiting the final selection.
Lee earned a master‘s degree at EUHT SantPol Culinary Arts & Kitchen Management in Barcelona in 2018, and worked as a chef at two of Barcelona’s Michelin-starred restaurants, Moments and Tickets, for two years. But this was not the path Lee envisaged when he was in college.

Having studied humanities as an undergraduate, Lee joined a private firm as a marketer. In his spare time, Lee invited peers and coworkers to his house to share his home cooked meals, a hobby passed down from his family.

“Our family had the so-called ‘well-eating genes,’” said Lee, recalling his childhood memories during an interview with The Korea Herald studio Monday. “Even in our tiny home, my mom would prepare special course menus for our family and invite guests regularly. She would take note of her own recipes that were successful. My little brother who always talked about what to eat for dinner while having lunch at the table, became an owner of a popular craft beer pub in (Seoul’s) Ikseon-dong and also owns his own brewery.”

A two-week honeymoon in Spain in 2015 became a turning point in Lee’s life.

Lee became fascinated by the concept of Spanish tapas every time the couple dropped by at a local restaurant or bar. Tapas that Lee tried seemed to add a finishing touch to the already perfect scenic views of Spain, with cheerful people relaxing in the sun over beer.

He went on to study Spanish cuisine and apply for a chef’s position.

“Since I studied humanities in college, I became a person always curious to know a region’s history, geography, and the natural environment, which connect to the story of everything, including cuisines. I asked my wife if it would be ok to book accommodations suitable for cooking instead of fancy hotels, and she kindly agreed.” Lee’s wife also being a passionate epicure, the couple visited traditional markets each time they traveled to a new place and cooked meals for themselves.

“In Madrid, pigs and cows’ intestines are easily seen in local markets, whereas in Almeria, you would find dried fish producers, which is relatively rare in Spain. In Cadiz by the Atlantic, the size of shrimp and fish are different even at a glance, compared to the Mediterranean cultures.”

Trying out fresh meat and seafood with local ingredients bought from the market was a treasured time for the couple, and was something they continued even after Lee became a chef.

The paella menu Lee invented to compete at the 2021 World Paella Day Cup is named “Samgye-paella.”

“I had to record the cooking video for the contest in the scorching summer. I came up with the idea of mixing Korea‘s traditional summer dish, samgye-tang, with Spain’s traditional paella,” Lee said. He added chicken, ginseng, milk vetch root, jujube and chestnuts on top of the basic ingredients for paella.

“I tried my best to stick to the basics, so Samgye-paella is cooked with Spanish olive oil, sea salt, not to mention, the most important, the Spanish bomba, paella rice.”

During his studies and in practice as chef, Lee felt that Korean and Spanish dishes share some common features which could make each country’s food easily approachable to the other.

“Both use garlic to add a spicy touch and Spanish cuisines use significantly less butter and cheese compared to its neighboring countries,” Lee said. “An interesting difference would be that Koreans use pots over fire as the main means for cooking, while Spanish culture makes frequent use of ovens.”

Lee shared his wishes to visit Valencia in September for the final round of the competition: “I would feel like the luckiest man on earth if I can meet the final contestants from different continents. If given the chance, I am looking forward to upgrading my skills in paella and sharing some Korean dishes with the chefs and hear their insights on Korean food as well!”