South Korea’s exports in July surged 29.6 percent to $55.4 billion on-year, a record monthly figure since the nation began compiling the data in 1956, according to the Trade Ministry Sunday. 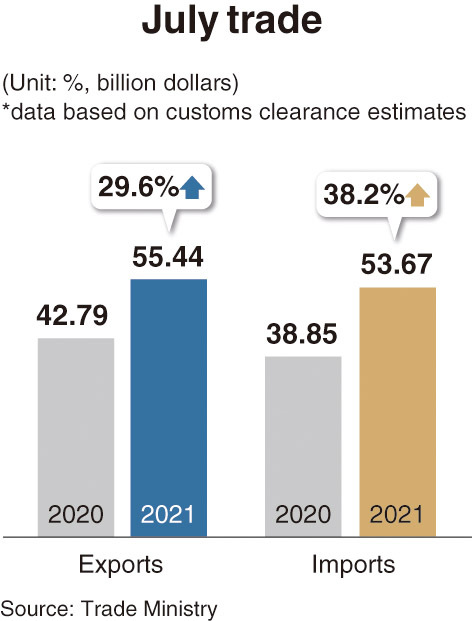 “For two straight months from June to July, exports of the nation’s 15 core products all increased, 13 of them witnessing double-digit growths. Also, for four consecutive months, Korea’s exports grew in all nine major markets,” a Trade Ministry official said.

Private and public experts, including those at the Korea Institute for Industrial Economics and Trade and the Bank of Korea, estimate the nation’s exports this year at between $601.7 billion and $610.5 billion, while its trade volume is projected at $1.15 trillion to $1.19 trillion.

The record performance was propelled by robust exports in both conventional and new sectors.

Overseas sales of chips, fueled by global server demands, spiked 39.6 percent to reach $11 billion in July on-year, surpassing $10.4 billion in July 2018 when the world was enjoying a chip “super cycle.”

In January, RAMeXchange, a research division of market tracker TrendForce, set the average contract price of an 8-gigabyte DRAM at $3.25, $3.50 and $3.75 in the second, third and fourth quarters this year, respectively. In June, RAMeXchange raised the figures to $3.80, $4.09 and $4.23. The price hike is expected to give a further boost to Korea’s chip industry.

Thanks to surging demand in packaging and quarantine products, exports of petrochemical products jumped 59.5 percent to $4.7 billion, while those of automobiles surged 12.3 percent to $4.1 billion buoyed by the global demand for eco-friendly vehicles.