The Amorepacific Museum of Art is circling back with a third edition of its collection, returning to contemporary art after a major exhibition of its Asian art from before the modern period.

The exhibition “APMA, Chapter Three” is the third exhibition presented by the museum since it has showcased the cosmetics giant Amorepacific Group’s art collection since 2019. Featuring contemporary art, the show presents around 50 artworks by renowned artists from Korea and abroad.

Installations by Korean artists Lee Bul and Choe U-ram are on display in one exhibition hall as a highlight of the show.

Lee’s work on display includes “Crush,” “After Bruno Taut,” and “Cyborg W7,” which question human desires and our frustration from our pursuit of perfection. Choe explores excessive desire in relation to technological development through his kinetic sculptures of mechanical creatures. Choe’s “Ultima Mudfox,” which is the artist’s very first Anima-Machine series, is presented at the exhibition.

The exhibition also features a special space dedicated to Korea’s renowned painter Kim Tschang-yeul who died on Jan. 5 at the age of 91. Kim is widely known for his signature water-drop paintings that he had explored for around 50 years. The dedicated space to the artist presents “Recurrence,” the painting series that started in the mid-1980s.

South African artist William Kentridge delves into the past and present of South Africa, particularly in regards to the enduring impact of apartheid policy. Although he is best known for his animated charcoal drawings, he is also an acclaimed director of theatrical productions featuring his artworks. The artist’s video work “KABOOM!” is played in the exhibition room, which tells the story of 2 million African porters and carriers who were forcibly drafted by the British, French and German forces during World War I.

The exhibition encompasses myriad themes and forms of contemporary art from the 1960s to the present. American artist Donald Judd who emphasizes the purity of objects by processing industrial materials into precise geometric shapes is among the artists whose works are showcased. His untitled work on display shows the 12 aluminum bars in different colors installed at regular intervals, highlighting their relation with the surrounding space as basic units of space and color.

Other artists include Steven Harrington, an artist and designer based in Los Angeles; Danh Vo, Vietnamese artist based in Denmark who delves into themes such as capitalism, colonialism and immigration; Rochelle Feinstein, a New York-based visual artist who is best known for her abstract paintings that incorporate text to approach both personal and social themes; and Adam Pendleton, American conceptual artist who combines images and texts that make references to diverse materials in African American history. 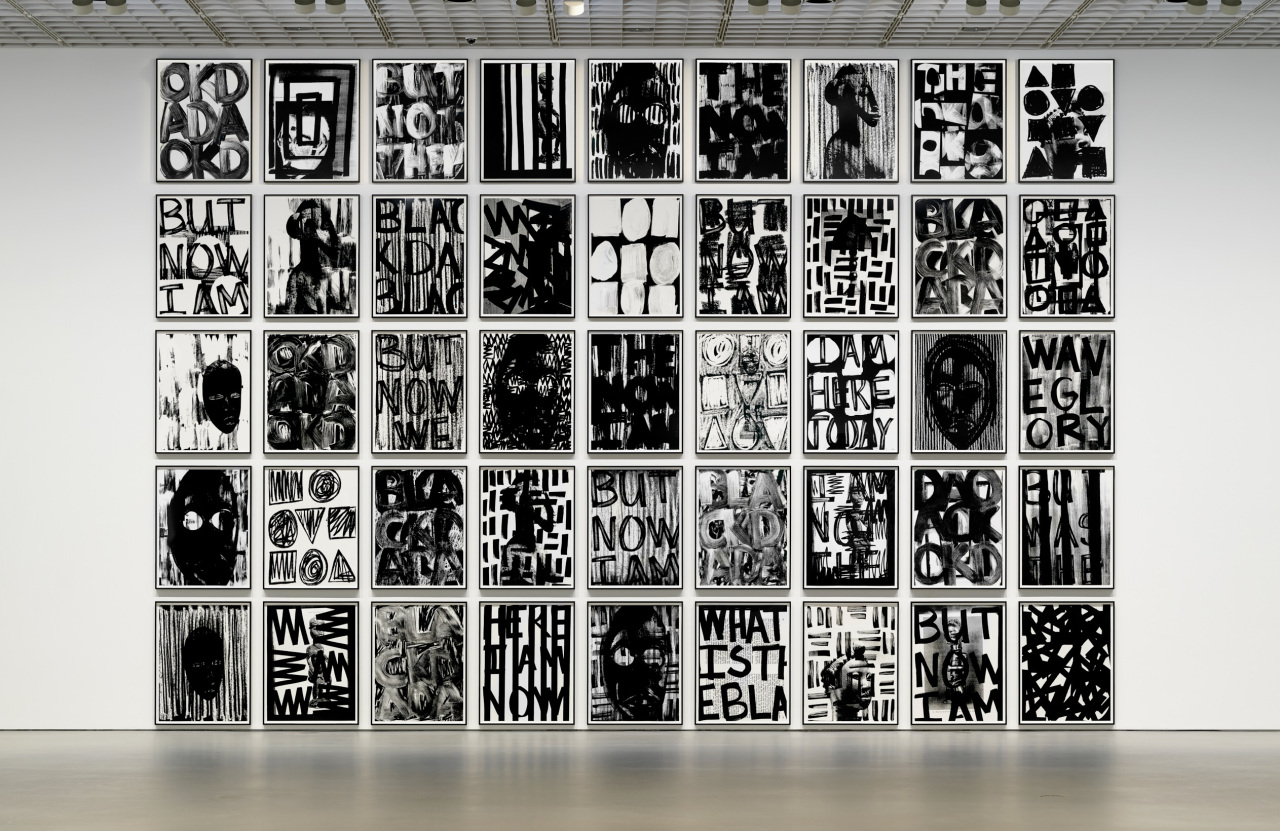 "These Elements of Me” by Adam Pendleton (APMA)
The museum’s “APMA, Chapter One” in February 2019 unveiled the company’s contemporary art collection while the second show “APMA, Chapter Two” in July 2020 featured the collection of antique art presenting 1,500 artworks and two-state designated treasures. The third exhibition, which will run through Aug. 22, shows significant contemporary artworks which were not presented in the first exhibition.

Started as the Pacific Museum in 1979, the museum was reopened as the Amorepacific Museum of Art in 2018 inside the group’s new headquarters in Yongsan-gu, central Seoul. The company’s founder began collecting Korean artworks in the 1960s when he realized the importance of cultural heritage during a business trip to Paris, according to the museum.

The online reservation is required through the museum website in advance to visiting the museum.