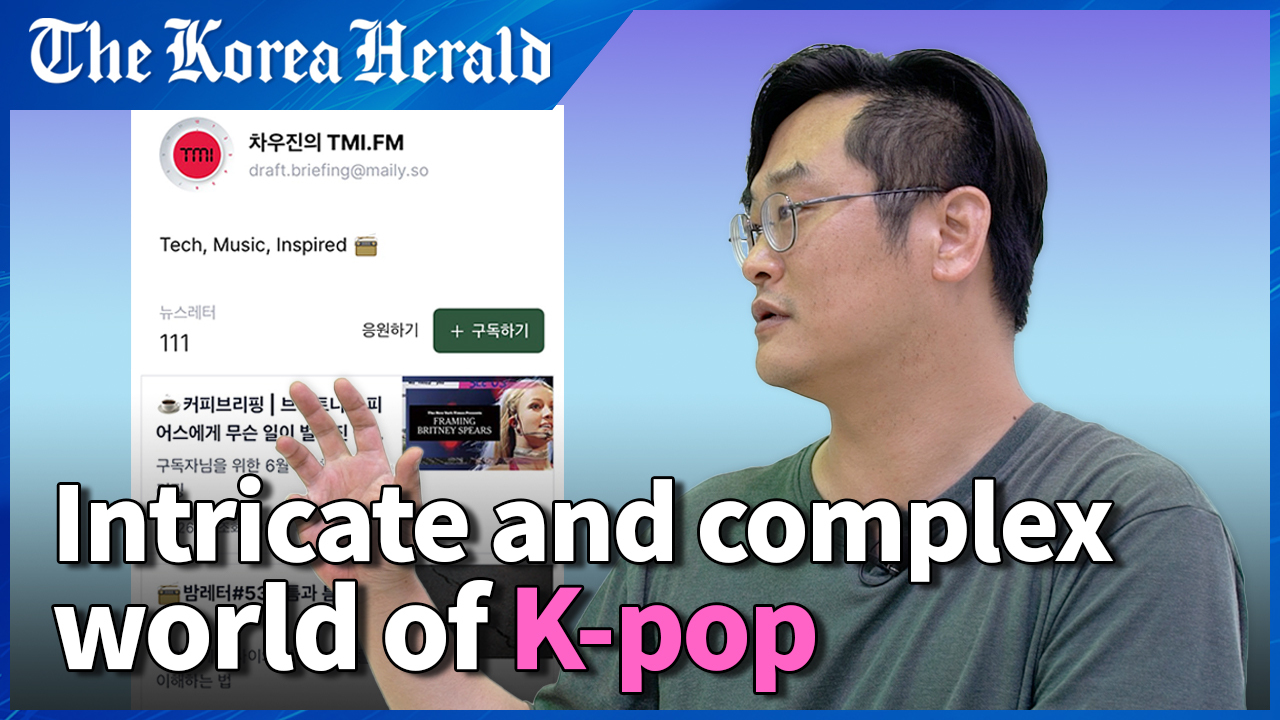 Unlike most music critics who jump into the world music at a young age, K-pop music critic Cha woo-jin confesses he was not a music lover as a youngster.

At home after school, he reached for comics, short stories and movies rather than music. Things changed when he entered his teens.

“There was a moment as a teenager when I sensed an earnest desire for music,” he said. Looking back, Cha thinks that spark came when he had grasped the meaning of the long-held definition of music -- music is the “art of sounds in the movement of time.”

Cha is the founder of TMI.fm, a music news magazine and radio startup. He is an old hand in the field, having worked at various pop culture content firms, including Naver, Magazine T, Space Oddity, Weiv and MakeUs.

Cha has worked his way up to become one of the most frequently heard critics in Korea when discussing K-pop. Cha is also known for his insights on “who is going to be the next star.”

“As a kid, I wanted to hold on to the tunes for myself in my own space,” Cha said, recalling the very first music CD he bought, which was the second album of the Exhibition, the ’90s pop duo of Kim Dong-ryul and Seo Dong-wook.

In those days, LPs were hard to come by and Cha did not have a CD player at home. “I carried the CD in my school backpack and after school randomly walked into cafes. I would order a soda, ask the owners politely, ‘Would you play the second track of this album for me?’”

Cha said that the desperation to hear the tunes made him a fan of certain albums, and eventually led him to become a fan of the singers.

Curious to know what other pop music fans are thinking, Cha has been studying K-pop fan culture.

In the 1990s and early 2000s, Korean teenage girls did not have much voice in society, and that made fan culture a big phenomenon, according to Cha.

“At that time, young schoolgirls buying music CDs and attending concerts was the sole way that the musicians could make it to the music chart rankings. Then, the media and critics would start to pay attention to them, which would be followed by interviews and invitations to do shows,” Cha said.

Back then, Cha explained, buying CDs was most likely the only way that the fans could have a significant impact on their favorite musicians and make their voices heard. “Nowadays, almost everyone is a fan of at least several musicians, regardless of age,” he said.

In contrast to the time when there were strict lines between one fan group and the other, Cha believes the role of fans and how they influence their favored artists have changed significantly. With the wide use of the internet and the flourishing of video content, album sales are no longer the only index of popularity. They are also not the primary yardstick in measuring a musician’s popularity anymore.

Music curation, once the exclusive domain of show producers and radio DJs, is now open to anyone. In the age of digital streaming, it is possible for anyone to make their own playlist and make it public.

“You can freely listen, view, speak, interact, and share sub contents you’ve created with others, spreading your personal thoughts on the music and the musician,” Cha said. This, he believes, has immensely expanded the power of fans over the past two decades.

Discussing today’s K-pop, Cha said that is has become much more intricate and complex in its tune, rhythm and choreography.

“You can easily hear a mixture of five to six different music genres in a single track these days,” Cha said, citing girl group Aespa’s song, “Next Level,” as an example.

In Korea, mixing up genres was once frowned upon. However, as K-pop music gained the spotlight on global stage, music experts and critics have come to realize that a hybrid form can be thought of as something new and fresh, according to Cha.

As for choreography, Cha explained that each member of a group has a unique and distinctive character. While, from the late 1990s to the early 2000s, singers of similar styles and tones were selected to form an idol group, things are very different today.

“Today, artists are not afraid to speak out and many make their own judgements on social and political issues. I think this is linked to how they perform and associate with fans onstage as well,” said Cha.

Many of South Korea’s successful musicians who have global fan bases, including BTS, have their own opinions and insights on global and human agendas, according to Cha.

Music does come in and out of fashion, and some fade away forever, just like any other culture in the capitalist society, according to Cha. “At the end of the day, fans and their fandom culture are what stay the same,” he said.

“Music and its presentation have changed in shape and form, and will continue to change. However, the bonds of fans with their love for music has continued throughout the history of pop music,” Cha said.

“Music is an emotional language, so it is important for artists and the industry to keep a close eye on the fans and bear in mind that they not only hear and associate with the music, but also interact with it,” he said.