Midsized builder holds priority, but has to raise bid to beat SBW consortium 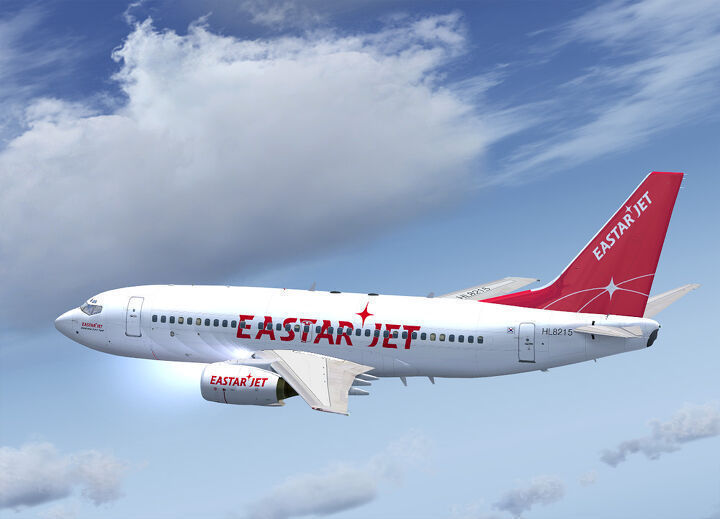 The acquisition of South Korea’s low-cost carrier Eastar Jet continues to face uncertainties, with two major bidders vying neck-and-neck as of Wednesday after rivals dropped out earlier in the week.

The two bidders are local construction firm SJ Co. and a consortium led by underwear manufacturer Ssang Bang Wool and equipment maker Kanglim, according to sources.

SJ’s bidding price is estimated to stand at 80 billion won ($71.6 million), falling short of the estimated 100 billion won offered by the SBW consortium.

Under the stalking horse bidding method, SJ would have the priority right of renewing its initial bidding amount, should the SBW consortium come up with a higher bid. In bankruptcy cases, a stalking horse bid refers to a deal with a potential buyer that is hidden from the public, creditors and the courts.

Ssang Bang Wool had seen its stock price peak at 1,445 won ($1.29) the previous day, amid expectations that its consortium would be the sole bidder. The figure, however, nosedived 24.4 percent from the previous day’s closing to 1,050 won on Wednesday, as the midsized builder rival came into view.

But as creditors of the financially distressed air carrier are expected to attribute weight to the bidding amount, the SBW consortium is still seen as having a fair chance in the game.

Eastar Jet’s incumbent debt total is estimated to exceed 200 billion won, of which overdue wages and retirement allowances account for over 70 billion won.

“It appears that the key to this bidding race is whether SJ Co. manages to secure the additional funds to catch up with the SBW consortium’s suggested amount,” said an official close to the matter.

SJ has until the end of Friday to send its written answer to the Seoul Rehabilitation Court, deciding whether it will raise its bid or give way to the higher bidder.

Earlier this week Pan Ocean, a shipping company under the wing of poultry producer Harim Holdings, effectively dropped out of the race when it did not submit a bid by the Monday afternoon deadline.

The reason for the renunciation, according to officials, was not just the price of the deal but also the uncertainties following the acquisition of the debt-ridden air carrier.

In January this year, Eastar filed for court receivership after months of struggling, as most of its flight routes were suspended amid the prolonged pandemic and its air operator certificate became ineffective in May last year.

Previously, another LCC operator, Jeju Air, had set out to acquire a 51 percent stake in Eastar for 69.5 billion won but later reduced the amount to 54.5 billion won and ended up scrapping the deal altogether in July 2020.