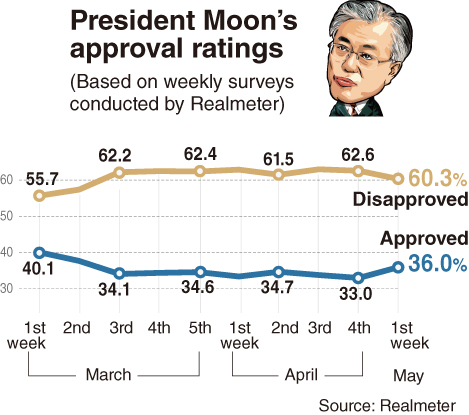 President Moon Jae-in’s approval ratings inched up to 36 percent in a weekly poll, while 60.3 percent disapproved of his presidential performance.

In a survey of 2,015 adults nationwide conducted by Realmeter on May 3, 4, 6 and 7, approval ratings went up by 3 percentage points from the week before. Those who gave the president a thumbs-down slid 2.3 percentage points.

The poll had a margin of error of plus or minus 2.2 percentage points and a confidence level of 95 percent.

Former president Park Geun-hye was excluded from the survey as she was impeached at the time.

The gap between the two main parties was 5.1 percentage points.

They were followed by the minor People’s Party (7.3 percent), Open Minjoo Party (5.6 percent) and the Justice Party (4.5 percent).

In a separate Realmeter survey on what is the most important policy task that the Moon administration should work on for its remaining 10 months, 29.5 percent chose “securing vaccines and overcoming COVID-19,” and 24.8 percent picked “stabilizing the property market.”

Among respondents in their 20s, 30s, 40s and 50s, the share of those who chose the top two important policy tasks were similar to the overall average.

Among those in their 60s, however, 31 percent chose “creating harmony among Korean people,” a much higher figure compared to the overall average of 14.4 percent.

The choice of “creating harmony among Korean people” was also more popular among conservatives at 24.1 percent.