Around 23,000 artworks owned by late Samsung chairman to be donated 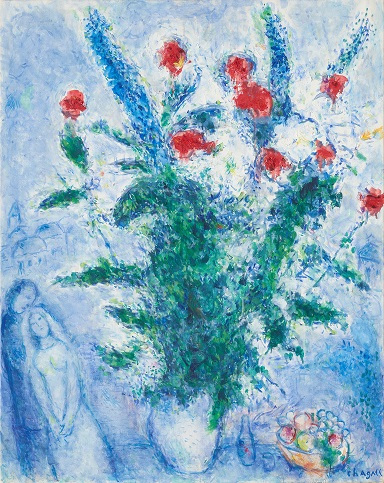 "Les amoureux aux bouquets rouges” by Marc Chagall will be given to the National Museum of Modern and Contemporary Art, Korea. (MMCA)

The late Samsung Group Chairman Lee Kun-hee’s art collection, estimated to be worth trillions of won, will be donated to public museums across the country.

The announcement by Samsung on Wednesday marks the single largest donation of artworks in Korea.

“Most of works by Lee were donated, which is the largest scale of donation (in the art field),” said Hwang Hee, minister of culture, sports and tourism, during a press briefing on the collection held Wednesday afternoon in Seoul. “Starting in June, some works will be showcased to the public at the National Museum of Korea.”

“The Samsung family is keeping with the late Chairman Lee Kun-hee’s words that more efforts should be made to raise the status of national museums,” the company said in a statement. “(The family) considers carrying out his words to be the true meaning of inheritance.”

Works by Korean masters and masterpieces from Western artists such as Claude Monet, Joan Miro, Salvador Dali and Pablo Picasso are among the modern and contemporary artworks headed to the MMCA.

An avid art collector, Lee died Oct. 25, at the age of 78. The appraisal of approximately 12,000 works of art was completed last month by three Korean appraisal bodies.

“The business of art and culture contributes not only to improving the quality of life, but also to raising the national dignity,” Lee once said, according to a Samsung official.

The donation was part of the Samsung family’s plan to pay inheritance tax on Lee’s 30 trillion won in personal assets, including the artworks. Under the current law, only real estate and securities are recognized as alternative means of paying taxes.