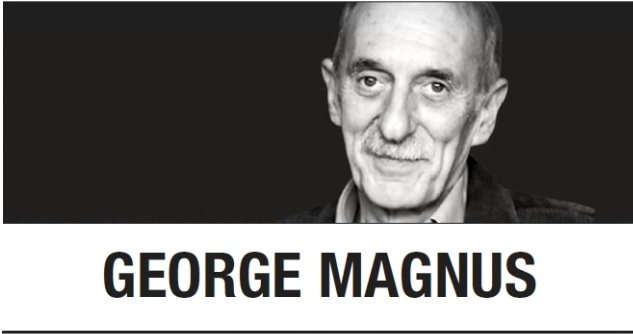 This year’s meeting of China’s legislature, the National People’s Congress, was one of the most important in recent times. China is facing its most hostile external environment in decades, with a growing number of countries pushing back against its political repression and coercive diplomacy. And the imperative of reshaping its economic-development model is more urgent than ever.

To meet the challenges ahead, China is banking on its 14th Five-Year Plan, which was officially approved at the recent meeting. The plan is supposed to ensure that China is on track to meet its grandiose longer-term goal of becoming a “modernized socialist country” -- with an Organization for Economic Cooperation and Development-level per capita income -- by 2035.

The phrase “Five-Year Plan” might conjure thoughts of production targets and coal, steel, or grain quotas. But China hasn’t issued that kind of document in more than 20 years. Running over 140 pages, the 14th Five-Year Plan comprises a broad set of economic, social, technological, and environmental objectives and targets.

To be sure, this does include grain-production targets. Yet that is but one part of a far more comprehensive strategy that reflects a growing emphasis on the link between the economy and national security.

For Chinese President Xi Jinping, national security requires not only a modernized military and internal “social stability.” It also demands action in areas like food and natural resources, commerce, supply chains, and technology.

That is why the new Five-Year Plan includes binding targets not only for military spending, but also for grain production, investment in research and development, and digital-sector growth. Moreover, it sets ambitious goals for Chinese leadership in cutting-edge sectors, such as artificial intelligence, quantum computing, semiconductors, neuroscience and genetics, and space, sea, and polar exploration.

What the Five-Year Plan does not include, for the first time ever, is a target for overall gross domestic product growth for the period. Instead, the government has pledged to keep annual growth “within a reasonable range as appropriate” -- which, according to Prime Minister Li Keqiang, means “above 6 percent” for 2021.

China will focus on implementing its “dual-circulation strategy,” according to which it will reduce its reliance on external demand, in favor of increased self-reliance. While the government will continue to emphasize exports, it will also increase import substitution and introduce supply-chain safeguards, especially where American firms are closely involved. National-security concerns undoubtedly lie at the heart of this strategy.

China’s government also has reform plans in other crucial areas. For example, the authorities want to spur rural revitalization and tackle inequality. But they have failed to commit to some crucial interventions, such as income and wealth redistribution, tax reform, and an overhaul of the country’s fragmented and grossly inadequate social-welfare system, which impedes labor mobility.

One factor underlying inequality that China’s government does plan to address is its household registration (hukou) system. By tying people to their “hometowns,” this system has often blocked migrant workers’ access to education, health care, and other social services. The new Five-Year Plan aims to abolish or ease restrictions in small and medium-size cities, and introduce a points system in large cities.

But, in the past, high costs and strong resistance have often hampered hukou reform, with new restrictions replacing those that are removed. It remains to be seen whether the same will happen this time.

China’s government also wants to encourage an “appropriate birth rate” to address the looming economic drag caused by population aging. And there are proposals to raise the low statutory retirement ages “in a phased manner.” Both of these reforms are long overdue. But plans to implement them lack detail.

Ultimately, China’s government is going to give priority to its $1.4 trillion science and technology strategy, aimed at achieving self-reliance in advanced technologies. Semiconductors, which form the core of such technologies, are vital to achieving this goal.

Here, China is not starting from a strong position. It can currently meet just 16 percent of its own, mostly low-end, chip requirements through domestic production, and the value of its semiconductor imports exceeds that of its crude oil imports. With the US leading an economic-pressure campaign against China, this is a cause for growing concern.

China’s problem is that, although it is the world’s leading manufacturer, it has embedded weaknesses in foundational areas, such as basic parts, materials, and advanced technologies. These weaknesses mean that the country is at least 30 years away from being a manufacturing economy of “great power.”

Progress toward self-reliance on semiconductors will be an important test of China’s ability to reach its broader goals. Its success will depend significantly on the extent to which its leaders recognize the limits of authoritarianism, top-down directives, and social control. These approaches, which are central to Xi’s governance style, worked well to contain the COVID-19 crisis. But, at a time when the digital and information economies are becoming increasingly important, a country at China’s level of development has only one way forward: transparency, openness, and institutional flexibility.