[News Focus] Should ban on short selling be lifted?

Short selling is a trading strategy in which investors are entitled to sell “borrowed” stocks at particular prices. They can reap gains by repurchasing the stocks -- which is dubbed “short covering” -- at lower prices later.

Before COVID-19 dealt a blow to the country, local and foreign institutional investors could rake in huge gains via the trading strategy. Individual traders, who are more prone to losing money, had continuously called on financial regulators to halt the sort of trading in the local capital market.

Although individuals were also allowed to engage in short selling, they were subject to stern regulatory rules compared to institutions. Even if the regulations were equal, individuals would not have been able to catch up with institutions in terms of funding power to conduct dumping of massive shares and repay them within a designated period.

But the ban has led to retail investors pondering, “Is maintaining short sales a primary requisite to attract foreign investors to Korea?” 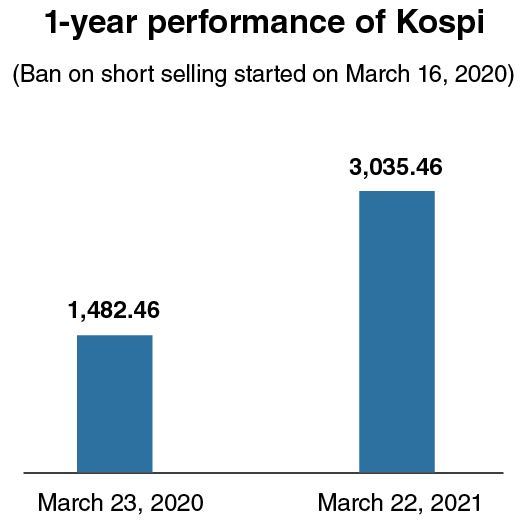 The nation’s booming stock market has stunned many in the middle of the pandemic. In January, the first-tier index surpassed the 3,000-point mark for the first time in history.

A large portion of retail investors and some research analysts share the view that the bullish stock market has been in part helped by the temporary ban on short selling in place since March 16, 2020.

But the Financial Services Commission last month decided they would start lifting the ban from May 3 on a gradual basis.

The FSC eventually rejected the growing calls from individuals for months -- or for years before the pandemic -- on banning short selling on the local capital market permanently.

Regulatory officials and some working in the brokerage industry have claimed that its abolishment would go against global standards and undermine Korea’s creditworthiness. Some of them have argued that short selling has the proper function of tackling an overheated stock market.

But it seems that these arguments have not convinced most retail investors. One online user said that “the adverse effect of short selling is that small investors frequently become the prey of local and foreign institutional short sellers. The financial authority has glossed over the situation for many years.”

“Stock prices should totally be swayed by the market principle and corporate value. Skills like short sales used to distort the market, like artificially pulling down equity prices of a company with robust fundamentals and steady earnings,” one commenter said.

Another questioned, “Will foreign investors really leave the local capital market if Korea issues a permanent ban on short selling? Korean individuals could reap gains during the ban period (since March 2020). Do foreigners have little capability to enjoy gains without short selling?”

The FSC has pledged to map out ways to allow extended opportunities of short selling for individuals, as part of efforts to provide a level playing field.

But most retail investors are seemingly skeptical about the policy. Some pointed to institutions allegedly engaging in illegal trading via “naked short selling,” which means to sell “nonexistent” stocks.

“Though naked short selling it not permitted in Korea, there have been a series of rule-perpetrators for at least several years. Most of them were subject to just regulatory cautions or fines, instead of being punished like business suspension or being handed over to criminal investigators,” one commenter said.

Earlier this year, the International Monetary Fund said they backed the Korean government’s move to resume the short sale trading.