Oh, Ahn begin talks to unify candidacy a month ahead of election

Oh and Ahn said in radio interviews Monday morning that they met Sunday night over beer and agreed that unifying the candidacy was a must, and that it should be done before official candidate registration on March 18 and 19.

They also agreed that while their respective working-level staff negotiate over what to ask in opinion polls, the two of them should work out a breakthrough when the talks are deadlocked.

Both polls released Monday were conducted in the midst of news reports on suspected property speculation by employees of state-run housing provider LH Corp. and after Prosecutor General Yoon Seok-youl‘s resignation Thursday, which are widely seen as defining moments in the run-up to the mayoral by-elections. 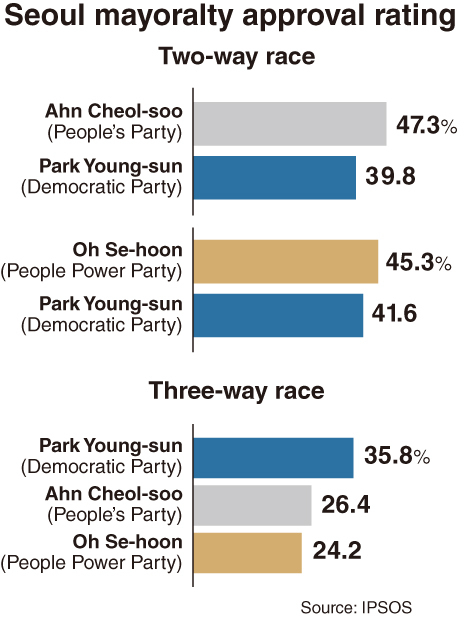 A survey of 1,004 Seoul residents aged 18 or above, conducted Friday and Saturday by pollster IPSOS and commissioned by JoongAng Ilbo, showed that a unified candidate of the opposition -- be it Oh or Ahn -- would be preferred over the Democratic Party’s Park Young-sun.

If Oh and Ahn fail to unify their candidacy and make it a three-way race, however, Park will beat them, according to the poll.

Should Ahn run as the opposition’s single candidate, 47.3 percent of respondents said they would vote for Ahn, versus 39.8 percent for Park.

If it becomes a two-way race between Oh and Park, 45.3 percent said they would support Oh, compared to 41.6 percent who favored Park.

Asked whether they think the opposition would be able to unify their candidacy, 47.1 percent of the respondents said it would not work, while 37.7 percent said it would.

As for the approval ratings for political parties, the Democratic Party led with 31.7 percent, followed by the People Power Party (25.3 percent) and the Justice Party (6 percent).

In another poll of 819 eligible voters in Seoul, conducted Friday by Next Research and commissioned by SBS, Park and Oh were neck-and-neck in a hypothetical two-way race -- 38.3 percent and 36.6 percent, respectively, within the margin of error.

It would be a close race for Park versus Ahn too, with 39.1 percent supporting the television anchor-turned-politician and 39.4 percent preferring the tech entrepreneur with a medical doctor’s license.

In a hypothetical three-way race, Park polled ahead with 30.7 percent, while the former Seoul mayor and Ahn garnered 23 percent each, according to Next Research.