Bitcoin is now worth more than its weight in gold 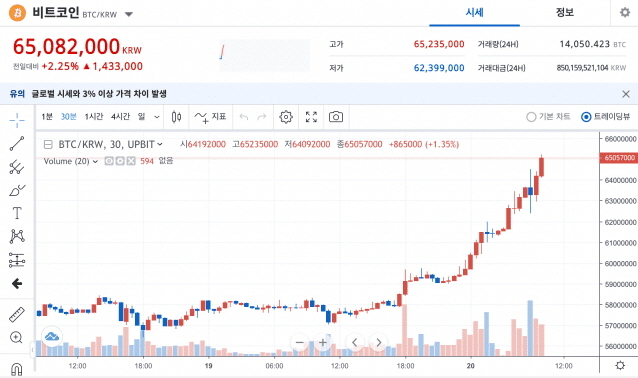 The price of Bitcoin surged to another record high over the weekend, becoming more expensive than 1 kilogram of gold.

The digital coin was being traded for more than 65 million won ($58,800) as of Sunday morning, data from crypto exchange Upbit showed. Bitcoin’s rally came as domestic gold prices recently declined to hit a new 10-month low. Gold, which has long been a safe haven asset both in Korea and worldwide, stood at 62,967 won per 1 gram as of Friday.

The largest cryptocurrency’s market value also exceeded more than $1 trillion, according to cryptocurrency data website CoinMarketCap. The figure surpasses market caps of the most valuable tech companies, such as Tesla and Facebook, whose value stood at around $750 billion. Bitcoin is quickly catching up to Google’s parent company, Alphabet, which is valued at $1.4 trillion as of Sunday.

As the value of bitcoin skyrocketed this year, seeing an increase of 100 percent, some of the digital coin’s advocates, even including Tesla CEO Elon Musk, say it might have become too expensive.

US electric vehicle maker Tesla disclosed on Feb. 8 that it had acquired $1.5 billion worth of bitcoin the month prior. This revelation only further fueled the cryptocurrency’s popularity.

Musk said that prices of bitcoin and ethereum, the second-largest cryptocurrency, “seem high” in a tweet on Saturday.

Broader acceptance from heavyweights on Wall Street also contributed to the dizzy surge of bitcoin’s price.

Last week, Mastercard said it would allow payments in the cryptocurrency this year while America’s oldest bank, the Bank of New York Mellon, set up a digital asset unit to offer bitcoin services.

BlackRock, the world’s largest asset manager, also said that they are dabbling into the crypto market.

The endorsement by big names raises the question of whether the digital currency could replace the historic “gold standard.”

In November 2020, BlackRock’s chief investment officer of fixed income Rick Rieder said during an interview with CNBC that bitcoin could take the place of gold to a large extent because it’s so much more functional than passing a bar of gold around. In another interview with the US TV network on Wednesday, Rieder said that bitcoin’s extraordinary volatility is “because people are looking for storehouses of value” on the assumption that inflation will move higher and debt will build up.