Yugyeom of GOT7 marked the opening of a new chapter under his new agency, AOMG, with a dance clip.

Uploaded at midnight Friday on the company’s YouTube and social networks, the video showed the main dancer of the seven-piece act performing to “Franchise,” a hip-hop number by Travis Scott featuring Young Thug and M.I.A.

Set against the backdrop of a grand construction site, Yugyeom demonstrated his dance skills alongside a crew.

The video confirmed earlier reports that he signed a new contract with AOMG, a hip-hop label set up by Jay Park, also formerly from JYP Entertainment. He joins artists such as Simon Dominic, Lee Hi, Loco, and Woo Wonjae.

Since GOT7’s contract with JYP Entertainment expired earlier this year, there has been speculation that the performer, who has rapped and danced for the band since 2014, would join AOMG to realize his potential as a hip-hop artist. A teaser trailer from the record label floated on the previous day -- which only showed the artist’s silhouette – further fueled speculation.

Jennie of Blackpink is the newest guest editor for Vogue Korea’s March issue, the magazine announced on Friday.

She not only posed for the camera but also took part in choosing the concept of the photoshoot and decided on the ideas for hair and makeup. In her multiple stylings and transformations, she took inspiration from a number of characters, including legendary fashion icons Kate Moss and Edie Sedgwick, as well as drama persona Daphne from the Netflix period show “Bridgerton.”

The fashionable idol’s love for Chanel was on full display as the French maison’s rings adorned her fingers in a close-up shot. In another spread, she wore a pair of denim overalls and completed the look with a pair of beige slip-ons with interlocking Cs. She is well-known for her fondness for the brand and has been a global ambassador for the fashion house since 2018.


Rain joins hands with Chungha for next collab

Rain is returning with an EP titled “Pieces by Rain” on March 3 and has collaborated with Chungha for his title track “Why Don’t We.” In a teaser photo that came with the announcement, the charismatic pair is captured in mid-dance.

The musician also recalled how he went to Chungha’s studio bearing a recording of the song and suggested working on it together on his own YouTube channel.

Chungha confessed that she was “extremely nervous” about the idea. She recently topped a television music chart program for the first time with “Bicycle,” the lead track from her first studio album “Querencia.”

“Pieces by Rain” will be his first album since “My Life愛” which was released in December 2017. 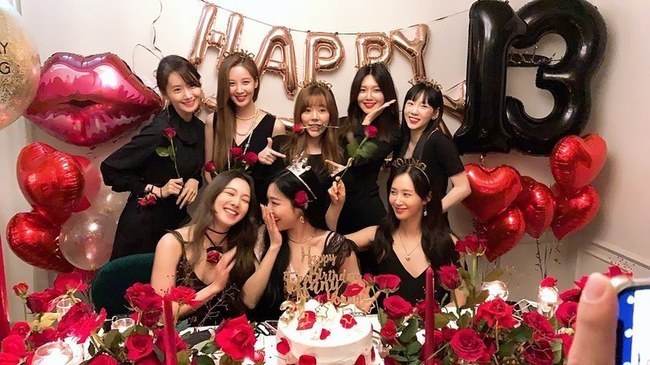 Girls’ Generation may rejoin forces in a comeback, local media outlets reported on Friday, although the group’s agency SM Entertainment has stated that nothing has been confirmed yet.

Despite individual members belonging to different companies, they have remained close and have been discussing making music together again, some reports said, quoting multiple sources close to the members.

They have been adjusting their schedules and are looking at a potential comeback for May or June, and are likely to appear on television music shows, one source said.

The group celebrated their 13th anniversary of their debut last year, with Taeyeon at that time having said that “Girls’ Generation will never come to an end ever.”

The band debuted in 2007 and their last act together was “Holiday Night,” their sixth full-length album that came out in August 2017. The five members remaining at SM Entertainment -- Taeyeon, Sunny, Hyoyeon, Yuri and Yoonah -- put out a singles album under a unit called Girls’ Generation - Oh!GG in 2018.