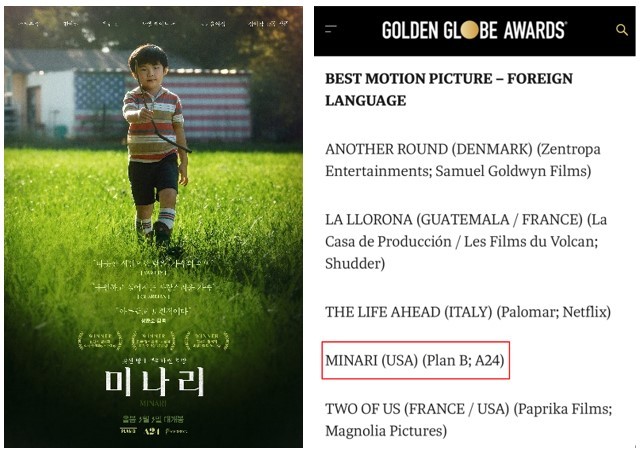 “Minari,” directed by Korean American Lee Isaac Chung, depicts the story of a family of four first-generation immigrants from South Korea. In the movie, Jacob (Steven Yeun) and Monica (Han Ye-ri) move to rural Arkansas with their two kids to pursue their own version of the American dream.

Chung’s film will compete with four other films for the title of best motion picture in a foreign language. Its competitors are “Another Round” from Denmark, “La Llorona” from Guatemala, “The Life Ahead” from Italy and “Two of Us” from the United States.

“Minari” premiered at the Sundance Film Festival in January last year, where it won jury and audience prizes. So far, the film and its cast have bagged 59 awards at US film festivals and in film critics’ circles, including the Middleburg Film Festival and the Denver Film Festival.

Veteran actor Youn Yuh-jung, who won her 20th best supporting actress trophy in the US last month for her performance in “Minari,” failed to get a nod at this year’s Golden Globes. Youn played the Korean grandmother who joins the family in rural Arkansas to babysit her two grandchildren.

Meanwhile, the news that “Minari” was nominated in the foreign-language category reignited criticism in the US over the Golden Globes’ rules.

“It wouldn’t be the Globes without a foreign-language film kerfuffle,” the New York Times reported Wednesday. “This time, the group has egg on its face because Lee Isaac Chung’s ‘Minari’ has to compete as a foreign-language nominee -- even though Mr. Chung is an American director, the movie was filmed in the United States, it was financed by American companies and it focuses on an immigrant family pursuing the American dream.”

Similar criticism arose in December when reports came out that “Minari” had to compete for nomination in the foreign-language film category due to Hollywood Foreign Press Association rules.

Those rules state that at least 50 percent of the dialogue in a film must be in English for it to compete in any other category. Foreign-language films are not eligible for the top prize.

“I have not seen a more American film than #Minari this year. It’s a story about an immigrant family, IN America, pursuing the American dream. We really need to change these antiquated rules that characterize American as only English-speaking,” Chinese American director Lulu Wang wrote on her social media account at the time.

Wang’s film “The Farewell” received similar treatment from the association, deemed ineligible for best musical/comedy at the Golden Globes because it was mostly in Chinese.