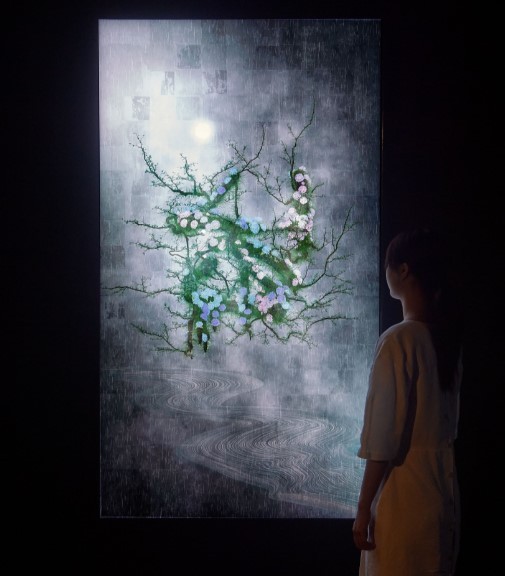 "Life Survives by the Power of Life” by teamLab (CultureDepot)

In a dark room, animals bloom from digitally projected flowers on a wall. When touched, the flowers scatter and disappear -- just as it would in nature when humans seek to manipulate it.

The artwork -- “Animals of Flower, Symbiotic Lives II” -- was one of several at the exhibition “teamLab: LIFE” at Dongdaemun Design Plaza in Seoul that went viral after it opened last September, attracting a large number of visitors despite the ongoing pandemic.

Designed by teamLab, an art collective, the artworks are not pre-recorded images on continuous playback. The works are created by a computer program that recognizes viewers in real time. In other words, the art pieces change constantly depending on how the viewers choose to interact with the installed works.

Founded in 2001 by Japanese Director Toshiyuki Inoko, the interdisciplinary collective art group consists of hundreds of specialists around the world ranging from engineers, artists, programmers and animators to experts in architectural geometry. The group’s works merge the medium of light with art, creating its own uniqueness.

“The artworks constantly change depending on time, seasons, and when people touch them,” said Hwang Hee-jung, general manager of CultureDepot, the exhibition organizer. Represented by Pace Gallery, teamLab’s works are in the permanent collections of the Asian Art Museum in San Francisco, the Asia Society Museum in New York, the National Gallery of Victoria in Melbourne and the Amos Rex in Helsinki.

Digital media exhibitions such as “teamLab: LIFE,” with their surging popularity fueled by social media users, are breaking the perception that art and technology are separate entities, and by combining them together, they can imitate virtual, “natural” environments. 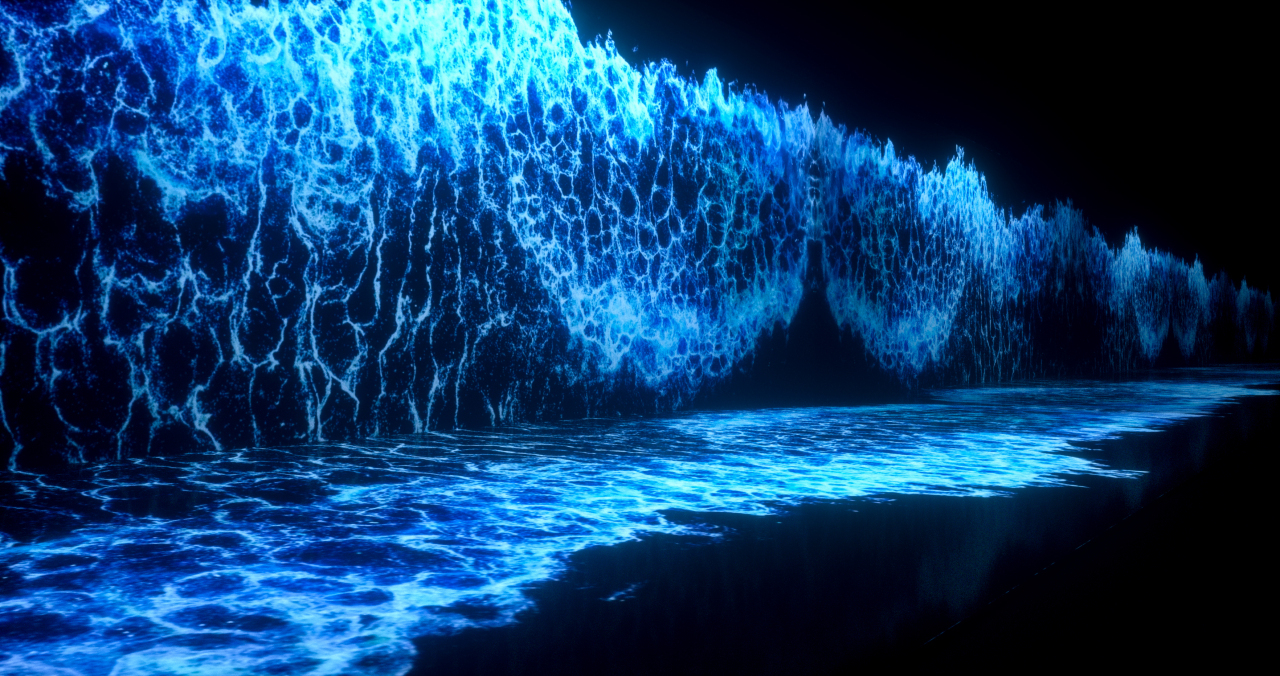 "Starry Beach" by a'strict (Kukje Gallery)
Another digital installation titled “Wave” by D’strict -- a Seoul-based commercial design company -- grabbed global attention when it was showcased at Coex K-pop Square in Seoul in May. The public artwork features a massive wave crashing into the sides of what looks like a giant glass tank that was a wrap-around LED display.

Three months later, D’strict launched a media artist unit, “a’strict,” whose first exhibition took place at Kukje Gallery in Seoul. Its installation work “Starry Beach” -- a three-minute high-definition video work of waves repeatedly rushing up and down a 6-meter-high wall accompanied by the sound of crashing waves -- was a huge hit. It attracted 17,016 visitors, a record number for a single exhibition, according to the gallery.

"We think technology can be an excellent tool in expanding the mode of expression in art. For instance, the invention of photography led to the fading out of modern art that focused on visual reproduction, and made way for contemporary art which requires artists’ ideas. I think media technology is a new tool that, like the invention of photography, allows different artistic expressions,” D’strict Chief Executive Office Lee Sung-ho told The Korea Herald in an interview last year. 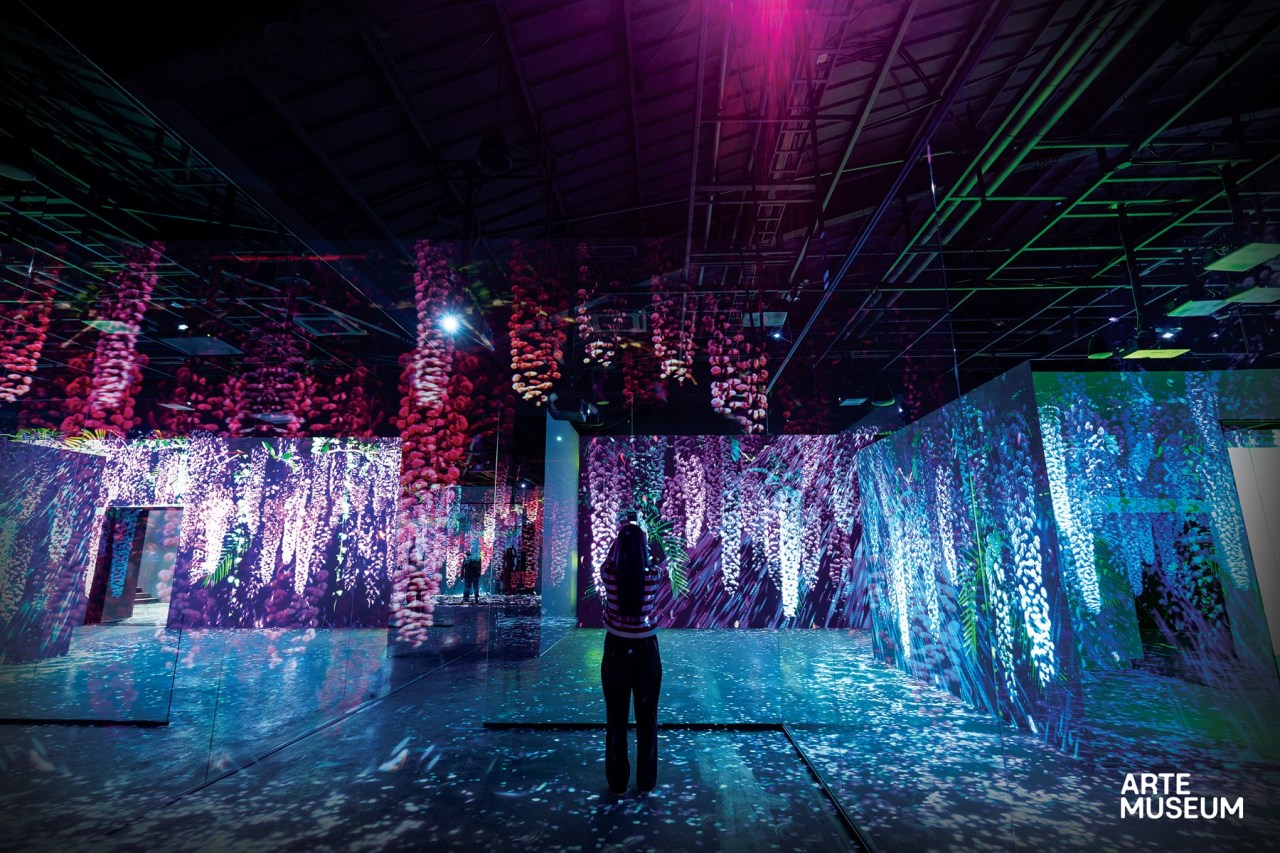 “The culture of appreciating art seems to have changed to expressing oneself rather than simply appreciating artworks as a passive viewer. The fact that they have experienced the works and leave the evidences that they experienced the works and post them on social media have become important,” said Sung Jung-hwan, a professor at Soongsil University’s Global School of Media.

“Only a few years ago, such digital media works were likely to be shunned in the art scene, but things have changed a lot with more museums and exhibitions organizers welcoming such exhibitions,” he added.

"Audiences seem to like putting themselves into the spaces of artworks and enjoy the atmosphere,” said Jung Go-eun, art director of the cultural marketing team at Lotte Department Store, who curated the exhibition “UNIVERSE -- WHANKI 1 - Ⅰ- 21” which opened this month at Lotte World Tower. The exhibition includes an outdoor installation, a 6-meter-tall media cube that plays a digitally recreated artwork of Kim Whan-ki’s masterpiece, “05-IV-71 #200 (Universe).”

As more artworks and exhibitions incorporate technology, new issues such as copyright, are emerging, according to Jung. While many works are original creations or reproduced artworks created with permission, there is a grey area. When Kim Whan-ki’s work was recreated in a digital form, it was on the condition that the name of the original art be used.

“As technology develops and expands to the arts, who is the artist of the work becomes problematic. In Korea, we still tend to see those who produce digital works as technicians or manufacturers than as artists,” Jung said.