[Serendipity] An ode to office 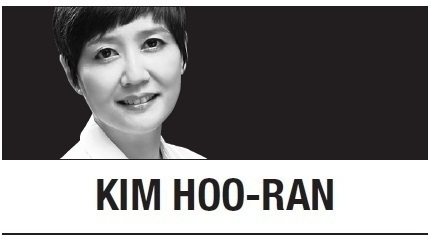 There was a spring in my step as I walked up the stairs to the office after the longest stretch away since the outbreak of the COVID-19 pandemic. Hollering “Best health for the new year!” to security personnel at the entrance lobby nearly two weeks into the year felt great. Since late December, most of the staff members of The Korea Herald have been working from home.

On Wednesday, I was back at the office for a meeting. The sight of piles of old newspapers and unopened envelopes strewn about on the desk was a reminder of just how long it had been.

Then my old routine kicked in: Turn on the computer, grab coffee from downstairs and check email. It was as if I had never left.

Exchanging long-overdue New Year’s greetings with the few colleagues at the office, I realized how much I missed human contact. The last four weeks of working from home involved endless streams of texts and it now felt awkward to engage in actual, face-to-face conversations.

Oh, I did host a Zoom meeting, but that is not my preferred modus operandi. I taught graduate courses via Zoom last year and found it draining. I blame it partly on the extra focus required to stare at the computer’s webcam the whole time. But I think it has more to do with the lack of real interaction, spontaneity and the absence of physical presence. If in-person meetings allow for an exchange of energy, or ki or qi or whatever you wish to call it, there is none of that in a virtual meeting. Hence the feeling of being sapped of energy.

Stuck in the evening rush hour traffic, I did not mind it too much. I felt relieved at the sense of normalcy. “This is how the day ends, how it is supposed to end,” I thought to myself. For once, I could forgive the people who cut in front of me.

But what I think is the norm is no longer so and will likely never again be. Since the early months of the global crisis, management experts, productivity experts and human resources experts have been arguing that remote work is now normal, that not everyone is going to go back to the office even when the pandemic is over.

Some call it a once-in-a generation opportunity to change the way we work. The pandemic has been called the great accelerator and many pundits opine that in the case of work life, it has accelerated changes that were already on their way.

Having been forced to change how we work almost overnight as the pandemic disrupted all aspects of our lives, we now see that the changes that we had resisted for one reason or another can lead to improvements in the way we do things. In some instances, we rather like the changes.

Take working from home, for example. According to a McKinsey report, 62 percent of employed Americans worked at home in April, compared to 25 percent a couple of years ago. The stigma traditionally associated with working from home was removed and companies, utilizing the already available digital technologies that make remote working efficient, were surprised by the results.

A Gartner Survey in the first quarter of 2020 also shows higher productivity among employees working remotely. The survey of more than 5,000 employees found that 48 percent of employees working fully remote showed high discretionary effort, or effort beyond the minimum required, compared to 35 percent for employees who never work remotely.

There are other pluses for companies. With remote working, companies will no longer be limited by location in hiring, increasing the possibility of hiring the best talent. Reduced work space requirements will translate to lower real estate costs, which is a significant advantage for companies with large headquarters in big cities.

It seems there is little reason to resist remote work as the primary form of working life.

However, this great experiment has gone on for only a year. Some experts say the social capital built over the years has allowed organizations to ride the tide of change without too many hiccups. Once that capital is depleted, they warn, companies may find it difficult to preserve corporate culture, pursue collaboration among workers and maintain productivity.

Nearly four weeks into working remotely, I miss the act of showing up to work and a workspace that is separate from the rest of my life. Most of all, I miss the casual conversations with colleagues in the hallway and at the coffee machine that have spawned new ideas and new projects. Those serendipitous moments just cannot be booked in advance for a Zoom meeting.

Kim Hoo-ran is the culture desk editor at The Korea Herald. – Ed.