[Shuli Ren] Why China Is sentencing a tycoon to death 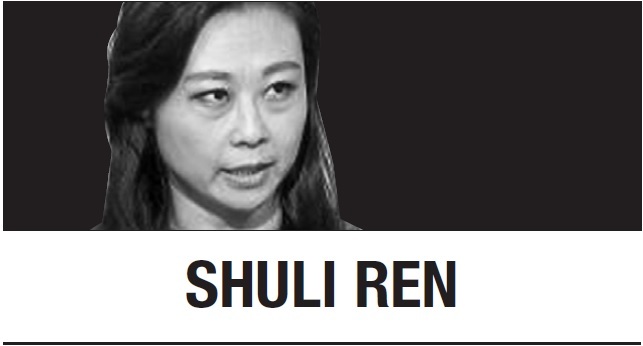 The bigamy conviction got a lot of the attention but Lai Xiaomin received a death sentence on Tuesday over a much more serious issue troubling China.

Lai oversaw China Huarong Asset Management from 2012 until he ran into trouble in 2018. He was found guilty of receiving 1.79 billion yuan ($277.3 million) in bribes, with bigamy thrown in for good measure. Still, capital punishment for this kind of white-collar crime is unusual, legal experts say. Wu Xiaohui, former chairman of Anbang Insurance Group, whose clean-up is costing Beijing billions of dollars, was sentenced to 18 years in jail over a $10 billion fraud in 2018.

So what is Beijing trying to signal? Who’s the intended audience of this harsh sentence? Other rich and privileged people? Should Alibaba Group Holding’s founder Jack Ma be worried? Though he hasn’t been charged with any crime, he has disappeared from the public eye since the suspension of his $35 billion Ant Group initial public offering in November.

At first glance, it may be meant as a reminder to naughty business tycoons of Beijing’s lethal legal arsenal. But the punitive measure against Lai is more likely part of the Communist Party’s internal housekeeping. With Donald Trump and the COVID-19-related economic slowdown out of the way, President Xi Jinping is going back to his war on shadow banking, which he started in earnest in late 2017. Beijing wants to set an example for bureaucrats, to show what can happen to those who do not heed their corporate deleveraging mandate.

Unlike Anbang, Huarong is a proper state-owned enterprise. Backed by the Ministry of Finance, Huarong was established to clean up the bad debts on the books of commercial banks. As such, the distressed debt manager enjoyed many privileges, including quasi-sovereign creditworthiness and a wide array of financial licenses that the private sector covets and can’t get hold of.

But instead of dealing with the bad debt, Lai went rogue, dabbling in everything from private equity to junk bond trading. At the end of 2016, distressed loans accounted for only 25 percent of Huarong’s total assets, down from 34 percent two years earlier. Instead, other financial products rose as a percentage of assets, including bonds, which could be easily turned around for profit.

In mainland China, Huarong established hundreds of joint venture companies, with the sole purpose of purchasing real estate, reported Caixin, an online and print business journal. In Hong Kong, Lai’s company raised large amounts from dollar bond issues, in turn using the proceeds to buy junk-rated notes. Energy trader CEFC Shanghai International Group, one of its investments, has since gone bust. As part of that game, Huarong built a labyrinth of shell companies, which activist David Webb has told investors not to own.

If Lai were a mere day trader, he might not be facing such serious consequences. However, his shadow lending resulted in huge losses that ultimately go on Beijing’s own books. For instance, without proper protocols, Huarong provided a large amount of structured financing to Ningxia Tianyuan Manganese Industry, which enabled the latter’s rapid debt-fueled global expansion.

You can just hear Beijing’s ire in Lai’s sentence. He leapfrogged the reporting lines and interfered in ground-level investment projects in order to seek improper benefits for certain individuals, declared the Tianjin court that sentenced him to death. “He endangered (China’s) financial stability.“

In this sense, Beijing’s bigamy accusation is, ironically, a perfect analogy. Lai was provided with tons of “dowry” for the sole purpose of lessening banks’ bad debt load. Instead, he branched out, built other nests and sired offspring that Beijing did not want. Instead of solving a problem, Lai became a problem.

Granted, Anbang’s Wu was a troublemaker too, using proceeds collected from short-term insurance products to buy long-term assets such as New York’s famed Waldorf Astoria hotel. But he is a private citizen who exploited his association with Deng Xiaoping’s family to open doors and perpetuate fraud. Officials like Lai, on the other hand, come with great power handed to them by the state -- with plenty of room to abuse that power.

In China’s sprawling state-owned financial sector, bureaucrats sometimes forget to act responsibly, giving out loans to family and friends without proper risk management. So how does Beijing ensure its bureaucrats behave? Desperate times call for desperate measures. With total debt edging to 300 percent of gross domestic product, China is one of the world’s most indebted nations. One death sentence may be just enough of a deterrent.