Experimenting with new materials and unconventional approaches, Lee came up with ‘nonsculpture’

By Park Yuna
Published : Nov 25, 2020 - 16:17       Updated : Nov 25, 2020 - 16:17
Lee Seung-taek is a representative figure in the Korean experimental art scene who has challenged himself to make new attempts in his works since the 1950s, when the country was going through the turmoil of the Korean War and times of rapid industrialization. At a time when many artists tended to follow art trends popular in the West or Japan, some struggled to find characteristics of their own, delving into the Korean culture that was overlooked during the Japanese colonial era, with a belief in their own uniqueness in art coming from tradition.

Lee was one such artist, but he also had something else. What differentiated the artist from other artists of the time was that he experimented with a variety of subject matters, including traditional Korean materials, and introduced conceptual art to the Korean arts scene.

His first large-scale retrospective, “Lee Seung Taek’s Non-Art: The Inversive Act” was unveiled Wednesday at the National Museum of Modern and Contemporary Art, Korea in Seoul, encompassing his 60-year career through approximately 250 works of installations, sculptures and paintings. 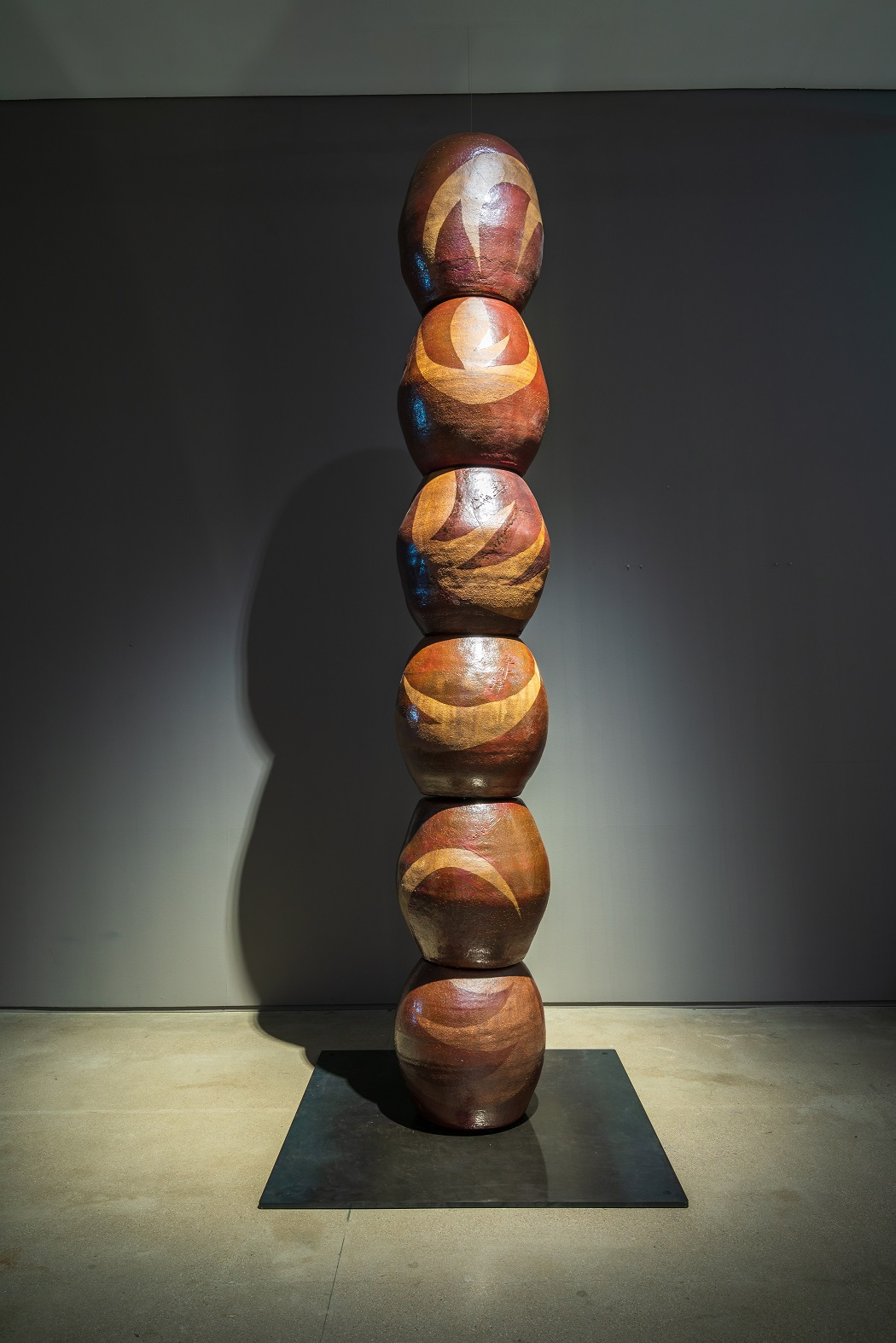 "Growth (Tower)” by Lee Seung-taek (MMCA)
"I saw the world upside down, and my thought process was inverted. I lived inversely. As an artist, you have to study a lot,” Lee said at a press conference Tuesday at the MMCA. “My works are one of a kind, you may not be able to see something like these.”

The 87-year-old artist challenged the concept of sculpture, experimenting with new materials and unconventional approaches to installations -- from a traditional earthenware storage container, or “onggi,” to industrial materials such as plastic items, coal briquettes, steel, lumber and cement. Materials not perceived as sculptural materials at the time became Lee’s subject matter. The concept of his experiments in materials for sculptural works was dubbed “nonsculpture.”

Lee also tied objects using strings and twine. Objects such as stones, ceramic jars and books appear malleable with the inscription of imaginary rope-tying marks on them. The language of tying bears some connection to the ethnological experience of tying things with “godret stones” and straw rope, but it also implies the artist’s own paradox to stir up different aspects of the materials.

In the 1960s, Lee began to work on “formless works,” incorporating natural phenomena such as wind, fire and smoke into his art. His outdoor installation “Wind,” which shows a row of blue fabrics suspended from a single cord connected between buildings outside the museum, is a replica of the 1970 work installed at Hongik University, from which the artist graduated.


The wind series was produced with variations until the 2000s with the intention to visualize the invisible using Korean mulberry paper, or “hanji,” twine and rags. His other formless works are shown at the exhibition through video documentaries, which include his immolation performances in 1989 at Total Gallery in Seoul and Nanjido -- at the time, a small island on a branch of the Han River -- by burning his own paintings, sculptures and installation works to challenge everything christened “art.”

Born in 1932 in Gowon, South Hamgyong Province, in today‘s North Korea, Lee moved to South Korea in 1950 when the Korean War broke out. He was awarded the Nam June Paik Art Center Prize in 2009.

The exhibition runs through March 28. The museum will admit up to 30 percent of its capacity amid the Level 2 distancing rules that came into effect Tuesday.