[Andreas Kluth] Populist politics in Poland serves as warning to US 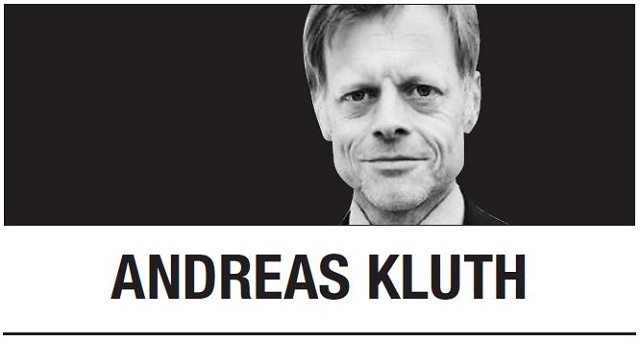 In 2015, the year before Donald Trump became president of the US, a similar power shift occurred in Eastern Europe, albeit on a smaller scale. Like America soon after, Poland veered hard-right toward an anti-elitist populism built on the politics of grievance and resentment. What’s Poland like today?

Bitterly divided. “This is war,” read some of the banners carried by hundreds of thousands of Poles, mainly women, who took to the streets in recent days. They’re marching against a push to make one of Europe’s most restrictive abortion laws even more prohibitive, with a ban on terminating pregnancies even when the fetus is not viable. “I wish I could abort my government,” said the sign of one woman.

These passions in turn fit neatly into the playbook of Jaroslaw Kaczynski, the eminence grise of Polish politics as leader of the populist ruling party, called Law & Justice. The women on the streets are “nihilists” bent on “destroying Poland,” he proclaimed. State television, which the party has in its grip, called the protesters “left-wing fascists.” Kaczynski encouraged God-fearing Poles to “defend” churches and shrines from the allegedly rampant mobs. Many turned out, some of them carrying neo-Nazi symbols.

And so it goes, on the streets of Poland in this fall of 2020. But things didn’t deteriorate to this point all at once. The slide into bitterness -- which may look familiar to Americans -- happened gradually over the past five years.

Physically and stylistically, Kaczynski bears no resemblance to a flamboyant reality TV star like Trump. He’s a diminutive man who prefers to stay out of the limelight and rule from behind the scenes. He formally joined the Cabinet as deputy prime minister only recently, to keep tabs on a power struggle between the prime minister and justice minister.

But in his political instincts Kaczynski has much in common with Trump. Both appeal to, and govern for, their base. In Kaczynski’s case, that’s rural and conservative Catholics who are disillusioned with Poland’s development since the fall of communism. Like Trump, Kaczynski rails against refugees and other migrants, whom he sees as threatening the way of life of authentic Poles, by which he means the party faithful.

Above all, Kaczynski and his party revel in their disdain for liberal and cosmopolitan “elites.” During this year’s presidential campaign, this took the form of vilifying gays, lesbians and transgender people and their alleged “LGBT ideology.” The party has also recycled anti-Semitic stereotypes in the past and flirted with conspiracy theories.

Like Trump, Kaczynski and his minions have also wantonly been breaking democratic taboos. But in Poland, which became a democracy only in 1989 and a member of the European Union in 2004, that’s easier than in the US, with its long tradition of checks and balances. Most notably, Law & Justice has, with many complicated maneuvers, sabotaged the rule of law, and specifically the independence of judges and courts.

As a result, the EU is now in the midst of a formal infringement investigation against Poland. But that’s only egged on Kaczynski more. Poland is the biggest net beneficiary of funds from Brussels. But rather as Trump loves to cast aspersions on the United Nations, the World Health Organization or any other multilateral body -- Law & Justice portrays the EU as a perfidious empire interfering in Polish nation building.

The overall effect of Polish populism has been to make the country a pariah within the EU. It appears uninterested in helping to solve any major problem, from migration to climate change and now the pandemic. The EU’s big pandemic stimulus package is stuck over a clause aimed precisely at Poland and Hungary to tie funding to the rule of law. Meanwhile the coronavirus, which arrived late in Poland, is spreading fast.

The move to ban abortion, which the government is now tactically delaying, is widely considered an attempt to distract from all these problems and failures, and to rally the conservative Catholic base once again for the wider culture war ahead. That’s populism in a nutshell.

But its limits are now becoming clear. In a poll conducted on Oct. 31, nine days after the ruling on abortion, only 30.9 percent supported Law & Justice, a steep drop. According to another survey, about 70 percent had a negative view of Kaczynski and said he should step down as head of the party.

It’s far too early to conclude either that populism in Poland has peaked or that it will progress toward autocracy as in Hungary. But Poland already serves as a warning to the US, in case any more were needed. The populist politics of resentment lead a country into a dead end. Once citizens regard their compatriots as enemies, once those in power distinguish between in-groups and out-groups, no problems can be solved at all and many new ones are created. And the whole country suffers.