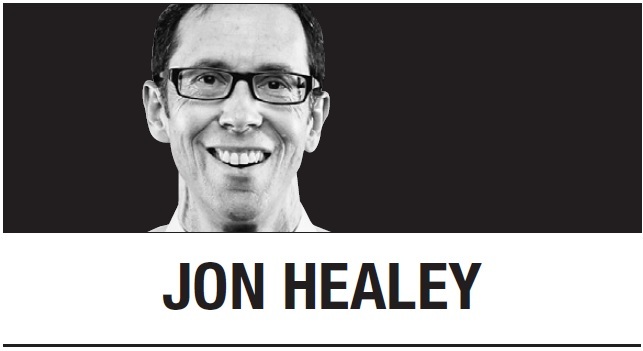 President Donald Trump seems perpetually confused about who pays the tariffs of 10 percent to 25 percent that he’s imposed on imported goods. Either that, or he just won’t admit the truth: Trump’s tariffs are taxes on US purchasers, not foreign manufacturers.

The issue came up again at the Oct. 22 presidential debate in Nashville, Tennessee, after moderator Kristen Welker of NBC News teed up a question for the two candidates about China policy.

Welker started with former Vice President Joe Biden, asking this: “Let’s talk about China more broadly. ... President Trump has said that they should pay for not being fully transparent in regards to the coronavirus. If you were president, would you make China pay? And please be specific, what would that look like?”

Biden responded by laying out his multilateral approach toward China trade. After accusing Trump of cozying up to Chinese President Xi Jingping and other foreign “thugs” while “pok(ing) his finger in the eye of all our friends, all our allies,” Biden said, “We’re 25 percent, 25 percent of the world’s economy. We need to be having the rest of our friends with us saying to China, ‘These are the rules. You play by them, or you’re going to pay the price for not playing by them economically.’”

Trump has frequently argued that Biden’s approach hasn’t worked, and he has a point -- China has flouted the World Trade Organization’s rules seemingly since the day it was admitted to the WTO in late 2001, regardless of US efforts to constrain it.

But Trump didn’t go there Thursday. Instead, he pivoted to Hunter Biden’s work on the board of a Shanghai-based private equity firm, tossing out as-yet unproven and probably exaggerated assertions about the money the younger Biden raised when he traveled to China with his father in 2013. It was one of many such shots fired by Trump, whose volleys against Biden’s character and policies grew wilder and more frequent as the night went on.

To which Trump said, “First of all, China is paying. They’re paying billions and billions of dollars.”

That just isn’t true, mechanically speaking. The tariffs that Trump imposed on more than $350 billion worth of goods made in China are collected here in the United States from US importers, who may then pass on the costs to consumers in the form of higher prices. The right-leaning Tax Foundation found that collectively, Trump’s new tariffs on Chinese goods, global steel imports and other foreign products rank as the 17th-largest tax increase on Americans since 1940.

The net effect of tariffs is a little harder to calculate because, over the long run, currency exchange rates tend to adjust to mitigate the cost of the tariffs. So one might expect China’s currency to lose value relative to the US dollar, making Chinese imports cheaper and offsetting the cost of the tariffs. At the moment, though, the value of China’s yuan is roughly the same as it was relative to the US dollar as it was when the trade war started in July 2018, having bounced up and down over the intervening months.

There are other factors at work here too, including retaliatory tariffs and exclusions that China has slapped on US goods. The bottom line, researchers say, is that US buyers were bearing essentially the full brunt of the tariffs’ cost.

Research also found that importers weren’t passing on most of those costs to consumers, instead taking the hit to their bottom lines. The cost to consumers, studies suggest, could be only a few hundred dollars per year. So, umm, yay?

Trump went on to say, “China pays $28 billion, and you know what they did to pay it, Joe? They devalued their currency and they also paid up, and you know who got the money? Our farmers, our great farmers, because they were targeted.”

Biden’s response was that the money came from US taxpayers, which is kinda right but not quite. It came almost entirely from US importers, the ones who have to fork over the tariffs.