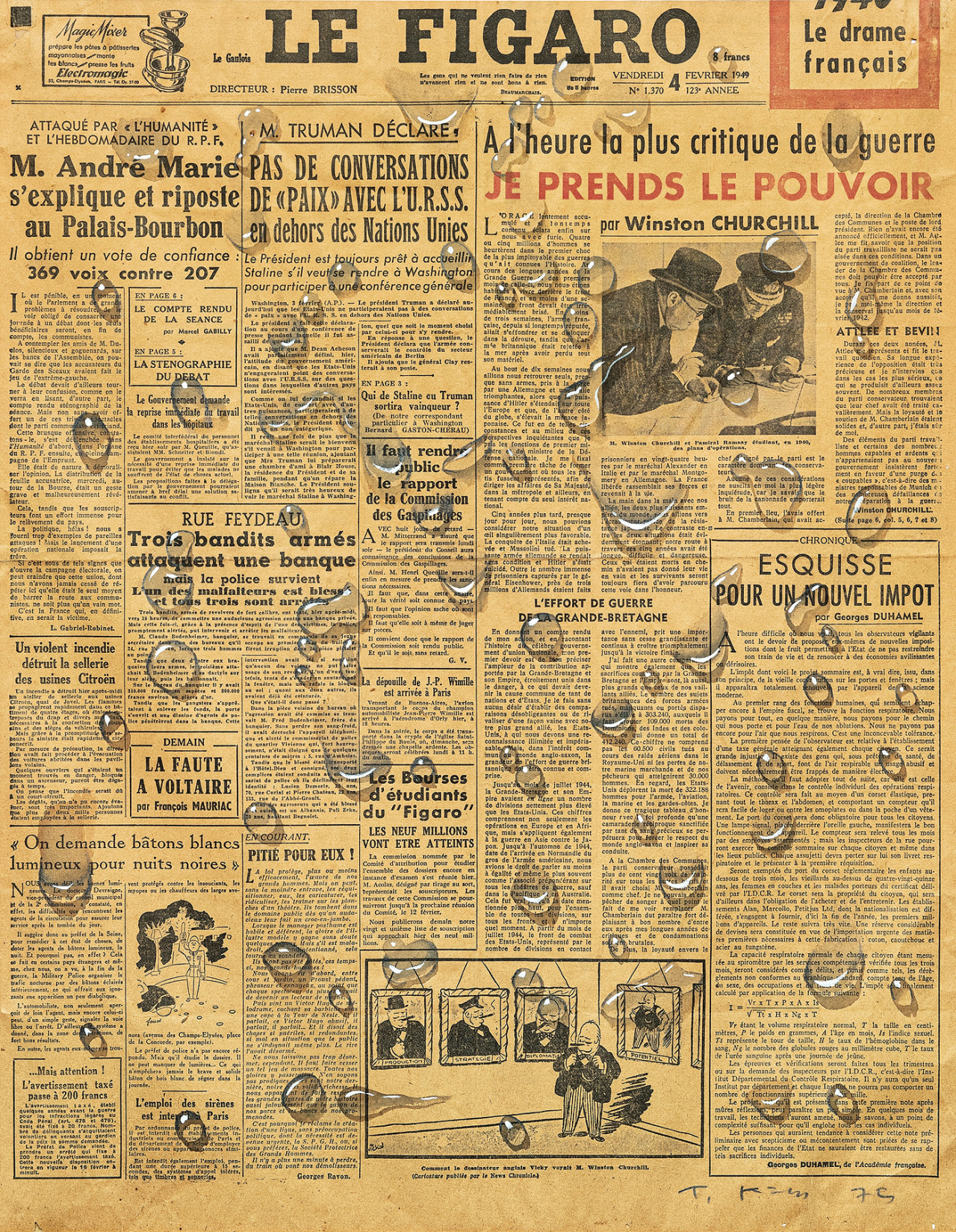 Gallery Hyundai, a major commercial art gallery in Korea that has a special relationship with the 90-year-old artist, sheds light on that history through an exhibition dedicated to the artist.

“The Path” is an exhibition that shows how Kim highlights his personality through the painting series that combines text and water drops, including the renowned “Recurrence” series that began in the mid-1980s.

The exhibition begins with the work “Le Figaro” in 1975, featuring water drops the artist painted on the French daily newspaper as his first trial to associate water drops with text. The artist was fascinated with the French newspaper’s aesthetic design at the time.


Kim first unveiled the water drop paintings at his first solo exhibition in 1973 at the Knoll International in Paris. Among the visitors was Salvador Dali, according to the Korea Arts Management Service’s archive.

A few years after the exhibition in Paris, Kim unveiled his water drop paintings in Korea for the first time at Gallery Hyundai in May 1976. Kim has held more than 80 solo exhibitions across France, Korea, Japan, Germany and the US. The exhibition, “The Path,” is the artist’s 14th solo show at the gallery in seven years.

Kim’s paintings of water drops and text are categorized into three parts at the exhibition: Encounter, Realization and Recurrence, and Reflection and Expansion.

The repeated calligraphy strokes of the Thousand-Character Classic permeated into hanji as the background of the water drops are the residues left from the process of spiritual training by repeating the same action -- painting the strokes to empty oneself.

Kim is known to have been greatly influenced by the Thousand-Character Classic, the Chinese thousand-character text that he learned from his grandfather when he was a child.

“Chinese characters resound infinitely and unfold without end. Because they are the texts I first learned as a child, Thousand-Character Classic has always held a place in my heart and is able to support my water drops as their companion,” the artist’s quote is on display at the exhibition hall.

Kim is Korea’s leading contemporary artist who pioneered Art Informel --the art movement that prevailed in Europe after the second World War -- in Korea after the end of the Korean War in 1953. He has created his own unique artistic universe, painting the iconic water droplets that deliver his philosophy.

The exhibition, which runs through Nov. 29, has been planned since last year, commemorating the 50th anniversary of Gallery Hyundai in central Seoul. An online reservation is required before visiting the exhibition via the gallery’s official website at galleryhyundai.com.