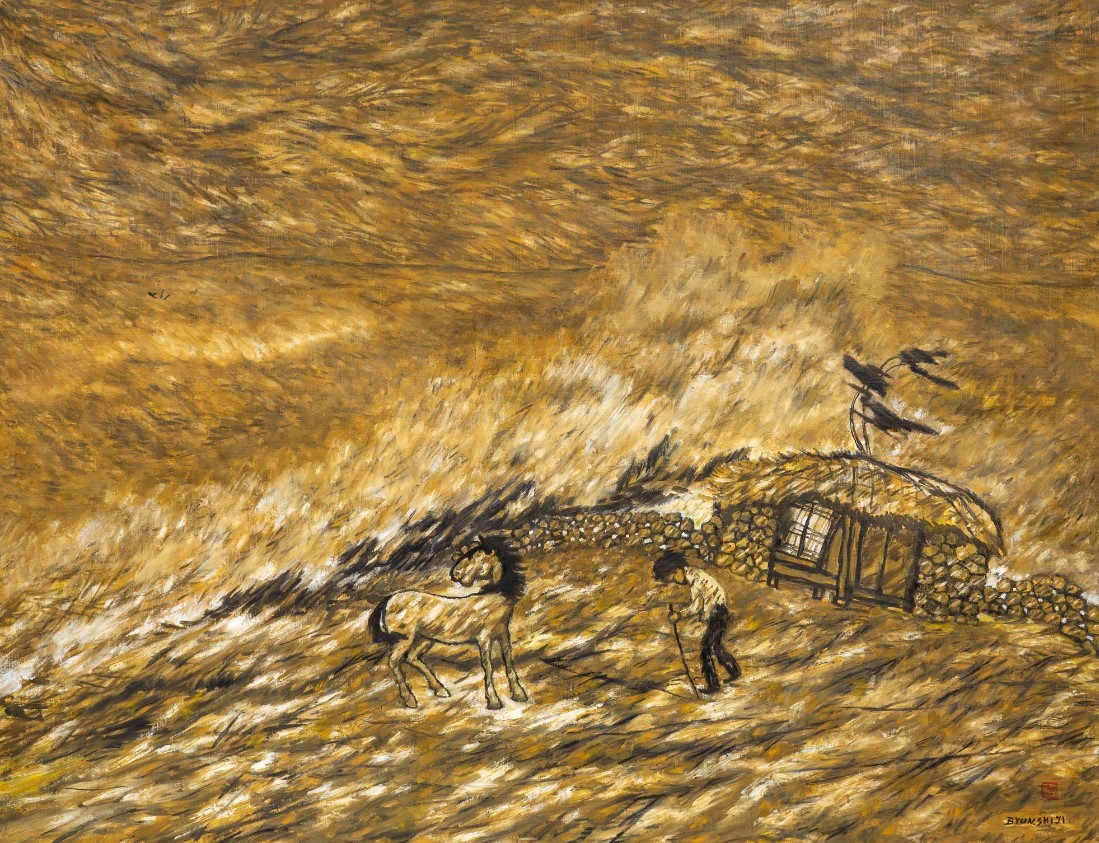 "Sea of the Storm” by Byun Shi-ji (Gana Art)

You may feel poignant loneliness in the paintings. The man who walks with a cane facing strong wind or a typhoon may look so lonely that it brings tears to your eyes. But at the same time, you will feel solace.

What made his life so arduous? The question will linger in your mind as you view the works of Korean modern artist Byun Shi-ji at the Gana Art Center exhibition that features 40 paintings from his final years on Jeju Island, where he died in 2013.

Born in 1926 on Jeju Island, the artist moved to Japan with his family during the Japanese colonial era when he was 6 years old. He injured his leg during a wrestling match and for the rest of his life required the assistance of a cane. The man who withstands the storm with a horse in Byun’s paintings reminds one of the artist who persevered in the face of overwhelming obstacles. 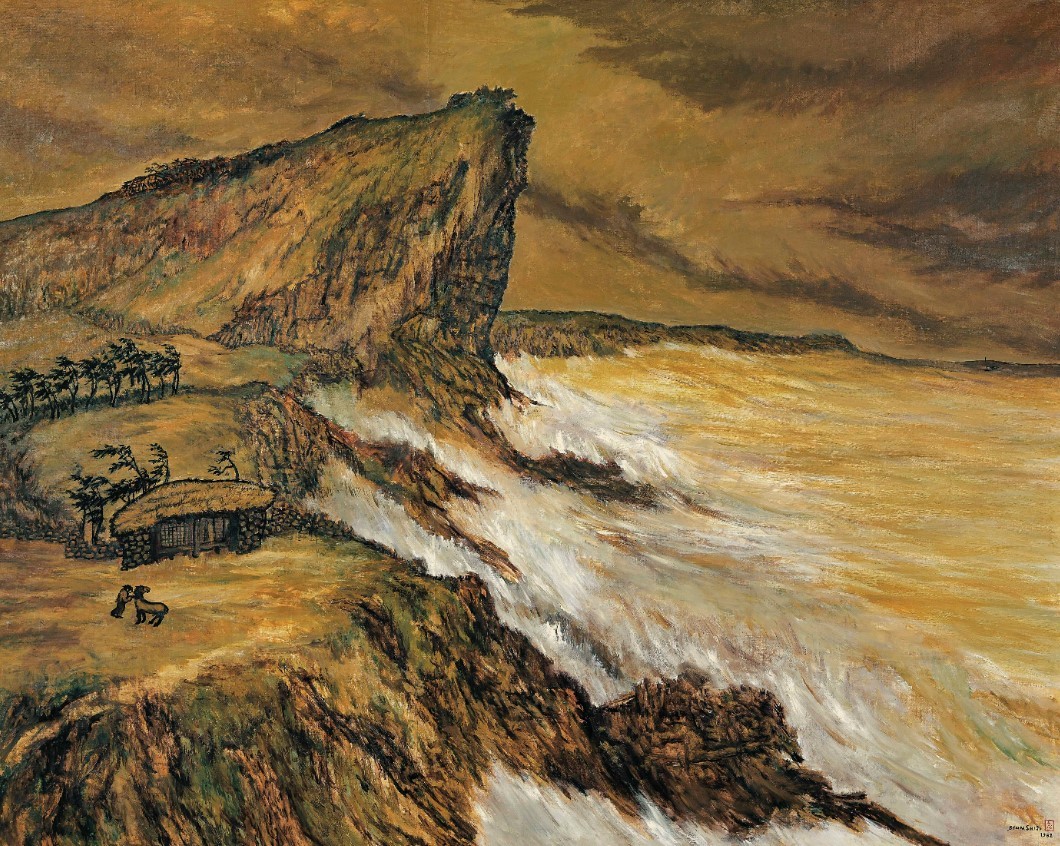 "Typhoon” by Byun Shi-ji (Gidang Art Museum)
After graduating from the Western Painting Department of Osaka Art School in 1945, he enjoyed great success there, winning the highest award at a competition organized by Kofukai, a major arts group in Japan, in 1948. He was the youngest winner of the prestigious award.

At the age of 32 and upon invitation from Seoul National University, Byun returned to Korea. The move was strongly opposed by his family.

“As I grew older I came to face a new necessity to fully know my own country, I belong to Korea, and it is in my country that I can develop something on my own,” Byun said at the time.

Upon returning to Korea, the artist held a solo exhibition at the Hwashin Department Store gallery in Seoul in 1958, attracting nearly 6,000 visitors daily, according to an article from the Korean Republic, an English-language daily, at the time. People flocked to see the works of the Korean artist who had a great success in Japan.

However, the exhibition backfired after some art critics raised suspicions about Byung’s ideology over a number of paintings at the exhibition that depicted the lives of ordinary laborers. It was a time when political ideology was a highly volatile issue, following the 1950-53 Korean War.

Byun returned to his hometown on Jeju Island in 1975 at the age of 48, and lived there until he died of pancreatic cancer in 2013. On Jeju, Byun’s painting style began to change dramatically, pursuing the locality of his hometown in yellowish hues. 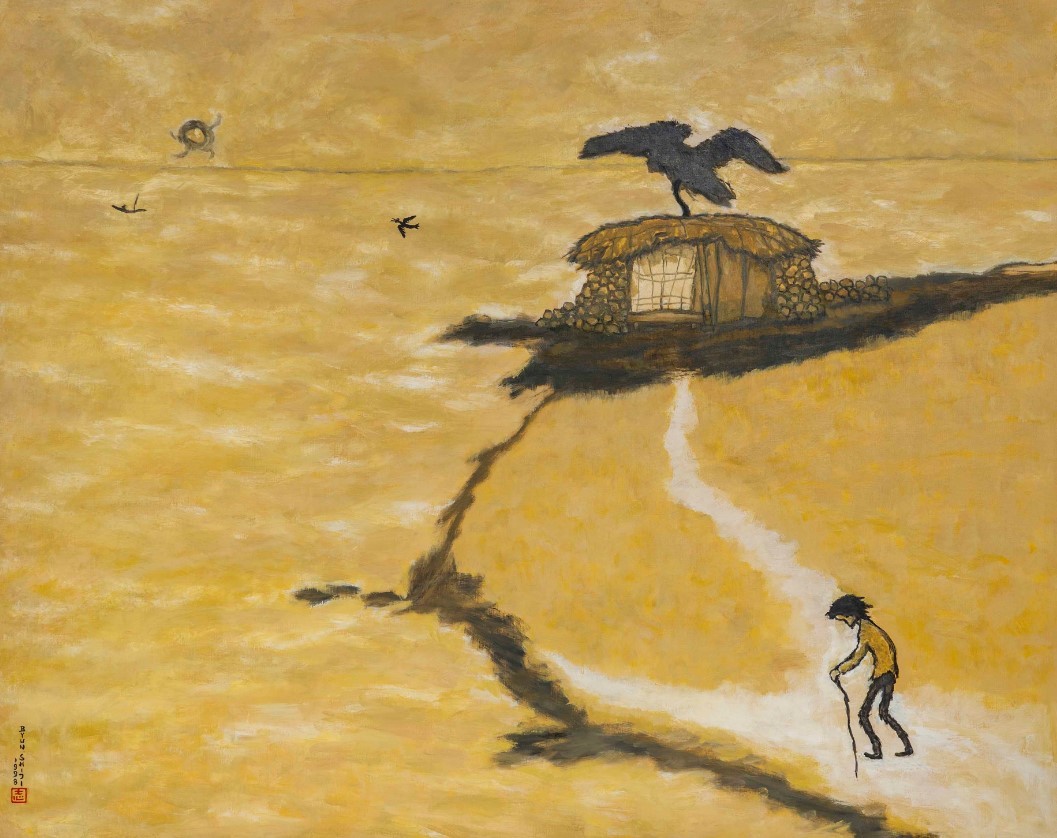 "Forked Road” by Byun Shi-ji (Gana Art)
“The change in Byun’s paintings caused Japanese art circles to lose interest in his works. His state of mind would have been reflected in the paintings done during his life in Jeju Island,” Byun Joung-hun, the artist’s son who runs Foundation Art Shiji, told The Korea Herald. “My father continued to paint even while he was hospitalized, right up to a few days before his death.

“The paintings he did on Jeju Island reflect his unique identity. While many painters flew to European countries, he persisted living in his hometown.”

Byun was the first Korean artist whose works were displayed at the Smithsonian National Museum of Natural History in Washington in 2007. The two works -- “Boisterous Dance” and “Going the Way as It Is” -- were returned to Korea in 2017 after a 10-year contract for the long-term loan expired.

“Byun Shiji, the Light and Wind of the Times” runs through Nov. 15 at the Gana Art Center in Jongno, central Seoul.