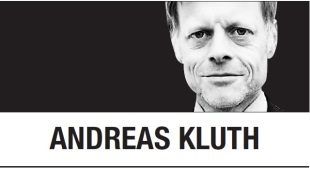 Kastellorizo is one of those places that might become a cause for war even though most people couldn’t find it on a map.

The combatants would be Greece and Turkey, formally NATO “allies” but in reality perennial foes since the sloppy unraveling of the Ottoman Empire. And their war would be less about the island as such than about the Mediterranean waters said to belong to it. That’s because underneath the sea bed, there may be lots of oil and gas.

Kastellorizo derives from “red castle,” after its landmark as seen in the evening light. Known to the Turks as Meis, the island is a charming place inhabited by a few hundred people. After a lively history -- Byzantine, Maltese, Ottoman and so forth -- it was transferred in 1947 by the victors of World War II from the defeated Axis power Italy to Greece. This all but guaranteed trouble forever after.

Just look at a map. Kastellorizo is far away from mainland Greece and also quite distant from Greece’s Aegean islands. But it’s literally swimming distance from the Turkish coast. At the risk of exaggeration, from Ankara’s point of view, it’s a bit as though an international conference had transferred New York’s Staten Island to China.

This situation wasn’t so bad as long as not much was going on in the open seas south of the coastline shared by Turkey and Kastellorizo. But now hydrocarbons are being discovered all around the eastern Mediterranean. The question has become: Who will get to drill in this part of the sea, Greece or Turkey?

This is where international law gets complicated. Greece claims much of those waters, citing the United Nations Convention on the Law of the Sea, in force since 1994. UNCLOS generally foresees countries asserting their sovereignty over 12 nautical miles (22 km) from their coasts. Beyond these “territorial waters,” they also get another 12 nautical miles as a “contiguous zone” of control. And they can establish an “exclusive economic zone” for 200 nautical miles from shore. This also includes the “continental shelf” -- that is, the seabed below and whatever oil and gas may be in it.

The Greeks, who are signatories to UNCLOS, therefore argue that their little outlier of Kastellorizo should project its own 200 nautical miles southward. After connecting some lines to other Greek islands, they want a map that would cut the exclusive economic zone Turkey desires roughly in half.

Unsurprisingly, Turkey isn’t happy about that. And -- like the US, incidentally -- it never signed UNCLOS. It’s still expected to obey what’s known as “customary” law, which is basically the weight of precedent and established practice. But it can’t be dragged to an international tribunal against its will.

That’s too bad in a way, because UNCLOS is actually quite flexible in such circumstances, says Robin Churchill, an expert at Scotland’s University of Dundee. In 2012, for instance, a court settled a similar dispute between Nicaragua and Colombia by granting only the 12-nautical-mile territorial zone to several Colombian islands that would have unduly sliced up the Nicaraguan economic zone. The outcome was accepted as “equitable.”

The eastern Mediterranean is a harder case. UNCLOS, also dubbed a “constitution for the oceans,” runs into limitations in such a crowded sea. All the continental shelves of the surrounding countries overlap. And those nations share histories of ancient grudges. The Greco-Turkish conflict, for instance, has a tortuous offshoot on the island of Cyprus, where an ethnically Greek republic in the south and an ethnically Turkish one in the north can’t agree on anything, except that they also want that gas.

The worst way forward is the one currently in the offing: a cynical game that may eventually be decided by brute force. Greece is doing a deal with Egypt that conflicts with another one between Turkey and Libya, and so on. Meanwhile, Turkish President Recep Tayyip Erdogan this week sent, yet again, a research ship accompanied by navy frigates into the contested waters. At one point this summer the Turks rammed a Greek ship, at another they were stared down by a French frigate and two fighter jets.

It’s tempting for Europe to simply line up behind Greece, as my colleague Ferdinando Giugliano urges. It’s a fellow member of the European Union, after all. By contrast, Erdogan is the region’s bete noir, stirring up trouble from Syria to Libya and Nagorno-Karabakh, while cracking down on civil liberties at home.

Unreasonable and aggressive as Erdogan is, however, the West should admit that Turkey has half a point when it complains that the Greek position on Kastellorizo is “maximalist.” Based on the spirit of UNCLOS, says Churchill, the cutting up of Turkey’s exclusive economic zone to such an extent seems unfair. To avoid war, therefore, the West should make Erdogan an offer.

One idea I like is to use Europe’s own experience after World War II as inspiration. In the 1950s, old enemies France and Germany placed coal and steel -- the industries of warfare -- under a joint authority that guaranteed shared access and benefits. Out of this “Schuman plan” grew what is today the EU. And what coal and steel were then, oil and gas are now.

Something similar could work in the eastern Mediterranean, if only its ancient enemies could also rise above their feuding and grasp their responsibility to prevent war. With luck, Europe will transition from brown to green energy fast enough so that nobody will even need all that dirty stuff under the sparkling blue sea anyway.