[H.R. McMaster] US foreign policy took a narcissistic turn after the Cold War. Here’s how to set things right 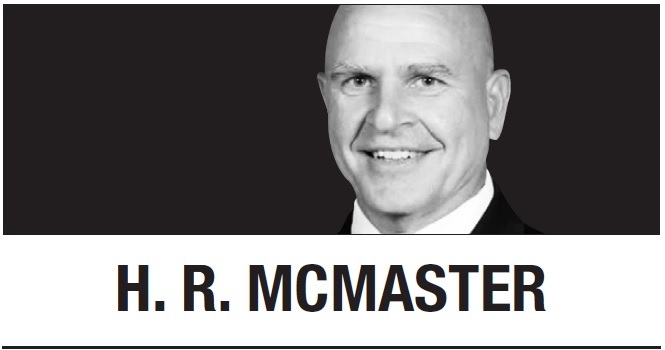 In 1989 I was a captain in the 2nd Armored Cavalry Regiment stationed in West Germany. Our regiment patrolled a stretch of the Iron Curtain that divided democracies and dictatorships. That November, the Berlin Wall fell and the Iron Curtain parted. The United States and the free world had triumphed over communist totalitarianism without firing a shot. The Soviet Union soon broke apart.

In retrospect, those victories, which held the promise of so much, marked the end of an era. They led to overconfidence and complacency. Many leaders forgot that the United States had to compete in foreign affairs and embraced three flawed assumptions about the post-Cold War era.

The first assumption was that the arc of history guaranteed the triumph of free and open societies over authoritarianism, making the expansion of liberal democracy inevitable. The second assumption was that the old rules of international relations and competition were no longer relevant, and that global governance and great power cooperation would displace historical rivalries. The third assumption was that America’s unmatched military prowess would guarantee victory over any potential enemy.

Autocracy is alive and well -- in Russia, in North Korea and in numerous other countries. Jihadist groups such as al-Qaida and the Islamic State have demonstrated they can neutralize US superiority in conventional warfare by engaging in asymmetric warfare. And a new great-power competition has emerged, as Chinese Communist Party leaders have spoken the language of cooperation while conducting one of the greatest peacetime military buildups in history, suppressing freedom at home and exporting their authoritarian model.

The flawed assumptions we made at the end of the Cold War stemmed from strategic narcissism: The tendency to define problems as we would like them to be rather than as they actually are.

The excessive optimism of the 1990s eventually shifted to extreme pessimism, spurred by the financial crisis of 2008 and the unanticipated length and cost of wars in the Middle East. Calls for American disengagement have gained steam this year as the nation has confronted the COVID-19 pandemic, economic recession and social unrest sparked by the murder of George Floyd.

That pessimism is now leading us into different mistakes. It has generated a bias toward resignation, and a tendency to view retrenchment as the best way to reduce costs and advance American interests. For example, the Trump administration portrayed recent decisions to withdraw the small contingents of US forces enabling Afghan and Iraqi forces to fight against jihadists as protecting -- rather than jeopardizing -- hard-won military gains.

That portrayal overlooks the lesson of the Obama administration’s withdrawal from Iraq in 2011, a move that created ideal conditions for a massive Islamic State offensive in 2014.

And we are making other mistakes. Although the Trump administration was right to demand that NATO allies do more to share the burden of collective defense, reducing US forces in Europe is unwise at a time when Vladimir Putin’s principal rival in Russia was recently poisoned with a military-grade nerve agent and the Kremlin threatens to quash calls for freedom in Belarus.

Today, strategic narcissism has fostered a sentiment common in both political parties that, after long and costly wars, US disengagement from overseas challenges would be an unmitigated good and that the United States is the principal cause of the world’s problems. Our presence abroad, the naysayers argue, creates enemies, inflames jihadist terrorism and drives nuclear proliferation.

In reality, American behavior did not cause these problems, and American disengagement would not solve them.

There is an alternative: sensible and sustained engagement. The COVID-19 experience reinforces a fundamental lesson of Sept. 11, 2001: Threats originating abroad, if not checked, can move rapidly across our world. Once they penetrate our shores, the cost to Americans can be immense. Moreover, it is much cheaper to deter Russia or China with strong alliances and forward-positioned American forces than it would be to bear the costs of a catastrophic war triggered by Russian or Chinese aggression.

We need now to embrace what the historian Zachary Shore terms strategic empathy, the recognition that others exercise influence over our collective future. Empathy displaces narcissism with an appreciation of the aspirations, and ideologies that drive and constrain our rivals. For example, understanding that Putin is driven by a sense of honor lost after the dissolution of the Soviet Union and a longing to restore his country to national greatness at the West’s expense should disabuse US and European leaders that relations with Russia can improve while he is in power.

But improved competence based on strategic empathy is not enough. America must also rebuild confidence at home. As the late philosopher Richard Rorty observed, “National pride is to countries what self-respect is to individuals: a necessary condition for self-improvement.” If we lack self-respect, how can we fight effectively in war or implement a competitive foreign policy?

While keeping in mind the need for self-criticism and the acknowledgement of imperfections in our democracy, Americans must rediscover and celebrate the virtues and great promise of our nation, embracing the principles in our founding documents that bind us together. Our political disunity is a vulnerability as great as our strategic narcissism.

No matter who is sworn in as president on Jan. 20, a concerted effort to build strategic competence and restore our confidence should be at the top of the agenda.


H.R. McMaster
H. R. McMaster, a retired US Army lieutenant general, was President Trump’s national security adviser from 2017 to 2018 and is the author of “Battlegrounds: The Fight to Defend the Free World.” He wrote this for the Los Angeles Times. -- Ed.