[Francis Wilkinson] Republicans have no plan for the future 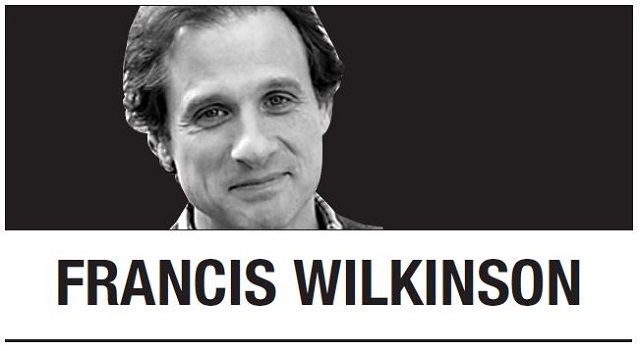 When the coherent half of the Republican ticket participated in the vice presidential debate in the US this week, it was an opportunity for viewers to learn what the future holds. Yes, Vice President Mike Pence may be a talking-point machine, but to a debate audience that’s a more useful device than a random-lie generator. You can learn things from talking points.

There’s only one problem: Republicans have no points to talk about. If elections are about the future, the GOP plans are the blank piece of paper to which President Donald Trump affixed his signature in his COVID photo-op at Walter Reed National Military Medical Center.

The Republican Party attracted a lot of attention, most of it bad, when it declined to produce a platform at its convention in August. In lieu of an explanation of its positions, it issued a short proclamation whining about the news media conspiring with Joe Biden and being mean. Less noticed is that the Trump campaign website offers no better guidance. The future doesn’t exist there, either.

How will the US exit the pandemic and economic crisis that has enveloped the nation? Who knows? Perhaps the jobs that have been felled will return as magically as the virus disappeared back in the spring.

The Trump website, like the campaign, lives in the past. The president who predicted 6 percent growth in gross domestic product includes a bullet point to note that during the glorious first quarter of 2019, GDP growth reached 3.1 percent. The glow from that triumph extends over the disjointed fragments of his campaign manifesto. “Hispanic, Asian and African American unemployment rates have all reached record lows under President Trump,” the campaign says from inside the bend of a time warp. In Trumpworld, the present is unreal and the future is dead.

The “post-policy” Republican Party has been a disturbing topic for several years. Writing in 2017, my colleague Jonathan Bernstein lamented the GOP’s reduction to “a nihilist message of unfocused resentment.”

The party began drifting into corruption and nihilism long before its vices took corporal form as the current president. Mitt Romney’s 2012 presidential campaign was intellectually coherent. But the GOP hasn’t offered a compelling vision of the future, a la Ronald Reagan, since at least 2000, when George W. Bush dipped, briefly, into a vague but intriguing notion called “compassionate conservatism.” (It never found form.) The party’s Trumpist vision, intentional cruelty aside, consists of panic with a bar across the door to keep the future from barging in.

Over the course of almost 90 minutes on Wednesday, Pence said little to make that vision more appealing. In regard to a climate crisis linked to the destruction of more than 4 million acres in California so far this year, he said that he and Trump believe that “forest management has to be front and center.” On the economy, the Republicans will “always put American jobs and American workers first.” On managing the rising power of China, “We want to improve the relationship but we’re going to level the playing field and we’re going to hold China accountable for what they did to America with the coronavirus.”

There was one feint in the direction of solidity, and the future: “President Trump and I have plans to improve health care to protect pre-existing conditions for every American,” Pence said. Yet the vice president knows well that the administration has no such plans and is right now suing to gut those protections after previously having failed in its effort to destroy them through legislation.

For her part, Kamala Harris also didn’t paint much of a picture, though she managed to zip through a few skeletal points about taxes, free community college and student debt. Of course, if you’re interested in learning more, the Biden campaign website has a section -- “Joe’s Vision” -- with 48 subsections laying out a range of plans in varying degrees of detail. If that’s not enough, you can consult the Democratic Party’s 92-page platform.

Looking through the plexiglass barrier made necessary by his administration’s historic incompetence, Pence offered no policies to compete with those of Harris. He presented no vision of a better life to anyone watching at home. Instead, Pence shut out the future and summoned viewers to join him in the rubble of disease, dissembling and decline that fear has wrought.


By Francis Wilkinson
Francis Wilkinson writes editorials on politics and US domestic policy for Bloomberg Opinion. He was executive editor of the Week. He was previously a writer for Rolling Stone, a communications consultant and a political media strategist. -- Ed.