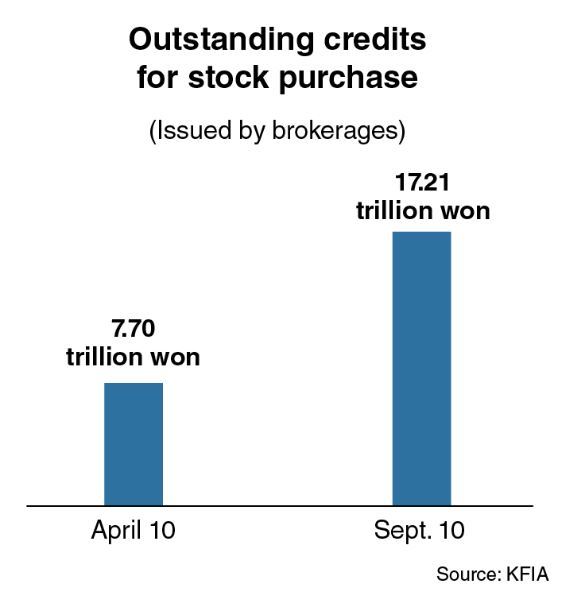 SEJONG -- The balance for credit-based stock purchases has shot up about 120 percent in South Korean capital market over the past five months to reach an all-time high.

According to the Korea Financial Investment Association, the outstanding credit for stock buying offered by brokerages came to 17.21 trillion won ($14.49 billion) as of Sept. 10.

By market, investors, including individual investors, owe brokerages for stocks worth 8.61 trillion on the first-tier Kospi and worth 8.51 trillion won on the secondary Kosdaq.

Investors should pay for the credit-based stocks in cash or by disposing of the stocks within several months.

This marked a 123.5 percent growth, compared to five months earlier on April 10, when the outstanding credit stood at 7.7 trillion won. Further, the balance has continued to renew its record highs on the Kospi and Kosdaq markets.

Capital market data suggests that local private investors made up the dominant portion of the credit-based stock buyers.

The situation involving the one net buyer and the other two net seller positions among the three major groups of investors was the same on the Kosdaq.

Individual investors, through unprecedented buying since April, have continued to take the initiative in backing up the indexes despite the risks and uncertainty amid the ongoing spread of the novel coronavirus.

A research analyst said private investors’ active purchases were somewhat attributed to the financial authority’s six-month “ban on short-selling,” which was issued in mid-March. The ban, whose expiry was initially mid-September, has been extended more six months to mid-March 2021.

“Recently, the net selling among foreign and local institutions are not in a tough level,” he said.

Short selling is an investment technique in which investors (mostly institutional investors) try to reap gains by dumping borrowed stocks and repurchasing them at lower prices later.

Market observers, nevertheless, reiterate that the high risks of investment via credit-based purchases.

They point out that if the Kospi plunges, the unavoidable situation that individuals would face “automatic sell” orders for stocks they bought on credit, regardless of their intentions.

The automatic sell orders come when the capital value of the credit-based stocks to the advanced down payment falls below 140 percent -- the standards set by the brokerages. Huge losses are inevitable in that case.

“It is time to be wary of prices overshooting, given sagging business sentiment and lingering uncertainty over corporate operating profits,” said an investor at a stock bulletin board.

Currently, the government is taking huge taxes on stock trading, while the brokerage firms are enjoying the growing interest income from issuing more individuals credit at relatively high rates.

Many small investors at the bulletin boards share the view that buyers who fund purchases through reckless borrowing have often been easy prey on the market.