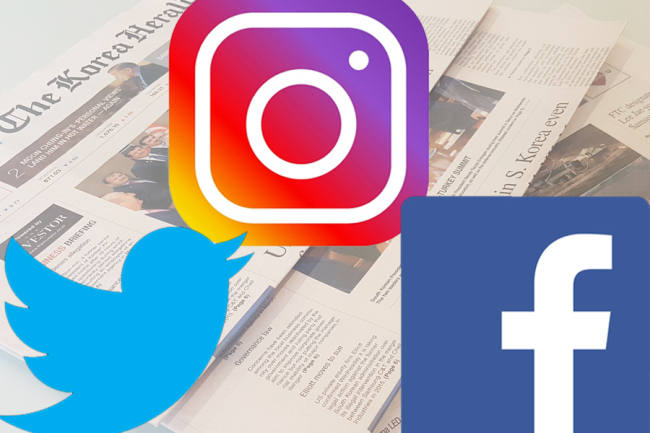 South Korea’s social media penetration rate has reached 87 percent, the third highest among nations around the globe, according to a local report Monday.

South Korea’s social media penetration rate as of the first quarter this year was 80 percent higher than the global average of 49 percent, according to the latest report by DMC media and Digieco, an economic research institute affiliated with KT.

The report, which quoted related data collected by We Are Social, added that the United Arab Emirates’ social media penetration in the first quarter was the highest with 99 percent, and Taiwan and South Korea followed with 88 percent and 87 percent, respectively.

By application, Naver Band had the most monthly active users -- 16.9 million -- in South Korea as of June, followed by Instagram with 11 million and KakaoStory with 9.9 million, according to the report. Facebook reached 9.8 million.

Those in their 40s and 50s most frequently used Naver Band and KakaoStory, the report also showed. The average monthly users for both of the local social media platforms among those their 40s and 50s surpassed 10 million combined.

The average amount of time spent on Twitter by South Korean users each month reached 594 minutes, followed by Facebook with 567 minutes and Instagram with 441 minutes, the report also showed.