[Kay C. James] We must educate future generations on myths and realities of socialism 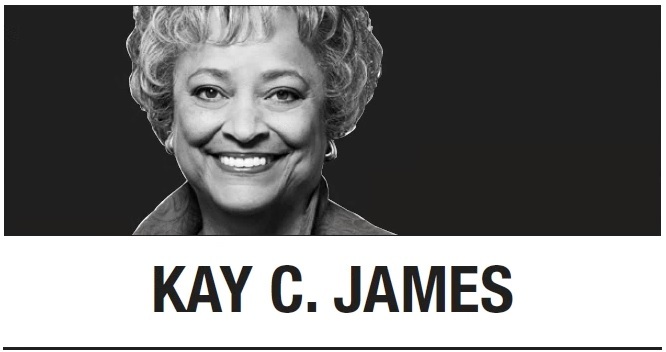 A frightening 70 percent of millennials say they would back a socialist candidate for office. And today, we are seeing many socialist ideas gaining traction, such as “free” college tuition for all, government-run health care and a guaranteed income even for able-bodied people who don’t work.

While we can blame some of the attraction to socialism on its false promises of fixing every social ill, the nearly inescapable indoctrination present in our schools and universities, and the members of the media who carry its water, some of the blame lies with us, the older generation.

Too often, we have failed to educate newer generations about the myths and realities of socialism, instead leaving it up to others who have a different agenda. In partial reparation, then, here are six of the more persistent myths debunked.

Myth No. 1: Socialism has never failed because it has never really been tried. In truth, socialism has failed everywhere it has been tried for over a century, from the former Soviet Union to the democratic socialism of Israel, India and Great Britain after World War II to present-day Venezuela. Its economic system doesn’t work; it doesn’t respect human rights; and because it works against human nature, government must constantly suppress the people to keep them compliant.

Socialism’s failures abound across the globe. Venezuela, for example, once had one of the world’s largest oil reserves. Today, 90 percent of its people live in poverty, and they need a wheelbarrow of Venezuelan bolivars to buy a loaf of bread.

Even socialism’s “best” experiments didn’t work. “The world’s most successful experiment in socialism,” a prominent economist wrote about Israel, has “resolutely embraced capitalism.”

Myth No. 2: Denmark (or your favorite Scandinavian country) is a prime example that socialism works. The reality is, Denmark has a free-market economy that produces the goods and services that the government then heavily taxes to finance an extensive welfare state.

Despite American socialists’ claims, Denmark’s prime minister once told a shocked Washington, D.C., audience: “I would like to make one thing clear … Denmark is a market economy.” The nation actually has a great deal of economic freedom with few business regulations and no minimum wage (along with the other Scandinavian countries). Like Denmark, Sweden, Finland and Norway all rely on free-market capitalism to finance their expansive welfare systems.

Myth No. 3: Socialism is compassionate and caring. In truth, socialists only care about the collective, not the individual person. To justify his Orwellian actions, Lenin used the cynical cliche, “You can’t make an omelet without breaking a few eggs.” Well, they weren’t eggs but humans, and 100 million of them have been victims of Marxist-Leninist socialism, according to Harvard’s “The Black Book of Communism.”

In Maoist China, children as young as 12 were subject to capital punishment, women were forced to work in coal mines and workers were harassed during their lunchtime with threats of prison if they returned to work late. In the Soviet Union, people faced perpetual surveillance, leading one dissident to say, “We lived in a world swarming with invisible eyes and ears.”

Myth No. 4: Socialism places power in the hands of the people. Actually, true socialism depends upon the dictatorship of a military leader or a political party.

After 60 years of the “Revolucion,” the Cuban people are still waiting for the democratic election that Fidel Castro promised them. Socialist leaders promised to bring down dictators only to replace them with their own Marxist dictatorships in places like China, North Korea, Vietnam and Laos.

Myth No. 5: Karl Marx, socialism’s founder, was one of the great thinkers of the 19th century. Marx was wrong about nearly everything. Nearly 200 years after “The Communist Manifesto,” the nation state has not withered away. Capitalism, not socialism, rules the global economy. Workers have not turned into revolutionaries but entrepreneurs. And private property -- rather than being rejected -- is a cornerstone of every prosperous country.

Myth No. 6: Human nature is malleable and easily changed by government edicts. For 70 years, the Soviet Union tried to suppress people’s innermost desires for freedom and for improving their lot in life. In practice, socialism depends on constant policing by the state and huge prison camps like the Soviet gulag and the Chinese laogai to coerce people and maintain power.

The inalienable rights outlined in the Declaration of Independence and protected in the US Constitution reject the Marxist idea that people can be molded like clay by a central government.

These are just some of the many myths and realities of socialism, an ideology that has failed everywhere it’s been tried. We must each in our own way work to enlighten our children and grandchildren about its evils and its failures. We must be there to counter the falsehoods they are learning from professors, the media and pop culture, or we will surely lose another generation to this poisonous ideology.