At the center of the ongoing COVID-19 resurgence is Sarang Jeil Church, led by a controversial pastor with far-right, extremist political inclinations, which has emerged as the country’s second-largest virus cluster with over 600 confirmed cases. But smaller-scale breakouts have popped up nationwide at scores of other Protestant churches as well.

Although virus breakouts at religious gatherings are not unique to Korea, some unique features of Protestant churches here appear to have played a role in making them hotbeds of virus transmissions.

For believers, a church is not just a place of faith and worship.

Beyond their original core purpose, churches in Korea often play a unique role as social hubs in their respective neighborhoods by hosting meals and tea gatherings and organizing classes, excursions and meetings among their congregants and more.

“For people in all age groups, the churches are deeply related to their daily lives,” said a spokesperson from the National Council of Churches in Korea, one of the four major Protestant groups in the country.

“A church is a community, and it serves as a hub for members with diverse interests and backgrounds to join together with faith as a common factor.”

An individual church’s financial stability is directly correlated with how well it builds this community, the NCCK explains. With a greater membership base comes a larger amount raised as offerings during regular worship services.

“How big of a role the church plays in its neighborhood determines how long the church will survive and grow,” the spokesperson added. “But that has been very much difficult for everyone since the coronavirus outbreak.”

Churchgoers agree. Many Christians in Korea consider meal-sharing and bonding after services as a core part of their Christian faith and life.

“The church I have gone to for the past few years always offered after-service lunches and afternoon activities for all age groups,” said Choi Jin-hyang, a 26-year-old churchgoer in Yangsan, South Gyeongsang Province.

“They were integral part of the Sunday worship experience for many of the attendees.”

Choi’s church of around 750 members has canceled all in-person services and activities since February when the coronavirus situation became serious. The church limited the number of physical attendees for weekly services to below 30 percent and reverted almost everything to online, she said.

But not all churches have done so.

Because many Protestant denominations are relatively decentralized, also played a part, some experts and pastors said. Unlike Catholic churches or Buddhism which have a centralized authority setting rules for members to follow, including in times of crisis like the pandemic, many Protestant churches act with a large degree of independence.

“All an individual church cares about is itself, and for that reason, they can’t help but worry about the retention rate of its members and recruiting efforts for new ones,” said a pastor at a church in Gangnam-gu, southern Seoul, who wished to remain anonymous.

A lack of a greater vision for the sake of all churches, congregations and the general public has allowed the entire Protestant church community to get blamed for the second wave, the pastor lamented. 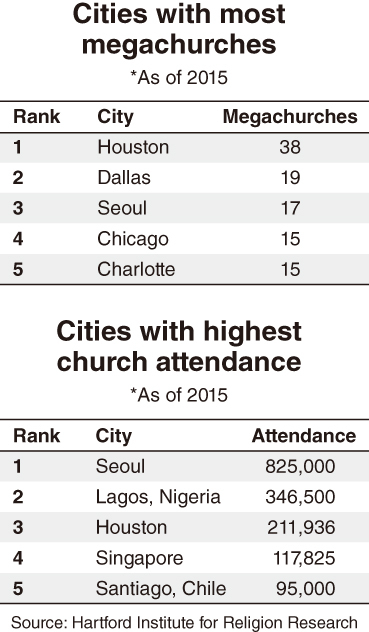 Right to worship vs. public safety

When it comes to restricting people’s right to worship, the government has been too cautious to act proactively to address transmission risks, pundits said.

In between the first peak in late February-March and now, the country has seen a steady stream of virus cases linked to Protestant churches, but authorities reacted with only pleas to churches to refrain from high-risk activities.

A ban on church activities except main worship services was put in place on July 10, but was lifted just two weeks later on July 24, as complaints mounted from churches and their congregations.

The government banned on-site church services in Seoul and the surrounding area from Wednesday.

Epidemiologists have warned that virus can easily spread through the air when hymns are sung and sermons are preached inside closed spaces. Korea’s many megachurches often have 2,000 or more people attending a tightly-packed weekend worship service, which they argue should have been a reason for greater vigilance.

According to data from the Leadership Network Global Megachurches List, Seoul had the third-highest number of megachurches in the world with 17 and ranked first in average weekly attendance at 825,000 in 2015.

“It’s a given that most churches closely followed the social distancing guidelines issued by the government and recommended by experts, and even after regulations were eased, most of the churches still followed,” said Lee Jae-gap, an infectious disease doctor at Hallym University Hospital.

“But it was those few megachurches going out of control and not caring about the potential of spreading the virus.”

Sarang Jeil Church, with over 4,000 registered members, is a prime example.

As of Wednesday at noon, 623 confirmed cases have been traced to the church, since the first case was reported there on Aug. 12. Infections were reported at other megachurches, including Yoido Full Gospel Church, the country’s largest church with nearly 560,000 congregants and Kumnan Methodist Church with over 140,000 people in its congregation, putting authorities on edge.

The biggest cluster in Korea so far is the fringe Christian sect Shincheonji Church of Jesus –which is not a member of any of the four main Protestant associations. Over 5,000 cases were linked to Shincheonji, making it the epicenter of the country’s first mass outbreak in late February.

“We’d like to offer an apology for triggering the wide spread of the virus in the community because of some churches violating the rules,” the United Christian Churches of Korea, another of the country’s biggest associations of Protestant churches, announced in a statement.

The associations also asked member churches to revert back to online services and halt all on-site meetings, gatherings and activities for the next two weeks.

Yet it became evident Thursday that some other churches disagreed with the apology.

The chair of the Communion of Churches in Korea, which represents some 39 conservative churches and 10 religious organizations in Korea, sent out a text message to its members Thursday, informing that it resists the government’s ban on in-person service in the capital region.

“All churches will focus on virus control by closely following the government’s sanitary guidelines, but we cannot stop our life-like services,” read the message written under its President Rev. Kwon Tae-jin. The group later said it was sent by error and that the association will cooperate with disease control authorities.

Some activists are calling for the Korean Protestant church to consider a major overhaul of its whole system. They believe now is the opportunity for the Christian community to focus on faith and care for the community, rather than searching for the wealth and prosperity of their own individual churches.

“Korean churches have come far, and it might be difficult to return where they were before,” said Pang In-sung, a pastor serving as a senior counsel for Protest 2002, an activist group for the Christian community.

“But this virus outbreak is raising administrative and moral issues that the Protestant community has ignored for years. We should not take this lightly.”

Pang argued that churches should now focus on finding new ways to stay stable without relying too much on the size of the membership base. He believes that churches and pastors will find ways to thrive and prosper while caring about the virus outbreak and rely less on in-person services and gatherings.

“It’s probably clear by now that gathering inside the physical church building is not the best solution,” he added. “Churches and their leaders should contemplate on how to care for the community and communicate well with their members with or without the virus.”