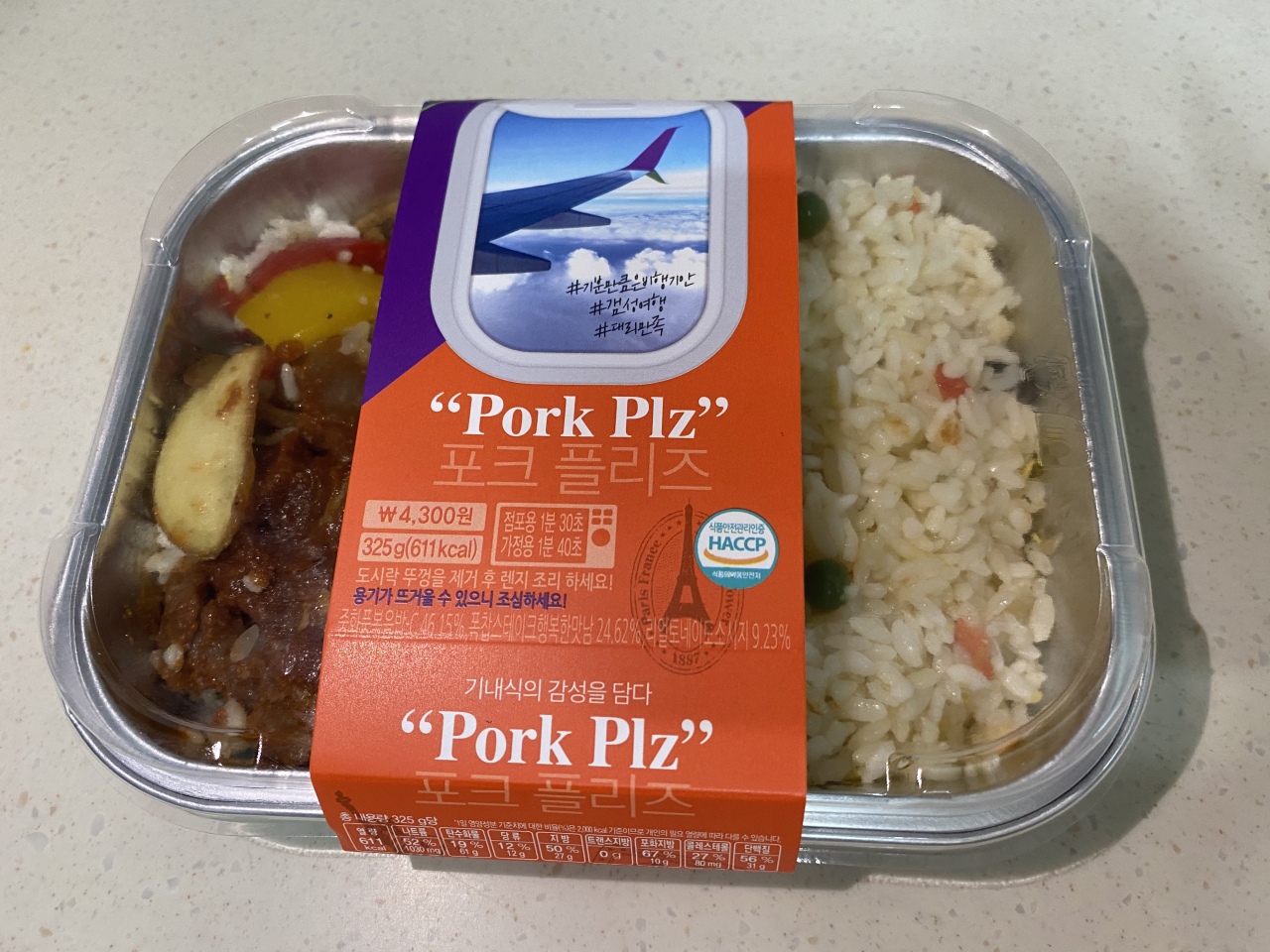 Whatever your view of airplane food, the idea is not as niche as it may sound. After all, airline food reigns among the popular mukbang ideas for South Korean YouTubers, given its association with international travel and holidays, which sometimes rack up millions of views.

The novel food product series -- “Pork Plz,” “Chicken Plz” and “Beef Plz”-- which comes in aluminum containers to “recreate the feeling of an in-flight meal,” has been a hit, according to the company.

While the dishes take the idea from airlines, they are made by an ordinary food company and not an airline catering service.

“Social media reaction has been warm over its cuteness and sales of the meals have gone up by 22 percent in the first week of August, compared to last month,” one CU official said.

The ready meals come against the backdrop of an industry-wide crisis in aviation, which has remained among the worst hit parts of the economy since the pandemic broke out.

International flights have come to a halt as the daily number of passengers at Incheon Airport dropped by 97 percent in recent months compared to last year. Talks to acquire two airlines, Asiana Airlines and Eastar Jet, have also gone cold -- and so has the airplane food.


“Production has dropped about 90 percent, similar to how the number of passengers has,” Director of LSG Sky Chefs Korea Kim Ki-jin said, an in-flight catering service provider and a subsidiary of Lufthansa.

“With the help of employment subsidies, about half of staff have been placed on leave while the rest are at work. Some have quit including members of the staff at sub-contractors,” Kim said.

With global air traffic projected to return to pre-pandemic levels only by 2024, according to the International Air Transport Association, while employment subsidies from the government dry up, airline catering companies are being forced to pivot to survive.

“We don’t have plans to sell ready meals in the general market as of yet but we are seeking to launch different businesses,” he said, without further elaborating.

“We can’t just sit back and wait,” he added.

On the few international flights that the airline is still flying, food is being served in disposable containers that have replaced plastic ones by flight attendants wearing personal protective equipment such as goggles, masks and gloves.

And in a further sign of the seriousness of the situation, South Korea’s flag carrier is poised to sell the catering portion of its business to private equity fund Hahn & Company. While the deal is not complete, the two signed a memorandum of understanding in July as the airline seeks to secure funds to overcome a liquidity crisis. The move has been met with opposition from the labor union.

Challenges lie ahead for airlines in South Korea -- including legal hurdles, as in-flight meals are often made in a customs-bonded area where tariffs are exempt. While no South Korean airline has yet to capitalize on rebranding their in-flight food, others have taken the initiative.

“You can enjoy without having to fly,” the airline said in a Facebook post on Thursday as it announced extending the service for one more month following positive feedback.

Canadian airline Air North has been selling a selection of frozen meals ranging from apple crumble and meatball pasta to “test flight cheesecakes.”

With most flights being grounded, airline food might be the closest we have to the long-haul flying experience for now.