The “Nucleus” paintings -- which looked like arrangements of pipes and were first showcased in 1967 -- came as a shock to Korea’s art world, which centered on Art Informel and expressed the pain and anger left over from the Korean War. Art Informel works were often referred to as “hot abstract paintings” because of the emotion they conveyed.

The National Museum of Modern and Contemporary Art, Korea, is hosting a retrospective exhibition to honor Lee’s contributions to the country’s contemporary arts tradition. This year marks the 30th anniversary of his death. The exhibition at MMCA Gwacheon, “Lee Seung-jio: Advancing Columns,” shows his 90 paintings and 50 archival materials. 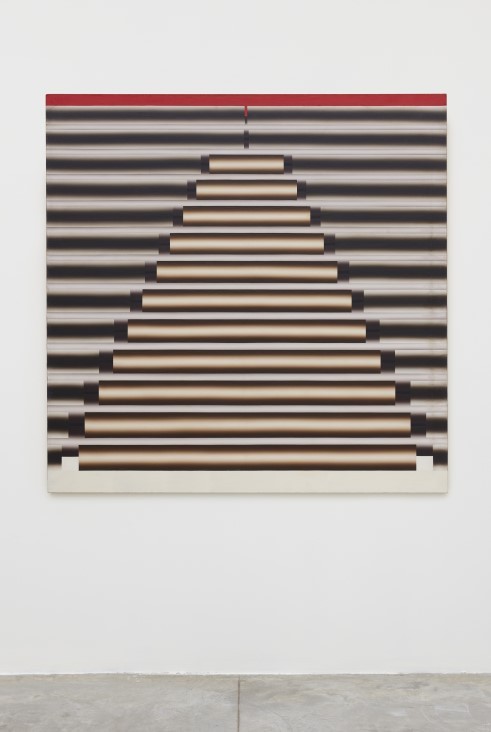 "Nucleus F-G-999” by Lee Seung-jio (Courtesy of the artist’s family)
Lee was one of the avant-garde artists who began to flourish in the early 1960s after the April Revolution, a mass democracy movement against then-President Rhee Syng-man, the republic’s first president, who held power from 1948 to 1960.

During the political turmoil, Lee yearned to break away from the artistic conventions of the day and founded the avant-garde art group Origin together with Suh Seung-won and Choi Myoung-young. The three were alumni of Hongik University, at the time a prestigious art school in Seoul, and Origin focused on geometric abstraction paintings devoid of emotion. In 1969 Lee also became a founding member of the Korean Avant-Garde Association.

“The pipe-like paintings also seem to represent speed and tension that remind (one) of urbanization in Korea in the 1960s and 1970s,” said Lee Dan-ji, a curator from the exhibition team at MMCA. “All of the titles of his works at the exhibition include the word ‘nucleus,’ which gives an image of the industrialization and machine civilization of the time.”

An excerpt from an interview with the artist -- published in a 1982 book by Shin Hang-seop and displayed at the exhibition -- offers a glimpse into the process behind the “Nucleus” series, the curator added.

“I was travelling on a train,” the artist states in the passage. “I was lost in thoughts for a while with my eyes closed, and there was something that flashed across my retina. I snapped my eyes open. But nothing remained.”

Upon returning home, the artist continues, he went home and worked through two nights straight with what was left of the image in his mind.

Each of the “Nucleus” paintings required a repetitive, labor-intensive process that involved masking tape and a wide, flat brush. His geometric abstraction art is also referred to as optical art -- something that was rarely seen in the Korean art world at the time.

Since reopening July 21, the MMCA takes online reservations in advance on its website (www.mmca.go.kr). The museum closes every Monday, and admission is free during the pandemic. The exhibition “Lee Seung-jio: Advancing Columns” runs through Oct. 4 at MMCA Gwacheon.