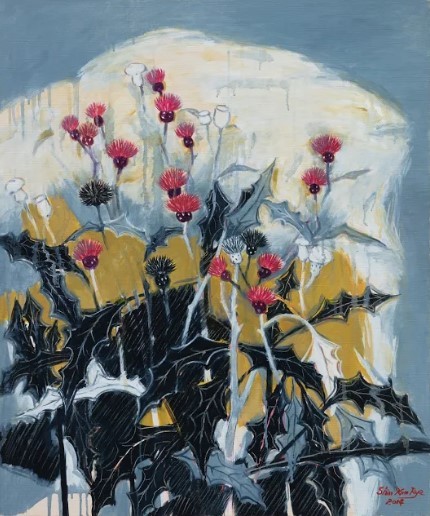 "Thistle” by Shin Kum-rye is on display at her solo exhibition “The Spirit of Painting.” (Whanki Museum)
Painter Shin Kum-rye is attracted by wild flowers -- blooms that persist despite a hostile environment.

Of them, thistles are her favorite.

“The leaves of thistles, they look quite defiant, which is really attractive to me. I feel like painting when I see this type of flowers,” Shin told The Korea Herald on Tuesday at Whanki Museum.

The 94-year-old artist, who is based in Seoul, is holding a solo exhibition, “The Spirit of Painting” at the museum in central Seoul, showing 55 paintings and drawings, including new works completed this year.

Born in 1926, Shin never gave up her identity as a painter despite the challenges of the Japanese colonial era (1910-1945), the Korean War (1950-1953), and the conventions that had hindered women in pursuing artistic careers.

Shin is one of the first graduates in painting of Ewha Womans University and among the first generation of painters who were educated at art colleges in Korea after the country gained independence from Japan in August 1945. Shin entered the university in the fall of that year.

“There were 60 art students at the college in the first year but only 17 students graduated because my university banned students who got married,” Shin said. “Every semester, friends were gone.”

Now Shin is the only one of her four classmates who are still alive who regularly holds exhibitions. Shin is also one of founding members of Korea Women Artists Association that was established in 1972.

Her first solo exhibition in five years includes “Winter,” a painting of a giant maidenhair tree that took a month to finish. Shin used a fine brush and broken disposable wooden chopsticks with Indian ink to express the delicate branches of the tree.

“One day I ran into the tree near Gyeongbok Palace, and it was really impressive,” Shin said. “I took a photo of the tree and came back to my workroom to paint it.” 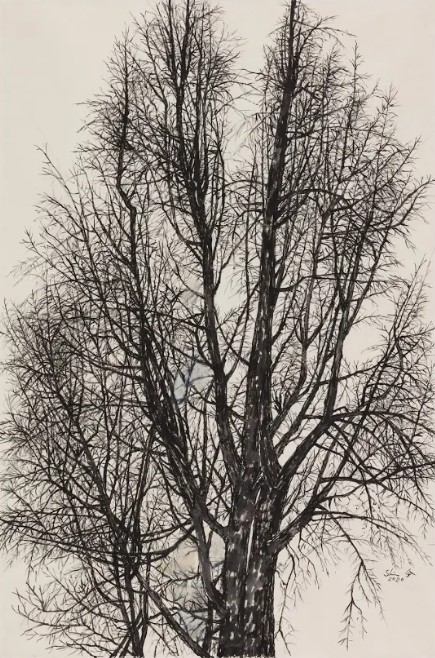 "Winter” by Shin Kum-rye is on display at her solo exhibition “The Spirit of Painting.” (Whanki Museum)
Shin found her talent in painting when she was young.

“In elementary school, we were forced to write consolatory letters to Japanese soldiers. But I was always told to draw on post cards instead of writing letters,” she said.

When the Korean War broke out in 1950, South Koreans had to flee to southern regions like Busan where many artists ended up gathering during the wartime and organized joint exhibitions. There, she met painter Nam Kwan, who later became her husband.

Nam was already widely known in the country as a pioneer of abstract art when the two tied the knot. Nam, however soon left for Paris where he successfully expanded his career, winning the first prize at the 1966 Biennale de Peinture in Menton surpassing other renowned artists such as Pablo Picasso. Nam died in 1990 from bronchial disease.

Shin expressed regret that although there are many talented female artists, they are given less attention than male artists both in Korea and other countries.

“I have seen many female artists even today who they discontinue their art while raising children or after marriage,” she said. “I would advise them to stick to painting every day even with ballpoint pens on a small piece of paper so that they do not lose their sense of painting.”

A large portion of Shin’s work is made up of drawings in pencil or ballpoint pen.

Since turning 90, the artist finds it hard to stand for more than an hour to paint because she gets dizzy while painting.

“Preparing the exhibition was very challenging for me. But you will never know how rewarding it is to see the works once completing them,” Shin said. “Painting is something I will never give up as long as I am alive.”

Shin said she always tries to think positively, which helps her stay healthy.

“The COVID-19 pandemic has taken away chances to meet people. But it made me paint more than ever at home instead.”

Her artworks are owned by renowned national and private museums, including the National Museum of Modern and Contemporary Art, Korea and Seoul Museum of Art.