Rules in the electric vehicle race are simple: one with the longest range wins.

However, reaching such a goal hasn’t been easy, as making current lithium-ion batteries more powerful increases the risks of explosions.

For this reason, automakers have been seeking alternatives, and they may have found one: solid-state batteries. Also dubbed as dry batteries, they use solid electrodes and electrolytes instead of the liquid or polymer gel electrolytes found in lithium-ion or lithium polymer batteries.

The potential partnership between high-profile business leaders immediately brought the spotlight on Solid Power, a leading solid-state battery developer based in the US whose strategic investors include Samsung Electronics, Hyundai Motor, BMW, Volta Energy Technologies, Solvay, Ford and Sanoh.

“Lithium-ion batteries are approaching their theoretical limits on achievable energy density and specific energy. Therefore, if market demand rises for even higher energy cells, then the community must consider new technologies, solid-state in particular,” Solid Power CEO and co-founder Doug Campbell said in an interview with The Korea Herald.

“Solid Power’s all solid-state batteries are inherently more stable across a broad temperature range, and can provide a 50-100 percent increase in energy density compared to the best available rechargeable batteries. Greater energy density translates to greater range for EVs.”

As to why solid-state batteries demonstrate higher energy density, the CEO mentioned a major structural difference.

The doubling of energy density is enabled by the lithium-metal anode. Metallic lithium is more than 10 times greater in energy density than the graphite anodes used in current lithium-ion batteries.

“By enabling a metallic lithium anode, we can deliver energy density and specific energy that greatly surpasses the best available rechargeable batteries.”

“By around early 2022, we anticipate samples to reach approximately 100 ampere hour in cell capacity. We are currently planning for full mass production by 2025,” the CEO said. The capacity of an average power bank for smartphones ranges between 20 to 30 Ah.

Currently, the energy capacity of a lithium-ion pouch cell manufactured by one of the three Korean battery makers stands at 50 Ah, though research is underway to reach 100 Ah. All three of them do not have samples of solid-state batteries yet.

Of them, Samsung SDI has been showing most progress in the technology. Samsung Advanced Institute of Technology said in March it has solved problems related to dendrites -- needle-like crystals that can develop on the anode of a battery during charging and reduce the battery’s lifespan and safety. However, Solid State doubts the claims.

“However, at Solid Power, like SAIT, we have been able to show reliable operation of our cells up to very high current densities, which are approaching automotive requirements for battery recharge rates. Therefore, and provided the cell is kept below a so-called ‘critical current density’ above which dendrites form and short-circuit the cell, the cell will operate reliably.”

Above all, Solid Power emphasized the safety of its solid-state batteries.

“Unlike what occurred with the Samsung Galaxy Note 7, a solid-state cell would never have resulted in a product recall due to battery thermal runaway concerns,” he said, citing how abuse conditions or manufacturing deficiency can cause such incidents.

This is because solid-state batteries contain no flammable liquid electrolytes, whereas lithium-ion batteries are charged with electricity generated when lithium-ion travels from cathode to anode. 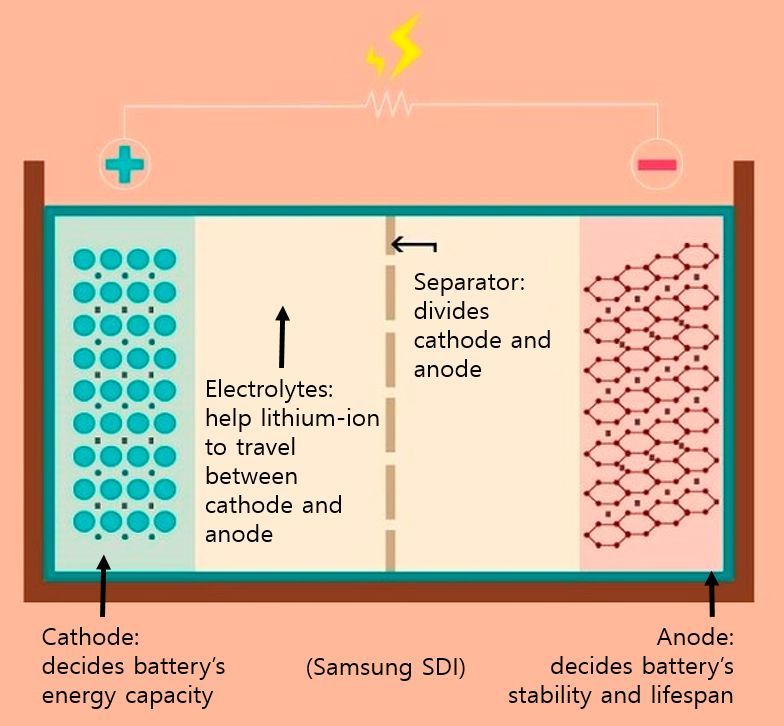 Solid Power’s all solid-state batteries replace the liquid with a sulfide-based solid ion-conducting electrolyte, which he says enhances the safety of the battery.

“We have demonstrated fully benign failure under many different types of abuse conditions such as overcharging and hotbox testing.”

Despite its enhanced performance and safety, a major challenge lingers for its commercialization: expensive price.

It has been market perception that solid-state batteries with technological advancements cannot necessarily become the new trend in the EV battery market as lithium-ion batteries are becoming cheaper with proven safety levels.

However, Solid Power is confident of reducing costs.

While agreeing that there is no guarantee for commercial success of solid-state batteries, Campbell said he was ready to compete against lithium-ion on a cost-basis as it has compatibility with the current industry standards in roll-to-roll processes and the existing lithium-ion battery industry.

“We focus on new materials required in our supply chain for which we are increasingly confident that these new materials will achieve our aggressive cost targets at-scale given that there is nothing inherently expensive in their manufacturing process.”

For instance, Solid Power focuses on processes that people would find common with lithium-ion roll-to-roll battery production today, he explained.

“We want to ensure that the billions in capital being invested for today’s gigafactories will still be applicable for the scale-up of all solid-state batteries.”