[Adam Minter] On COVID and protests, some good news 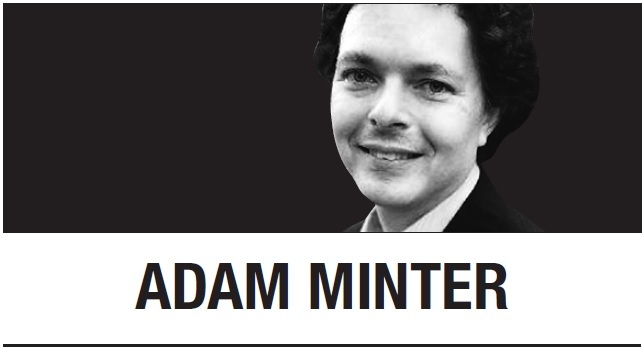 On Tuesday morning, cars and pedestrians lined up for free COVID-19 tests in south Minneapolis, six blocks from where George Floyd was killed last month. As protests flared after his death, Minnesota’s Department of Health had set up the testing site and encouraged demonstrators to visit in hopes of stemming a potential new outbreak.

Long lines at this center and three others in the Twin Cities suggest that, far from being complacent about the risks of taking to the streets in a pandemic, the protesters were all too aware of them.

Fortunately, expectations of a spike in cases haven’t been borne out -- at least not yet. The health department has in fact reported diminishing numbers of new infections since the protests started, as well as data showing that self-identified protesters have lower positive rates than others. It seems to be a widespread phenomenon: State and local governments across the US, from Sacramento to coastal Virginia, have reported lower-than-expected infection rates following the demonstrations, though few have data as robust as Minnesota’s.

To understand what might account for this encouraging trend, and what it might portend for future lockdowns, I talked to Kris Ehresmann, director of the Infectious Disease Epidemiology, Prevention and Control Division at the Minnesota Department of Health.

Ehresmann, an epidemiologist, oversees the state’s efforts on issues ranging from HIV to foodborne illnesses to -- most recently -- the coronavirus. As more and more demonstrators took to the streets, she said, many people were asking if COVID cases could spike.

“And we said, ‘Yeah, absolutely,’” Ehresmann told me over the phone. “You’ve got situations in which you have large groups of people coming together, and likely not socially distanced.”

She wasn’t alone in this concern. In early June, as the protests spread outward from Minneapolis, plenty of prominent public-health professionals, including Dr. Anthony Fauci, cautioned that they might lead to increased infections. There were good reasons to worry.

Research has shown that the fast growth in coronavirus cases earlier this year was driven partly by mass gatherings such as sporting events.

In Minnesota, where daily case counts had seemed to be on the decline, the incentive to do something was strong. For starters, the health department provided face masks to community organizations that could distribute them to protesters. It also publicly called for those taking part to be tested for COVID within a week of demonstrating, and coordinated the establishment of free testing sites in areas close to where protests occurred.

As the data accumulated, officials saw some surprising results. According to numbers that Ehresmann shared with me, of the 3,200 people who have presented themselves for testing at community sites through Sunday, the positive rate was 1.8 percent. An additional 8,500 people got tested at clinics that opened specifically for attendees of mass gatherings. Their positive rate was 1 percent. By comparison, the rolling seven-day rate for the overall state population was 3.5 percent, with care facilities, prisons, homeless shelters and tightly packed workplaces showing much higher rates.

That doesn’t mean that there weren’t protest-related infections. “Obviously, we have seen some cases,” Ehresmann reminded me several times. “But the good news is that we have not seen the level of cases that we could have.”

As to what accounts for the low rate so far, she isn’t sure. “It could be that people were more mindful or cautious about things, and that the outdoors made a difference.” She paused briefly. “That we’re just plain lucky? All of these things.”

That so many protesters have presented themselves for testing certainly suggests that many may have exercised caution during the demonstrations. Likewise, the widespread availability of masks on the scene -- which many were clearly wearing in footage of the events -- didn’t hurt. But that’s no reason for overconfidence.

For now, Ehresmann is remaining vigilant. She’s keen to compare Minnesota’s data to what other states are gathering. Over the next few months, she expects that the results will inform public-health guidance on re-openings, mass gatherings and (perhaps) future lockdowns.

In time, officials should be able to act less on the basis of necessary precaution and more on the basis of data-informed science. Until then, authorities should continue to respect the constitutional rights of protesters while remaining vigilant about the risks.

Police and first responders should wear masks, encourage protesters to maintain social-distancing measures by opening streets and other public areas to allow for spacing, and continue to sponsor mass testing of those who take to the streets.

Protesters, in turn, should ensure that masks, hand sanitizer and distancing are as routine as placards. When possible, especially in vulnerable communities, they should also consider alternative methods of making themselves heard, including through car protests.

These measures won’t totally eliminate the risk of COVID, but they will help ensure that communities remain healthy as the protesters work to make them more just.