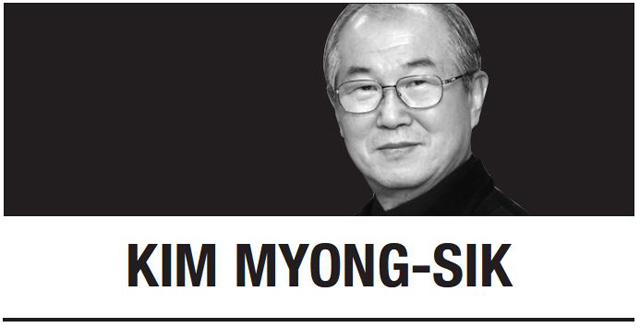 North Korea’s demolition of the South-North Liaison Office building in the border town of Kaesong this week was outrageous, but it also showed Pyongyang’s limitations in its actions against Seoul in the rising tensions between both nations.

The shapely four-story glass structure was built as a symbol of a new era of detente in the inter-Korean relations supposedly starting with the signing of an agreement of peaceful cooperation by President Moon Jae-in and North Korean leader Kim Jong-un in 2018.

It cost more than $20 million, funded entirely from South Korean taxpayers’ money. It was a childish idea for the Pyongyang leaders to destroy a building located in their own territory to vent anger over leaflets with messages criticizing the North’s Supreme leader. We in the South are sorry but do not feel a great deal of loss.

The North was carrying out a series of warnings served by Kim Yo-jong, younger sister of Kim Jong-un, that severe retaliatory actions would be taken for the balloons campaign conducted by refugees from the North. Kim Yo-jong, who has recently risen to what was regarded as the highest position under her dictator brother, said in a statement, “We hate the b------ that tolerates the atrocity (of sending balloons to the North) more than those who perpetrate the hostile action.”

She thus made clear to whom her words were addressed. The 30-year-old woman gravely declared, “The South is our enemy.” It was a rather quick abrogation of the accord the two leaders reached in their first summit at Panmunjom on April 27, 2018.

The intelligence community racked their brains only to reach the conclusion that North Korean leaders nowadays are in jitters over a lack of progress in its relations with the US since the spectacular events in Singapore, Hanoi and Panmunjom in 2018. Kim Jong-un, Yo-jong and their hardline aides Kim Yong-chol and Li Son-kwon want to spur President Moon to persuade Donald Trump to ease economic restrictions toward Pyongyang before the November election.

The balloons that suddenly rattled the inter-Korean ties carry 30-40 kilograms of miscellaneous items, including USB sticks containing South Korean dramas, $1 notes and cookies in addition to leaflets and posters with facts about the two Koreas. Plastic bottles filled with rice are floated to the North from Ganghwa and Sokmo Islands off the western coast.

Speaking in a press conference, Park Sang-hak, who heads the Fighters for a Free North Korea, called the Ministry of National Unification “the ministry of traitors” for its moves to suppress his campaign. The ministry formally requested police investigation of Park’s group on charges of violating some statutes on environmental protection and aerial safety. The Unification Ministry also took steps to withdraw the license as a civic organization of the Fighters group.

The Blue House (presidential office) seemed shocked by the vulgar language used by Kim Yo-jong. She, in the capacity as the first vice director of the United Front Department in the ruling Workers’ Party primarily responsible for anti-South Korean activities, announced that all channels of communication with the South were now cut and warned of a series of retaliation by the People’s Army.

The destruction of the liaison office awoke President Moon and his staff to the seriousness of the situation and forced them to change their attitude from the usual meekness. The National Security Council expressed “strong regret” over the North’s action that could undermine stabilization of peace on the Korean Peninsula.

“If the North continues to aggravate the situation, we will take strong countermeasures and the North will be held responsible for any consequences from them,” its spokesman said.

North Korea has taken some follow-up measures such as redeploying forces in areas close to the Demilitarized Zone and resuming military drills which had been suspended under the 2018 accord. Again in his policy of appeasement, President Moon chose the wrong step of offering to send high-level delegates to Pyongyang, which the North openly rejected.

The time has come for Moon to change his vision of the future in relations with the North. Since the change of government from right to left, the North has lorded over the South with Seoul’s negotiators always soliciting a few favors to prove cooperative ties. But why should it be like that? We are 30 to 40 times stronger than the North in terms of the economy, we have operated a democratic system, often praised by the world, and maintain a well-equipped standing army with annual expenditures comparable to those of major European countries.

Our government leaders should be able to read internal complexity in Pyongyang’s overreaction to the recent balloon campaign. Yo-jong’s meteoric rise in the North Korean power hierarchy may be taken for granted considering her bloodline. But it is unnatural by any standard to install a woman with such meager political merit in such a lofty position.

Seismic repercussions could be brewing underneath among the general public, the bureaucracy, and in the center of power in North Korea. It therefore is necessary to let her play a big role on her brother’s behalf such as in reacting to balloons flying in from the South.

Should we remain so docile to the North only because they have nuclear bombs while we have none? No. A nuclear-armed North Korea warrants continued world sanctions against it and the US nuclear arsenal being in strategic and tactical readiness in this region. Moreover, Kim Jong-un knows the total destruction his country suffered in the war that his grandfather started 70 years ago.

We do not have to be apologetic to them just because some activists here send balloons carrying leaflets that inform the Northern people of how their young ruler executed the husband of his father’s sister and had his half-brother murdered in a foreign airport. We just wish that our president, the unification minister and others in the core of power act with greater confidence in dealing with the North.

The show of hysteria by the Kim family in Pyongyang reveals the weakness of that society in which 25 million people are forced to sacrifice their basic needs in order for it to produce nuclear bombs and missiles. Our officials have swallowed too much humiliation as they made numerous concessions in pursuit of a false detente. It is time to put an end to the wrong pattern in inter-Korean relations of all give and no take.