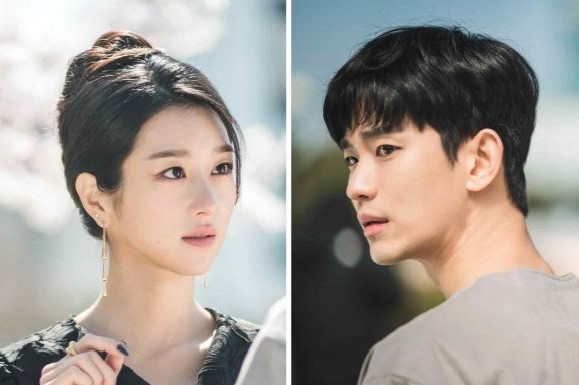 "It's Pkay to Not Be Okay" (tvN)
Kim Soo-hyun is returning to the small screen for the first time in five years with tvN’s new romantic comedy series “It’s Okay to Not Be Okay” set to start airing next week.

The upcoming weekend series is the first television role for the 31-year-old since he was discharged from the military last July. His most recent TV credits include “The Producers” in 2015 and “My Love From the Star” in 2013.

“I’ve been waiting for so long, I’m really nervous but also excited to come back,” Kim said Wednesday during a promotional media event. The event was livestreamed due to concerns over COVID-19.

In the series about people living with mental illness, Kim plays Gang-tae, who works as a caretaker in the psychiatric ward of a hospital. Gang-tae, who also cares for his autistic brother at home, is reluctant to pursue any romantic relationships.

Actress Seo Ye-ji plays Mun-young, a bestselling children’s book author who has a personality disorder. While Mun-young is apparently unable to love anyone, Gang-tae seems to be able to melt her cold heart as the two become a source of healing for each other.

“(Mun-young) pursues a unique style. It’s not to show off herself but it’s like a defense mechanism. She’s telling people to not to approach her or talk to her,” Seo said.

Actor Oh Jeong-sae, who recently won best supporting actor on television at the Baeksang Arts Awards for his role in the KBS drama “When the Camellia Blooms,” stars as Gang-tae’s older brother Sang-tae. Rookie actress Park Gyu-young stars as a nurse who falls for Gang-tae.

“I think the title says it all. I feel everyone, including myself, in this world is a little bit mad in some ways and I wanted to take the chance to think about whether this is actually bad or not,” the series’ director, Park Sin-woo, said.

Quoting screenwriter Jo Yong, Park said the drama was “an apology to people with disabilities.”

“We often judge other people and hurt them, and the writer says she wrote the script based on her own experiences, wanting to face those people properly,” the director said.

“I hope that, after watching the 16 episodes, people will want to befriend disabled people rather than trying to help them,” Oh said.

“I wanted to show how Gang-tae is healed of his inner wounds,” Kim said. “There are many different stories and forms of love in the drama, and I hope the viewers can also heal their own wounds following them,” Kim said.