In a survey conducted by local pollster Realmeter, Moon’s approval rating came to 64.3 percent in the fourth week of April, the highest figure since September 2018.

Surveys conducted earlier by other pollsters show similar results. In a poll conducted by Gallup Korea two days before the April 15 general elections, Moon’s approval rating was found to have risen for seven consecutive weeks to 59 percent.

In the Gallup poll, respondents gave the government’s COVID-19 response as the most common reason for holding a positive view of Moon, with 54 percent of those approving of Moon citing it as their reason.

While Moon was accused of inaction in the early days of the epidemic for not barring entry to travelers from all areas of China, the government’s response gradually won over the public. 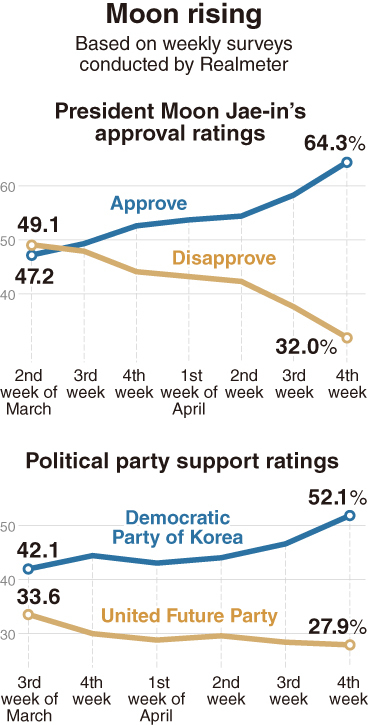 In January, before the situation here became serious, government officials had met with leaders of local biotech firms to develop test kits for the disease. The government then eased regulations to enable the kits to be put to use quickly, and worked with local governments and the private sector to quickly set up isolation facilities.

The government was also quick to draw up measures to soften the blow to the economy. Since February, Moon has held various economy- and business-related meetings to draw up economic measures. He has held five emergency economy meetings since mid-March.

The emergency economy meetings resulted in the government drawing up support packages worth over 200 trillion won ($163 billion), including the much-contested “disaster basic income.”

Although the disaster subsidy initially caused friction between the ruling party and the government, Moon is said to have effectively acted as the mediator.

The ruling party had pushed for subsidies for all citizens, while the government favored the original plan of excluding the top 30 percent income bracket. However, the government appears ready to extend the subsidy to all, in return for the ruling party coming up with legislative means to encourage those who can do without to “donate” their share. While the idea had been proposed before, Moon is said to have been instrumental in the plan’s acceptance by the government and the ruling party, according to Cheong Wa Dae officials.

The Moon administration’s COVID-19 response, both epidemiological and socioeconomic, has drawn praise from world leaders. According to Cheong Wa Dae, Moon has held telephone conversations with leaders of other countries and international organizations on 22 occasions since Feb. 2 with regards to Seoul’s COVID-19 response, and many more that centered on South Korea’s COVID-19 test kits.

“You were better prepared. The measures were more effective, that Korea had equipped itself and was not only ready but had the necessary infrastructure,” OECD Secretary-General Angel Gurria said in a recent interview with a local broadcaster.

“The world has a lot to learn from Korea and you can see there’s no division between the economy and the war against the virus.”

The impact of Moon’s rising approval rating, which helped raise the profile of many ruling Democratic Party figures, was also clearly visible in the results of the recent general elections.

The April 15 general elections ended in a sweeping victory by the ruling bloc -- the Democratic Party and its satellite Citizen Party. The two parties took 180 of the National Assembly’s 300 seats, becoming the largest ruling bloc since the early 1990s. Holding 60 percent of all seats, it will be able to conduct all parliamentary procedures without the opposition’s cooperation, with the exception of revising the Constitution.

According to some observers, Moon’s rising popularity was also a factor in the failure of the main opposition United Future Party’s campaign to sway voters. In the run-up to the elections, the main opposition used the tried and tested strategy of “passing judgment on the administration,” when public opinion was leaning in favor of the administration.