Regionalism, two-party dominance back to politics in S. Korea 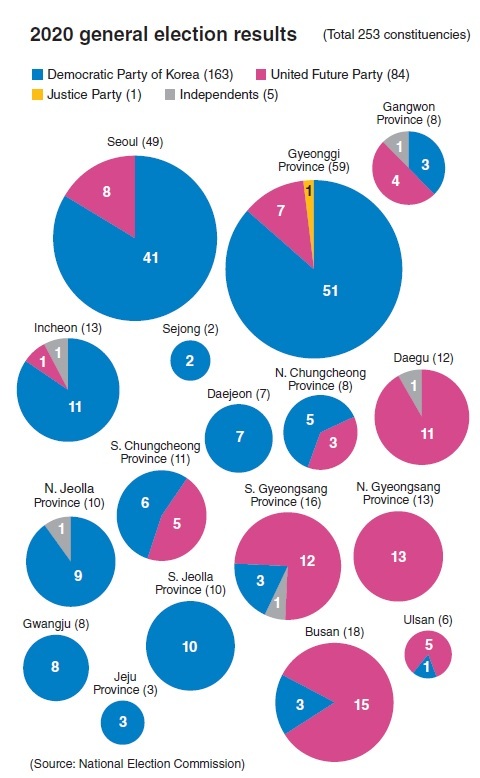 This year’s parliamentary elections in South Korea, held amid the COVID-19 pandemic, solidified the dominance of its two major parties but laid bare the deep-rooted regionalism and saw a record number of female candidates taking constituencies.

Although electoral reforms led to the overcrowding of the field, with 35 parties putting forward candidates, the race was between the governing Democratic Party and the main opposition United Future Party, and the former came out with an unprecedented sweep of 180 seats out of 300 up for grabs.

The ruling liberal party and its sister party bagged 180 wins -- 163 constituencies and 17 proportional representation seats -- in the unicameral National Assembly in what is seen as a show of support for President Moon Jae-in’s handling of the COVID-19 outbreak.

The main opposition secured a total of 103, 84 in constituency races and 19 in proportionate representation via its satellite group Korea Future Party. Only three other parties managed to produce a lawmaker -- Justice Party with six and two others with just three seats.

By region, the Democratic Party made a strong showing in Seoul, Gyeonggi Province and Incheon, home to nearly half of the country’s population, grabbing 103 out of 121 constituency seats.

In the country’s densely populated capital, the ruling party candidates secured 41 out of 49 seats, with the United Future Party taking the rest. In Gyeonggi Province, the ruling party took 51 out of 59 seats. In Incheon, it won 11 out of 13 seats.

The election results also showed an ideological division along geographical lines in the country’s southern regions -- a return of regionalism that appeared to have faded out in the parliamentary elections four years ago.

The left-leaning Democratic Party took the majority of the constituency seats -- 27 out of 28 -- in Gwangju and the two Jeolla provinces, traditionally perceived as liberal strongholds.

The right-leaning United Future Party, on the other hand, won the most seats -- 56 out of 65 -- in Busan, Daegu, Ulsan and the two Gyeongsang provinces. The Democratic Party earned zero seats in Daegu, which was once the country’s epicenter of the coronavirus outbreak.

In Chungcheong Province, which is considered as a swing vote region, 20 out of 28 seats went to the Democratic Party.

In this year’s elections, a record number of women were elected to the parliament through direct contests with 29 seats, accounting for 11.4 percent of the total constituency seats. Some 209 female candidates ran for constituencies. With proportional representation seats combined, there are 57 women elected, representing about 19 percent.

Some 11 people elected to the parliament were in their 30s or younger, a sharp rise from three in the 2016 elections.

Two people in their 20s were elected to the parliament through proportional representation votes -- one from the Democratic Party’s sister party and one from the Justice Party. There were no 20-something candidates elected in the previous five parliamentary elections.

The number of people elected for the first time was 152, up 20 from the previous elections.