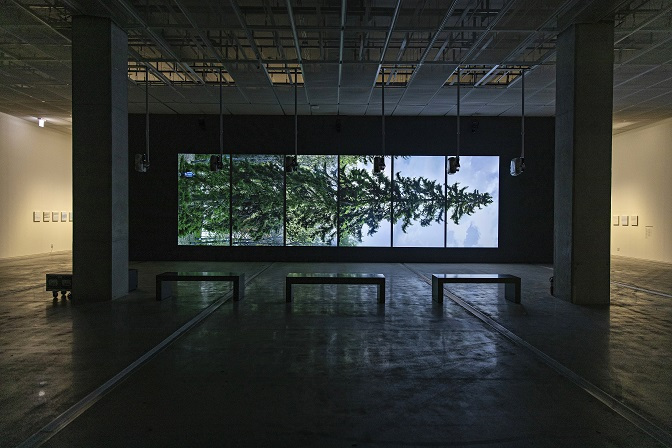 "Horizontal-Vaakasuora” by Eija-Liisa Ahtila (MMCA)
In this time of strict social distancing, the National Museum of Contemporary Art, Korea, is offering an Instagram preview of its latest exhibition, “Axis of Horizon.”

A 30-minute live preview of the exhibition, guided by curator Yang Ok-kum, will be available Thursday at 4 p.m. on the museum’s Instagram channel (@mmcakorea). The full exhibition, originally scheduled to open in early April at the Seoul venue, is on hold due to the COVID-19 outbreak.

The exhibition features more than 70 artworks from 17 artists from South Korea and abroad that MMCA has newly acquired. The pieces deal with understanding nature and have been organized into three sections: “The Whole of Parts,” “The Volume of Phenomena” and “The Other Side of Places.”

A representative work from Finnish visual artist Eija-Liisa Ahtila, “Horizontal-Vaakasuora,” in which a life-size spruce tree appears horizontally on six video screens, falls within “The Whole of Parts.” Ahtila used six screens to demonstrate the limits of technology in fully delivering nature’s beauty.

Based in Europe and the US, Ahtila is internationally known for her solo exhibitions at the Tate Modern in London and Guggenheim Museum Bilbao in the Spanish city of Bilbao, as well as for international art events such as the Venice Biennale in 1999 and 2005.

The artworks in the second part of the exhibition, “The Volume of Phenomena,” explore different natural phenomena such as water, ice, air and smoke. “Penetrable” by Jesus Rafae, a Venezuelan visual artist, elicits audience participation by allowing visitors to pass through plastic hoses that are suspended from a steel grid to give a sense of walking in the rain.

“The Other Side of Places,” the third part of the exhibition, includes “Ghost Island” by Map Office, a Hong Kong-based duo consisting of Moroccan artist Laurent Gutierrez and French architect Valerie Portefaix. The work, made up of 9 meters of ghost fishing nets collected in the sea near Krabi, Thailand, addresses the issue of marine ecosystem destruction caused by marine pollution.

The MMCA remains closed until April 19 as part of the government’s strict social distancing policy. The date of reopening is yet undetermined.