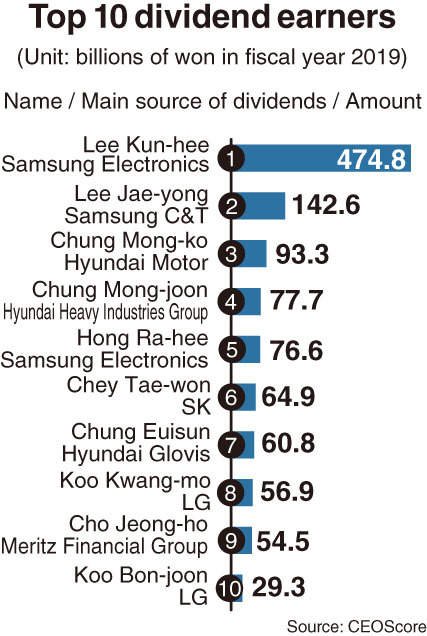 The father and son at the helm of South Korea’s largest conglomerate, Samsung Group, remained the top two dividend earners in 2019, according to data released by corporate tracker CEOScore on Wednesday.

Samsung Electronics Chairman Lee Kun-hee, bedridden since 2014, received 474.8 billion won ($391 million) in dividends last year, a figure that remained almost unchanged from a year earlier. Most of the dividends came from the tech company, in which he holds a 4.18 percent stake. Vice Chairman Lee Jae-yong was next on the list of top dividend earners with 142.6 billion won.

Of the nation’s companies, Samsung Electronics paid out the largest amount of dividends in 2019, 1.05 trillion won. Chipmaker SK hynix was next, having paid 684 billion won.