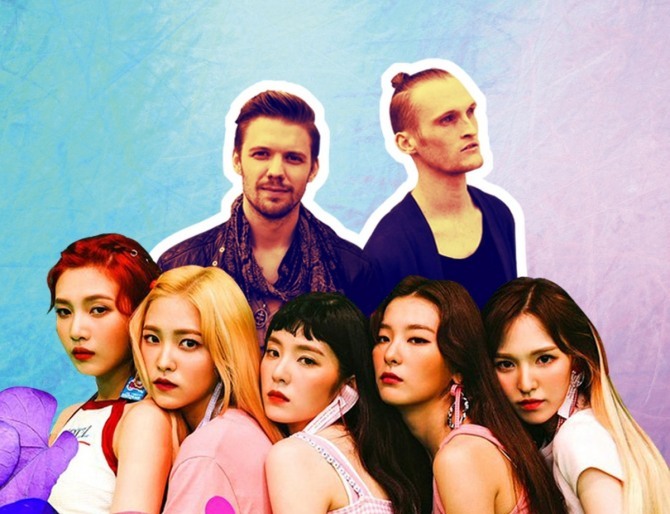 Girls’ Generation, SHINee, Loona and TVXQ -- some of these biggest names in K-pop have one thing in common. They’ve released a song from Swedish songwriting duo Caesar & Loui, or Daniel Caesar and Ludwig Lindell.

Since the two began working in music professionally in 2013, they have churned out a great number of hits.

Their most memorable track yet? It’s Red Velvet’s 2017 mega-hit single “Red Flavor.” The song was a chart success, topping streaming charts both in Korea and abroad as well as winning multiple prizes at awards ceremonies.

“We made the track thinking of Little Mix and some Beyonce inspiration from her more percussive songs as well. The song, of course, received great critical acclaim and won many prizes so that’s also a big factor,” the duo said in an email interview with The Korea Herald.

And after years in the shadows by losing lead track competition to “Russian Roulette” and “Rookie” -- Red Velvet’s previous singles -- “Zimzalabim,” one of the duo’s early creations, came to see the light of day front and center off the group’s new EP “The ReVe Festival: Day 1” released in June. At a press conference, Red Velvet said S.M. Entertainment’s chief producer Lee Soo-man “became certain that the group is ready to pull the track off.”

“We wanted to create an anthem-like song that had many different parts and had a lot of fun energy,” the songwriting duo said of “Zimzalabim.”

According to the creators, the track -- which comes with an intense buildup before bursting into a multilayered chorus -- has more “dark sounds” and “dynamic rhythms” compared to “Red Flavor,” which is more pop and happy.

“We heard ‘I Got a Boy’ by Girls’ Generation in the early days of our K-pop writing and came up with the idea of ‘Zimzalabim.’ It was a blast writing it. We felt very free with our creative ideas.”

The production of the track has had no shortage of creativity either, as the song was given uniquely quirky lyrics and a music video centered on a magical theme park.

“For us, the best feeling is to watch the song being released on YouTube with amazing music videos and dance moves. We were completely mind blown by all the attention it received and how the video looked. To us, it feels very special to be a part of something like that.”

The best friends-turned-songwriters hail from Sweden, home to pop legends like ABBA and Max Martin, both of whom are some of their biggest musical inspirations.

When asked about how Sweden does pop so well, they shared their two cents.

“We have a very melodic language when we speak and also our society is very well-balanced so you can get student loans and study, for example, to become a songwriter and musician.”

And it was around six years ago that the two began their musical career together, especially focusing on burgeoning K-pop.

“A lot of our friends (in Sweden) were already making K-pop music so we got inspired by their songs,” they added.

Though not exclusively, the two have worked extensively with S.M. artists -- Red Velvet, f(x), Super Junior, EXO-CBX and TVXQ to name a few. And S.M., which is South Korea’s largest entertainment company, is known for its song camps, during which artists work with a group of international songwriters and producers to create music more effectively.

“In the camps, S.M. gives us information about what an artist is looking for (in) songs and then we try to write something that fits. We never know if the song will end up on that artist or someone else,” the duo said. “We think the openness is very smart of S.M. since the world is developing towards (working together) all the time.”

K-pop groups often have many members, and the duo added the sheer number of them in general is another factor to be considered.

“Writing for EXO, for example, we know the members’ unique style and try to get parts in the song that would fit them,” they said, citing nine-piece EXO as one of the artists they want to work with for future projects.

They added several other factors, like language, the usual rap parts and having a more multilayered general makeup of the song, make K-pop special and unique, even though there is a fine line between K-pop and Western pop these days.

“The K-pop trend is crazy right now and we didn’t see that coming even though of course we knew it would get bigger and bigger. It’s amazing to see and we’re honored to be a part of it.”