In a dramatic rescue mission, Cheonghae’s commandos stormed a Korean tanker that had been hijacked by pirates off Somalia. All 21 crew members were rescued, and eight of the 17 pirates were killed. Five more pirates were captured, and four escaped. The tanker’s captain, Seok Hae-gyun, was badly wounded but survived and became something of a national hero for his bravery during the rescue operation.

The 300-strong Cheonghae, starting Tuesday, will safeguard the Strait of Hormuz, a narrow body of water linking the Persian Gulf to the Gulf of Oman, which feeds into the Arabian Sea. Over 20 million barrels of oil pass through the strait, including many bound for Korea.

That means Cheonghae’s scope of operation will increase 3.5 times, stretching from the current Gulf of Aden off Somalia to the Gulf of Oman, the Strait of Hormuz and further to the Persian Gulf.

The forces will conduct independent operations, according to the Defense Ministry, and will not officially join a US-led coalition known as the International Maritime Security Construct. It sent two Korean liaison officers to the IMSC and will cooperate if needed. 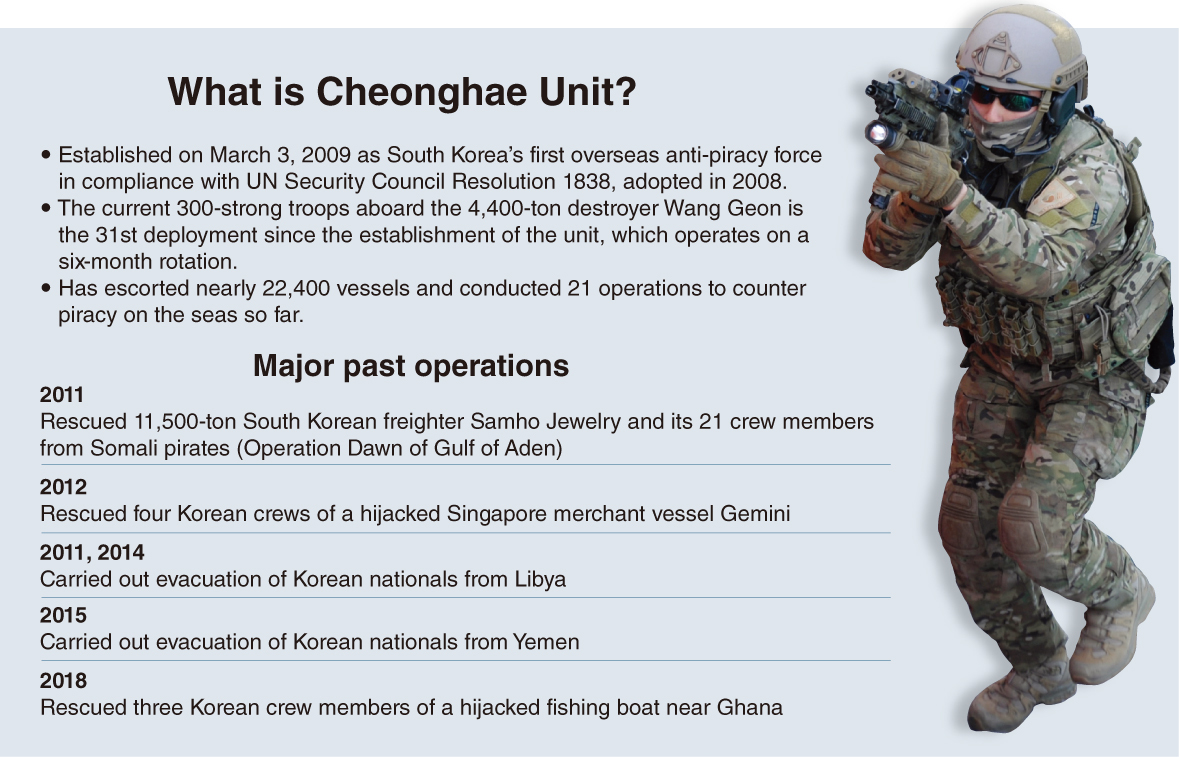 The priority is to “guarantee the safety of our people and the freedom of navigation of our vessels,” the Defense Ministry said in a press release.

Cheonghae has been stationed in the Gulf of Aden since 2009 to protect civilian ships from piracy as part of the US-led multinational Combined Task Force 151, involving 33 countries. It also conducts joint military drills with the European Union’s maritime security operations.

The unit is composed of 300 people, many of them special forces, and had traveled a total of 1.95 million kilometers as of Feb. 2019. The Cheonghae unit has escorted nearly 22,000 vessels and implemented 21 operations to deter piracy at sea. Since its first deployment on March 3, 2009, 8,478 sailors have served in the contingent based on the 4,400-ton destroyer, which operates on a six-month rotational basis.

In Operation Dawn of Gulf of Aden in January 2011, the unit rescued 21 crew members of the ship Samho Jewelry from Somali pirates. It also helped Korean nationals evacuate from Libya in 2011 and 2014, and from Yemen in 2015. It also rescued three Korean crew members of a hijacked fishing boat near Ghana in 2018. The 31st batch of troops on the warship Wang Geon, which left Korea in December, will switch places with the 30th batch on the Kang Gam-chan destroyer at around 5:30 p.m. on Tuesday to carry out the operation that now extends to the Strait of Hormuz.

The guided missile destroyer Wang Geon has been dispatched seven times as part of the Cheonghae unit, making it the most active of all the destroyers Korea has sent to the region. The latest batch of troops is composed of special forces, including an underwater demolition team, a Navy SEAL team, Marines and Navy pilots. Of the 300 service members, 72 have previously been deployed as part of the Cheonghae unit.

Korea has sent some 1,095 personnel to 12 countries to carry out peacekeeping missions and monitor armistices. There are four overseas units: Hanbit, Dongmyeong, Akh and Cheonghae.

Two units, the Army’s 280-person Hanbit unit in South Sudan and the 331-person Dongmyeong unit in Lebanon, are part of the United Nations peacekeeping mission, both on an eight-month rotation basis.

The 149-personnel Akh unit has been stationed in the United Arab Emirates since 2011 to train UAE special forces and conduct joint exercises.

Since South Korea’s first overseas deployment during the Vietnam War in 1964, it has sent over 364,461 service members to 14 regions around the world.