Hurdles include US-led sanctions, Pyongyang’s lack of interest in engagement

Key officials in Seoul have reaffirmed a renewed push for engagement with the North, after President Moon Jae-in said stronger inter-Korean cooperation could break the nuclear impasse between North Korea and the US and pave the way for international sanctions to be lifted.

Lee Do-hoon, special representative for Korean Peninsula peace and security affairs, said the government would discuss the issue with the US.

“I am planning to talk with Biegun about (individual tours),” Lee told reporters upon arrival at Dulles International Airport in Washington on Wednesday (US time), referring to US Deputy Secretary of State Stephen Biegun. Lee will be in Washington through Saturday.

“(Individual tours) are not banned under the UN Security Council Sanctions. The reason why we are discussing (this matter) with (the US) is that we are trying to find space while we respect the sanctions framework agreed by the international community.”

Speaking at a New Year’s press conference Tuesday, Moon said he hoped to pursue inter-Korean projects that are not prohibited under the UN-led sanctions, such as border cooperation, sports exchanges and individual tourism, namely tours to Kumgangsan in the North.

In 2017, the UN imposed strict sanctions on North Korea over its nuclear weapons and ballistic missile programs. Under the measures, member countries cannot import coal, iron ore, textiles, seafood, machinery or other key items from North Korea. However, tourism is allowed.

A limited number of travelers from other countries visit North Korea every year, but Seoul halted tourism to the scenic Kumgangsan in 2008 after a South Korean tourist was shot dead there.

Following Moon’s remarks, the Unification Ministry said the government was reviewing “various ways” to allow South Koreans to visit North Korea individually, as long as their safety can be guaranteed.

The ministry is also making a list of joint projects that Seoul and Pyongyang could possibly pursue independently regardless of sanctions, though it did not reveal details about any of those projects.

“How the North will respond is the most critical thing, so we will keep a close eye on the North’s attitude and the situation and come up with a realistic solution,” a ministry official said on condition of anonymity.

Asked whether the government was planning to undertake any specific inter-Korean project that would require a sanctions exemption from the UN, the official said it was “too early on.” . 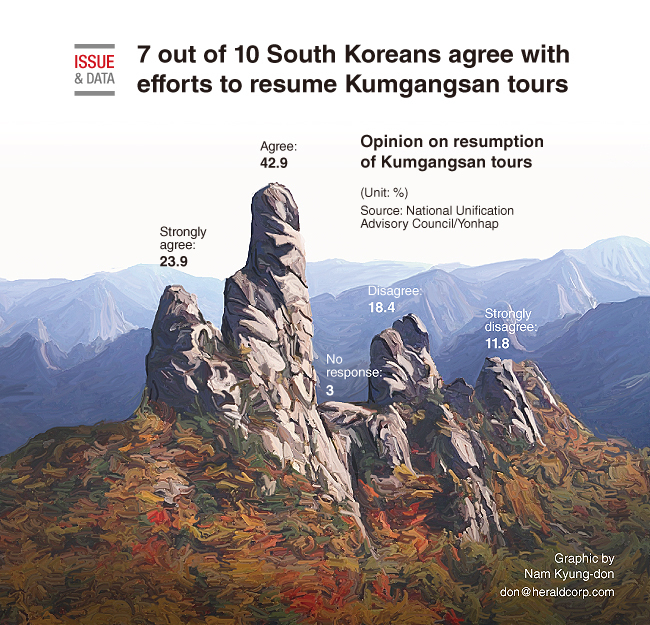 Regarding Seoul’s ambitions, Washington emphasized close coordination between the US and South Korea on all efforts related to North Korea.

“We are committed to close coordination on our unified response to North Korea. All UN member states are required to implement UN Security Council sanctions resolutions,” an official from the State Department was quoted as saying on Voice of America, suggesting the envisioned individual trips are to be discussed between the US and South Korea.

On Tuesday, Foreign Minister Kang Kyung-wha met with US Secretary of State Mike Pompeo and delivered Seoul’s position that there are inter-Korean projects that are free from restrictions and some could be exempted from sanctions. She added that the US fully understood South Korea’s position.

“Our basic stance is that North Korea-US talks and inter-Korean dialogue should complement each other in a virtuous cycle,” Foreign Minister Kang Kyung-wha told reporters after meeting with Pompeo in the US on Tuesday.

US-led sanctions aside, Pyongyang’s lackluster response remains a hurdle. In October, North Korean leader Kim Jong-un asked South Korea to remove all facilities built by the South at Kumgangsan. In response Seoul offered to engage in talks with Pyongyang, but the North insisted on discussing the matter only in writing and sent out an ultimatum indicating that it could unilaterally destroy the facilities.

“We are at a stalemate. There hasn’t been any progress since then,” said a Unification Ministry official on condition of anonymity.

Since the collapse of a US-North Korea summit in Hanoi, Vietnam, last February, the North has said no to any suggestions from the South, including offers of food assistance and inter-Korean family reunions.

And with the regime’s latest warning to the South not to “meddle” in the Washington-Pyongyang relationship, it remains unclear whether Pyongyang will respond to any of Seoul’s proposals.