Though the monetary policy committee of the Bank of Korea cut the key rate to 2 percent in 2009 in the wake of the 2008-09 global financial crisis, the figure went into normalization in the early 2010s to reach 3.25 percent during the 2011-2012 period.

Most analysts shared the view that the Korean economy had been resilient to negative external factors on the back of its robust fundamentals.

But the nation started entering a low-rate era in 2014, when the previous Park Geun-hye administration pushed for stimulus policy by easing regulations for the construction and real estate sector. 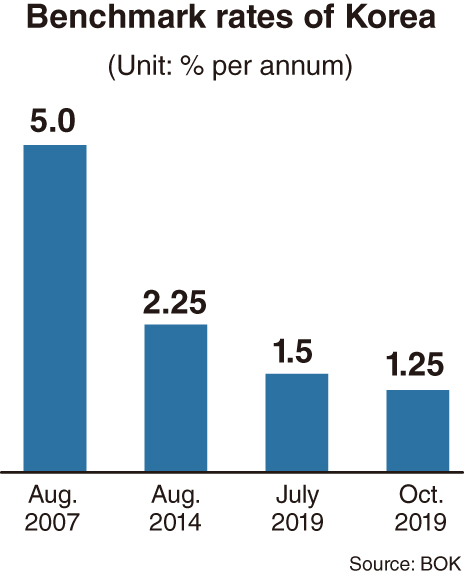 BOK Gov. Lee Ju-yeol, who took office in April 2014, and the other rate-setters were also cooperative with the then-administration’s policy direction by continuously taking a dovish stance in interest-rate policies.

Starting from August 2014, the central bank cut the base rate by 125 basis points until June 2016, when the rate slid to 1.25 percent. This marked the lowest level in history.

The situation in the mid and late 2010s has caused rapid growth in apartment prices. Under the Park administration, a large portion of households purchased apartments via mortgages as the Land Ministry and financial regulators eased lending rules or other terms drastically.

The Moon Jae-in administration, which took office in May 2017, failed to curb the heated real estate market. Moreover, apartment prices -- particularly those in Seoul -- have skyrocketed due to ineffectual regulations pushed by policymakers.

The monetary policy also took a significant part in the housing bubble: Though the BOK reiterated the necessity of easing the benchmark rate amid the economic slowdown, the nation saw huge funds -- involving speculative capital -- in the market flow into the property market without experiencing an apparent improvement in private consumption or corporate facility investments.

More households joined the movement to buy apartments under the Moon administration, despite tough loan regulations, as they experienced worries that they might not able to own homes amid continuously climbing Seoul housing prices.

“The monetary-easing brought about the Korean won’s weakness against key currencies such as the dollar and yen,” said a capital market analyst. “And this aggravated the weakness of the purchasing power of ordinary households, many of which are saddled with huge financial debt on mortgages.”

Skeptics among the online community claim the government has not been willing to curb apartment prices. “The government has glossed over the most powerful policy -- which is rate hikes -- to roll back housing prices,” a commenter said.

A real estate agent said the interest rate, under 2 percent, is something that homeowners with mortgages still appear to be willing to tolerate in terms of monthly interest payments. “They have pinned hopes on future policies, which may keep the interest rate at a record-low level amid the low GDP growth.”

Korea’s 2019 gross domestic product growth is expected to mark its lowest score in 10 years, since it stood at 0.8 percent in 2009. This could indicate that the rate setting has failed to act as a remedy for economic growth, instead adding kindling to the real estate market.