That’s why we’ve put together a list of 15 Christmas-themed tracks with a little K-pop twist to usher in one of the most celebrated holidays around the world. 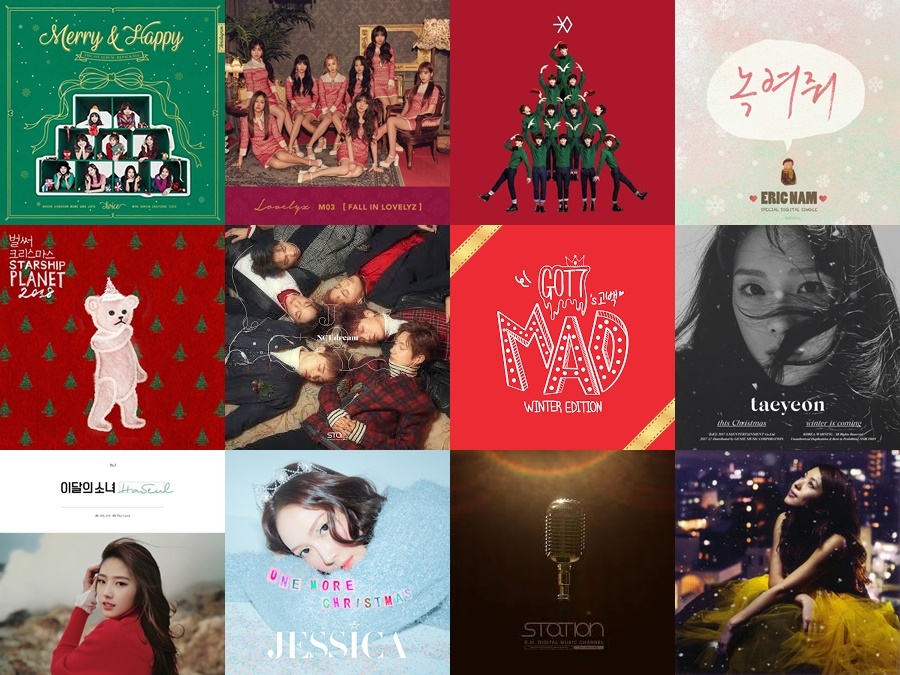 Our first choice is Twice’s 2017 track from the repackaging of the group’s first studio album of the same title, “Merry & Happy.”

Released Dec. 11, 2017, the midtempo song featuring the sound of bells and uplifting beats captures the hopeful and festive spirit associated with the year-end season around the holiday.

Without the help of heavy choreography or dramatic video effects, the Christmas-themed video that features the bandmates hanging out around a Christmas tree has racked up over 30 million views.

NCT Dream’s 2017 single is their modern take on two Christmas classics – “Jingle Bells” and “Joy to the World.”

Through the nearly three-minute track, the group brings in festive feelings in a K-pop fashion with the help of upbeat rapping, dramatic verses and an upbeat chorus.

Last year artists at Starship Entertainment got together and released yet another Christmas single under the name “Starship Planet.”

With the supergroup combining artists of various genres, the song itself crosses the lines of R&B, pop and jazz.

The song talks about the approaching winter and missing someone dearly: “I need you, I want a Christmas Day with you.”

The lead single from Lovelyz’ 2017 album “Fall in Lovelyz” is a bubbly dance pop number with hints of Christmas sprinkled all over.

While “Twinkle” might not fit the traditional image of a carol, this ball of high energy in the form of a four-minute track is guaranteed to lift up the mood and get you dancing.

“Confession Song” is the lead track from the seven-piece group’s repackaged winter edition of “MAD.”

Written by none other than J.Y. Park, aka “The Asiansoul,” the romance-tinged track is sung from the perspective of a guy who gathers up courage to ask a girl out. The storyline is also reflected in both the lyrics with the repeated chorus that goes “I love you,” as well as the music video shot at a school.

“Timing” is a Christmas single from labelmates of WM Entertainment -- B1A4, Oh My Girl and ONF. The straight-up synth-pop tune comes with a smooth and polished sound that makes for easy listening.

Headlining the third EP of Girls’ Generation-TTS from 2015 is a multilayered track that starts off as a romantic R&B ballad before smoothly switching to a cheerful carol as the jazzy sound dominates the track throughout.

BTOB’s 2014 single is for those who dread spending Christmas on their own, as the relatable lyrics talk about how Christmas is back again -- despite being single and with couples all around.

The single with a rather self-explanatory title was released by HeeJin, HyunJin and HaSeul of Loona in 2016.

“The Carol” was the second track of the group’s third single as part of an 18-month predebut project. The song was given the music video treatment in which the three members go shopping, all wrapped up in fashionable coats.

The video featuring the 31-year-old singer sporting a red sweater and a pair of jeans working in a studio is a great addition to your playlist.

The song from the former Girls’ Generation member was released in 2018 as a collaboration project with cosmetics brand “Amuse,” or which she is the face. The cheerful track talks about spending Christmas together with a loved one.

Released in December 2013, the Korean version of the ballad track from EXO was sung by D.O., Baekhyun and Chen, and the winter-themed accompanying music video has been viewed more than 49 million times.

"Have Yourself a Merry Little Christmas” -- Wendy, Jay JungJae Moon and Nile Lee.

Wendy of Red Velvet teamed up with Jay Jungjae Moon and Nile Lee to record a Christmas classic from the 1940s.

The song has been sung by the likes of Frank Sinatra and Sam Smith, and Wendy’s jazzy version features a gorgeous string and piano interlude that adds an extra layer of ambience.

Whether “Merry-Chri” qualifies as K-pop is up for debate, as the song was released both in Japan and Korea in December 2004.

But it’s undebatable how good a ballad it is.

The single has aged well, particularly in Japan where it has enjoyed long-term success, appearing in local charts around Christmas for years after its release and becoming one of the country’s Christmas favorites.

The slow number from Taeyeon’s Christmas album, “This Christmas: Winter is Coming,” is an orchestra-backed winter power ballad. The track begins with Taeyeon’s calming voice before building up into a dramatic chorus.