[Monitor] Half of Korean firms plan to downsize in 2020 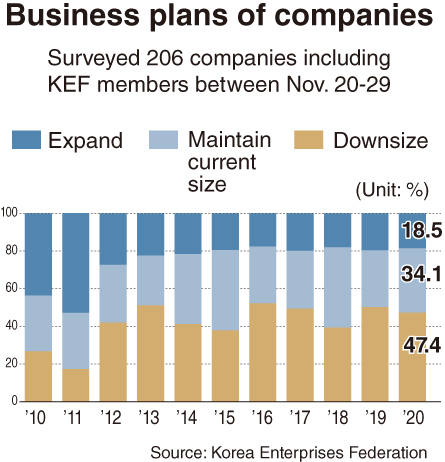 The majority of South Korean firms foresee the current economy entering a long-term slump with half of them planning to downsize next year, a survey by the Korea Enterprises Federation led by Chairman Sohn Kyung-shik, who is also CJ Group chairman, showed over the weekend.

In the survey, 64.6 percent said the current economy was heading for a long-term recession.

Nearly half, or 47.4 percent, said that they plan to downsize their businesses next year, followed by 34.1 percent who will maintain the current level. Only 18.5 percent said they plan to expand their operations.

By size, 50 percent of the firms with at least 300 employees said they would downsize. The same proportion of companies with less than 300 workers said the same.

In the past, businesses downsized between 2016 and 2017, before choosing the maintain their business scope.

By details, companies said they would take cost-saving measures (29 percent), streamline the workforce (25 percent), cut back on new investments (15.3 percent) or restructure their businesses (13.7 percent).