The basics had dominated South Korean consumers’ priorities, with the vast majority of consumers here listing their top concern as one of food, clothes or housing. 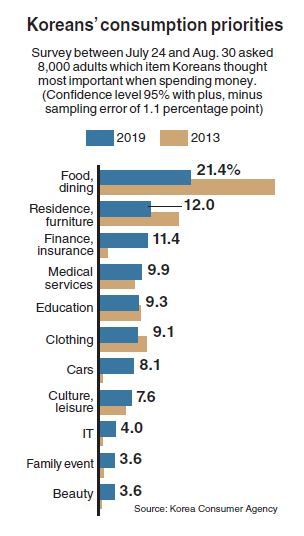 Food still topped the most recent survey by the Korea Consumer Agency, with 21 percent of 8,000 respondents listing it as the most important category. But this was a fall of almost half from the 2013 figure of 40.8 percent.

But clothing lost its third-place ranking to financial and insurance products, which entered the top three for the first time in six years, with 11.4 percent of consumers listing it as their main priority.

Consumers’ rate of satisfaction with items in general was 69.9 percent, lower than the 2017 average of 76.6 percent.

Food won the highest number of satisfied consumers, with 71 percent happy with their purchases, with financial and insurance products following on 67.9 percent. But consumers also experienced were least satisfied with food and dining services, followed by tech services and clothing.

The study also showed that Koreans purchase items from convenience stores the most -- 6.9 times a month -- as against supermarket chains (4.6) and local markets (3.8). They also shopped via their smartphones 3.3 times a month and online platforms 2.8 times a month.

By region, the satisfaction level of Korean consumers was the highest in Daegu with 76.8 points, followed by Busan (73.4) and Ulsan (72.2). Their satisfactory level on Jeju Island was the lowest at 62.8 points.