By Cho Chung-un
Published : Nov 6, 2019 - 16:23       Updated : Nov 6, 2019 - 16:35
A majority of foreign companies and investors in South Korea feel unsatisfied with the business environment here in general, particularly with labor policies, a lack of local experts for research and development and language barriers, a study showed Wednesday.

According to the report from the Korea Trade-Investment Promotion Agency, only 26.7 percent of foreign companies were “satisfied” with the business environment, the rest answering either “moderate” or “unsatisfied.” 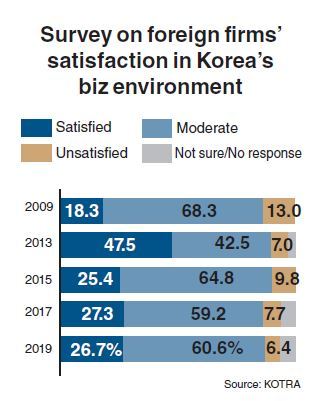 The percentage of foreign companies content with the business environment was lower than the 2017 survey of 27.3 percent and 20.8 percentage points less than the same survey conducted in 2013. KOTRA surveyed 345 executives of foreign-invested companies in South Korea this year.

Satisfactory levels in categories of labor policies and environment for R&D and innovation were the lowest at 18.3 percent each. Those who were satisfied with intellectual property protection, tax, regulation and administration processes were under 30 percent, it added.

Meanwhile, the percentage of foreign investors satisfied with South Korea’s business environment in terms of location, efficiency in logistics and advancement of financial market were relatively high with 43.2 percent, 35.7 percent and 31.7 percent, respectively.

High labor costs, manpower shortages and militant labor were cited as major hurdles in doing business in South Korea, as well as lack of experts for R&D projects.

When asked of reasons for downsizing investment here, 41.5 percent of respondents cited dwindling domestic market size and worsening performance. They also pointed to a language barrier as an obstacle in doing business and wanted to see improvements in visa issuance and immigration services, saying the country has strict conditions for acquiring and extending visas.

“Environment for businesses and living conditions have been improved compared to the past, but it is true that the country has more labor-related regulations and administration processes than competing countries,” said an industry insider.

“Complaints on labor policies of the incumbent administration seem to have grown.”

Vice Industry Minister Cheong Seung-il said at the annual Foreign Company Day held Monday that the government will expand regulatory sandbox programs and incentives for foreign investors, vowing the country will become the “optimal destination” for them.

Regulatory sandbox refers programs that provide more leeway for companies to speed up commercialization of new technologies in the market.

The foreign direct investment pledged here reached a record high $26.9 billion last year, according to the Ministry of Trade, Industry and Energy.