BTS on Tuesday staged the grand finale of its “Love Yourself” series in Seoul, wrapping up a yearlong world tour that kicked off in the capital of band’s home country.

Tuesday’s show at Seoul’s Olympic Stadium was the last of three sold-out shows of BTS’ “Love Yourself: Speak Yourself” stadium tour, an extension of “Love Yourself,” which kicked off in August on the same stage last year.

When BTS started this tour, they had already achieved success that no K-pop group had reached, topping the US charts and nabbing prizes at award shows. But during 14 months of touring -- where they performed in 23 cities in Asia, America, Europe and the Middle East to a total of more than 2 million concertgoers -- they have truly achieved a status of their own. The group was invited to the Grammy Awards, topped the charts in the US and UK with the latest album, took multiple trophies home at the Billboard Music Awards, and sold out colossal venues like London’s Wembley Stadium and California’s Rose Bowl Stadium.

“I think I will be very sad not to be able to do this ‘Love Yourself: Speak Yourself’ tour in the future,” said leader RM, who couldn’t hold back tears towards the end. “This ‘Love Yourself, Speak Yourself’ concept ends here, but the journey to search how to love ourselves will continue. So let’s hold hands and spend time together so we can love ourselves even more.”

Jin also got teary-eyed as he recalled his solo performance from earlier in the evening.

“When I sang ‘Epiphany,’ I felt sad thinking this might be the last time and became emotional as I sing,” he said. “As I was looking you from the stage, it made me smile as well, with mixed emotions of feeling relieved and sad.”

“With the energy you poured out on us, we will come back with new album and concerts in the future, and return your love” said Jungkook.

For around three hours, the septet performed the renowned 24-track list of the tour to ear-shattering screams, feverish chanting and waves of glowing “Army Bomb” light sticks.

The night kicked off with party anthem “Dionysus,” from the latest EP “Map of The Soul: Persona,” accompanied by super-sized inflatable silver jaguars on each side. BTS, wearing black and gray suits, danced against a backdrop of giant Greek columns to set the tone for the evening, followed by hip-hop banger “Not Today.”

“Hello we are BTS,” the group shouted, giving their signature greetings and looking elated to be back in Seoul.

“We are going to pour out all the energy that we have left today,” said V. “The tour that began in Seoul is ending in Seoul. The beginning is same as an ending. And because you are together with us, it will be a beautiful completion.”

“It’s hard to believe it’s already the 62nd performance. It’s just amazing,” said J-Hope. “Through this tour I felt so much and learned a lot, so I am very grateful.” 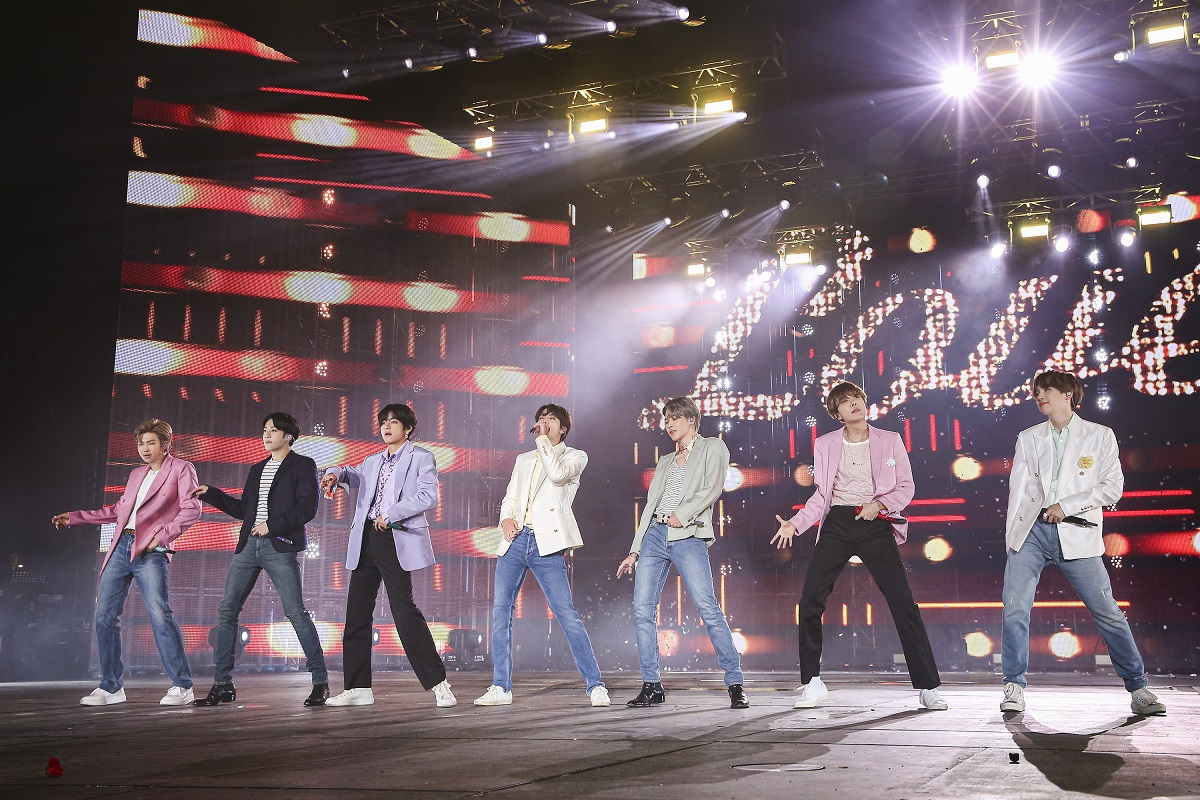 The night was bit chilly, but BTS warmed the hearts of the fans by delivering iconic hits like “Outro:Wings,” “Best of Me,” “Boy With Luv,” the electrifying medley of “Dope,” Silver Spoon” and “Fire,” “Fake Love,” “Mic Drop” and “Idol.”

The blankets that the organizers provided for the audience in partnership with sports brand Fila, and flames going off on stage for visual effect, also helped to ward off the weather.

At the Seoul rendition, each member showcased a new level of maturity in their solo acts, a product of the yearlong tour. J-Hope’s slick dance skills and powerful energy radiated during his “Trivia: Just Dance,” the singer pulling it all off in a cherry red-suit. Jungkook’s silky voice and graceful presence awed the crowd as he sang “Euphoria” and flew around the stadium on a zip-wire.

Jimin’s “Serendipity” was like a beautiful work of art, as the singer emerged inside a bubble and showed off balletic, lyrical dance moves, while RM commanded the stage during “Trivia: Love,” with his charisma and upbeat rap.

V’s “Singularity” was simply singular, as he told a beautiful story with his husky and soulful voice and movements. Suga’s “Trivia: Seesaw” showed he can not only rap and produce, but sing movingly. Jin’s “Epiphany” gave the audience chills as he reached the high notes.

The members also made sure to have fun time on the stage, being goofy with each other, such as when Jungkook, V, Jimin and Jin on the spot joined J-Hope’s latest solo “Chicken Noodle Soup,” showing off witty chicken choreography. 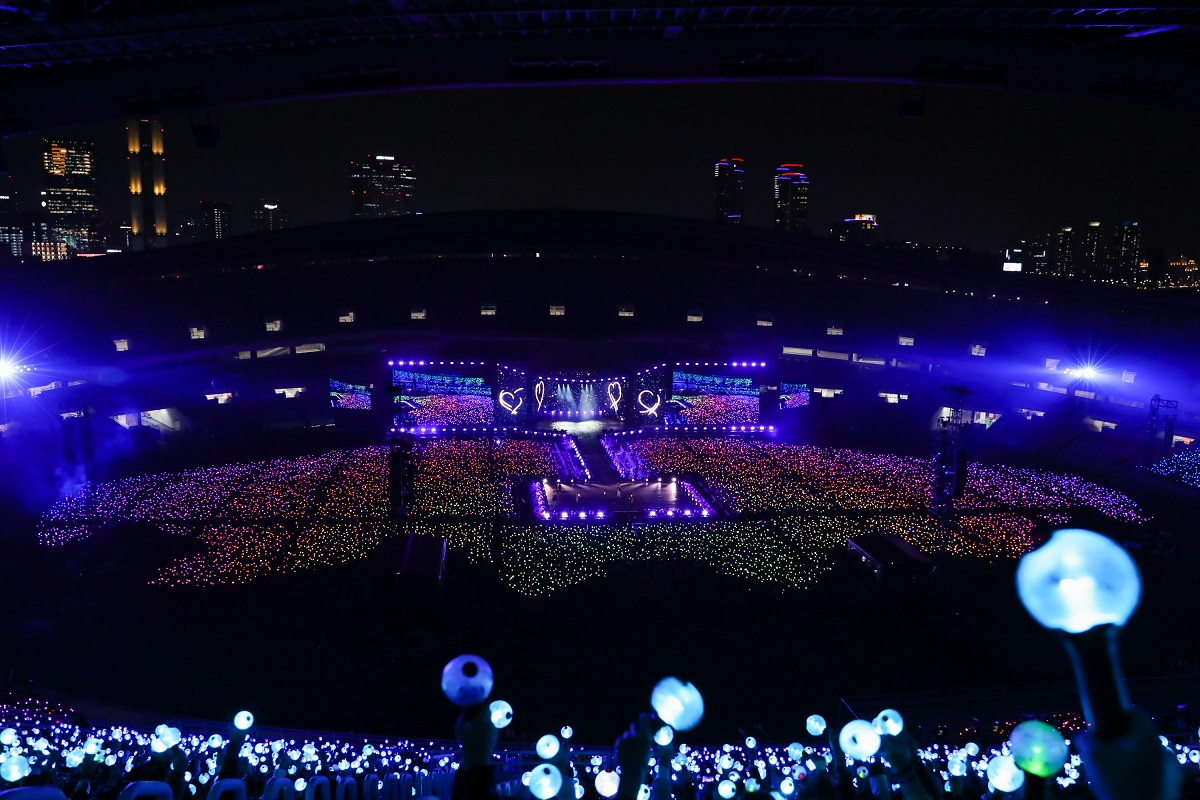 Throughout the entire concert, the members expressed their humble gratitude to fans, saying it would have been impossible without them.

“When I am with you guys I feel like I am in a different world and feel happy all the time,” said Jimin after comparing his favorite activities of dancing to feeling like he is at another place. “Thank you for making us another world.”
Calling the fans the universe and love of their lives, BTS finished the gig with star-inspired song “Mikrokosmos,” as 300 drones flew above the stadium and formed the shape of planets, a BTS symbol and an Army symbol. The night came to an end with beautiful fireworks, and members moving around the venue to bid fans farewell.